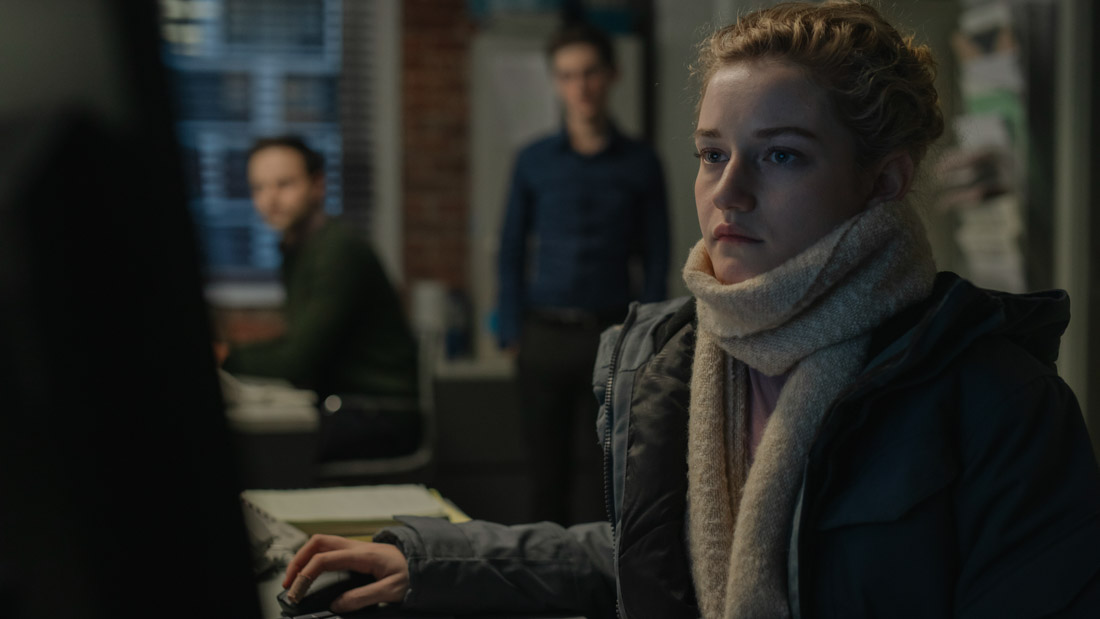 On day two of Sundance  two films unlike one another crossed-over in meaningful ways. Narrative feature, The Assistant, and Happy Happy Joy Joy: The Ren & Stimpy Story both look at how we allow for bad behavior in creatives in order to remain a part of something cool. Whether it is being an assistant to a shadowy figure never seen on screen like in The Assistant or working alongside John K long hours to animate Ren & Stimpy oblivious to his tastes in young girls.

While the Assistant is a subtle quiet film starring Julia Garner (of Ozark fame), its introspection of one woman’s experience working for a movie executive and what happens when the signs of his #metoo behavior begin popping up is powerful in its simplicity. The films metaphor of the office work being orderly and how it becomes chaotic as her internal turmoil begins is brilliant. The heightened sounds of a copier, the buzz of the lights, the drip of the coffee, becomes less soothing and more jarring as the story continues. The story itself is a bit on the nose of recent scandals without directly pointing fingers at it but an amazing Human Resources scene between Garner and Matthew McFayden (Pride & Prejudice) sums up the answer to how men have gotten away with it for so long perfectly. The women in the audience groaned audibly when McFayden delivers such a stereotypical line to keep her quiet. Bleecker Street is releasing this gem and Garner should see some love for this one. The film is directed by Kitty Green in her first foray into narrative after documentary success with Casting Jon Benet.

Now for Happy Happy Joy Joy, we delve for the first 90 minutes into the creation of the show, the many people who made it possible and the role Nickelodeon played in pulling out the two characters from a pitch the creator John Kricfalusi (known by fans as John K) made to them. We also explore the cautionary tale of a creative genius who is his own worst enemy. The film is directed by first-time feature directors Ron Cicero and Kimo Easterwood. For non-fans there is a quick summary of the show and its glorious madness with fans like Chris Gore of Film Threat and Jack Black. For fans like me, there is plenty to look back fondly on.

While the early write ups for the doc focused more on the #metoo incident, we are not even introduced to Robyn Byrd until an hour in and we don’t delve into her story until 90 minutes into the movie after giving John K a lot of talking points before hers. His second accuser, Katie Rice is referenced but never interviewed. The film feels like a way to set up the brand as “hey lots of people made this, not just the creator” while also noting the influence John K, as a flawed figure, made on the animation industry with a tack on of #metoo issues at the end. At first, I was annoyed by this development but then learned the film was being made and was almost completed when the news broke in 2018 and the directors knew they couldn’t leave it out. So they wove it in as well as they could to the larger story.

It is a hard line to have to walk for this documentary between acknowledging that many voices led to the success of Ren & Stimpy while focusing on the creative vision of a man fired from the show for his dictator behavior to employees and bridge burning with Nickelodeon executives. At a 2 hour run time, I feel a handful of small talking heads could be taken out as we establish early on that he was a jerk, he confesses to being one, and yet we revisit it about three times. In some ways, with the powerful female leadership around him, John K was unable to get away with what the fictional executive in The Assistant was, but still remained supported on by his fans until Byrd and Rice spoke up. And while a real life #metoo situation, the fictional version was handled more from the female perspective than the true-to-life story. Maybe that is the way they documentary developed, or maybe the difference between a female and male director perspective.

Not explored is how in 2013 John K raised almost $150,000 on Kickstarter from fans promising a new animation on George Liquor which never emerged.  A hope that fans had (use screenshot) was that the story of John K’s crowdfund in 2013 remains unfulfilled to this day. And perhaps, that is for the best.