(Maska has been making the film festival rounds and next screens in Los Angeles at AFI FEST 2011 on November 8th and 9th. Go here for tickets.)

The Quay Brothers built a reputation in the late ‘80s to early ‘90s with a series of stop-motion shorts in an Eastern-European style, animating cracked Victorian doll heads and mundane household objects like buttons and spoons. They also animated some iconic music videos, most notably “Sledgehammer” by Peter Gabriel, and directed two live-action feature films. At the time there was a lot of discussion about the influence of Czech master animator Jan Svankmajer on their style, but their new short Maska sees them taking their aesthetic to a whole new level, transporting the simple rhythms and textures of their earlier work into a wildly baroque and layered project.

The film is a pretty faithful adaptation of the short story Maska by Polish science fiction author Stanislaw Lem (who wrote Solaris, the novel on which the Tarkovsky film is based)—a stunning work in and of itself—a first-person narrative about an artificially created woman feeling herself coming into being and moving toward a strange and cruel fate.

“The ‘it’ that was ‘I’ grew and came to know itself,” she says, in a half-whispered voice-over, as the stunning production design comes into focus—gorgeously grotesque puppets dressed in renaissance style, in saturated reds, observe her from above. The woman herself has the Quays’ familiar antique doll head, but her breasts look sort of like the onion domes of St. Basel’s Cathedral in Red Square. As she describes the sensation of becoming female (“I, a ‘she’ now, felt the violent rush of gender”), a dental probe inserts a pink, gelatinous substance into her eye-like vagina.

The Quays set the bar high with their choice of musical score: it’s De Natura Sonoris I—the renowned work by avant-garde composer Krzysztof Penderecki, which ranges from long, slow waves of tone that suggest breathing all the way to Bernard Hermann-esque stabs of frantic strings. The editing is also remarkable, with the frequent use of the unusual technique of repeating a few seconds of footage multiple times, to hypnotic effect. 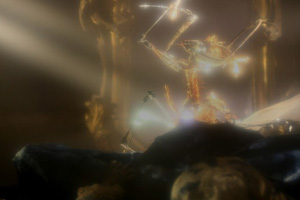 But the most remarkable feature of the piece is its use of light. Unusually for stop motion, the lighting design is constantly shifting, creating visual counterpoints with clusters of light pools swarming around the frame, throwing dramatic shadows, slowly shifting like a liquid, or even rudely streaking in front of a lovely composition. The light in Maska expresses a type of intrusion, a sense of being under observation.

The woman finds that she has been given three different identities, three different sets of memories. She feels compulsively drawn to a man at a courtly ball, but finds out that he is a political dissident and she has been created to murder him, on orders from the king. She undergoes a spectacular transformation from woman to insect—a sort of giant, luminous praying mantis—and ruthlessly chases him through a series of dazzling sets. “I lost a suitor and gained a prey,” she says.

Maska is a dark and tragic and profoundly romantic story, and one of the most painfully beautiful films in recent memory. It represents a quantum leap for the Quays—like the woman shedding her body to become a beast of prey, they emerge from the safe shell of their reputation with a new and powerful artillery, and have created what is arguably the finest work of their career. 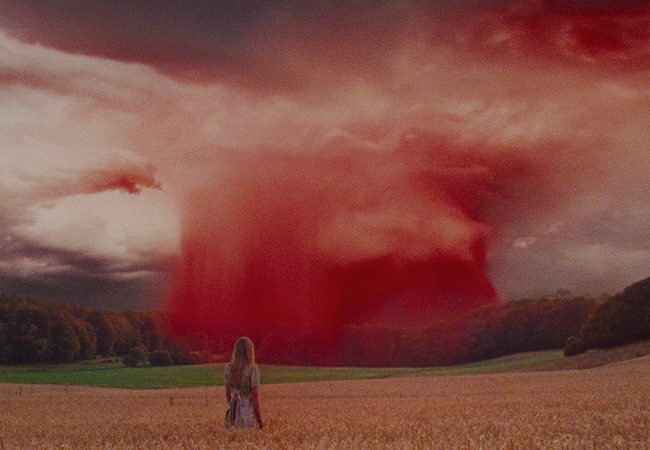 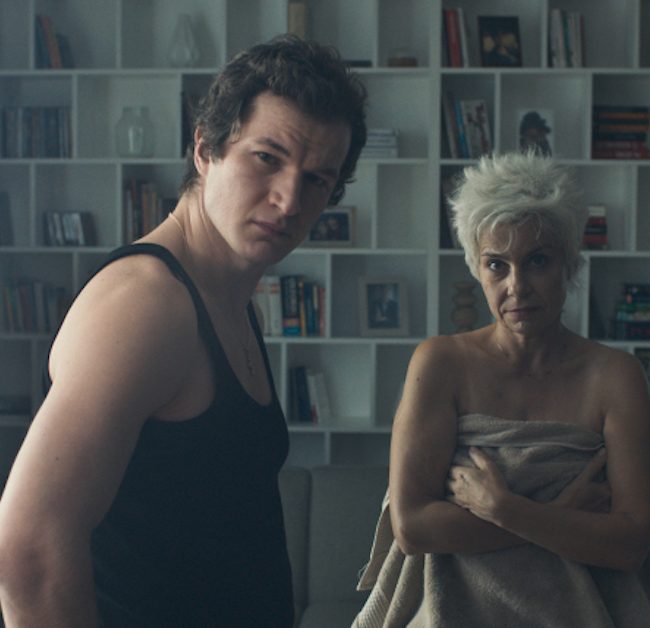