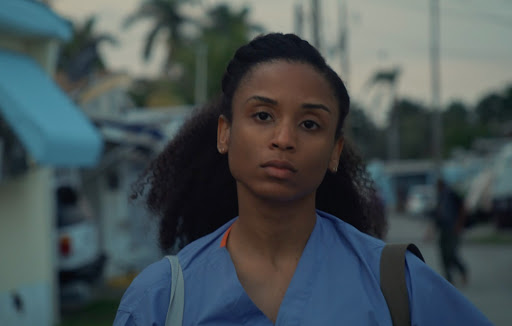 “Once this country puts its hands on you, it never lets you go.” These words spoken by the titular protagonist in Edson Jean’s riveting drama Ludi speak to the somber mood and struggle that pervades the film. Set primarily in the Miami neighborhood of Little Haiti, Jean’s feature directorial debut is an intimate character study of a young Haitian immigrant’s struggle in the wake of the Trump Era. Jean and co-writer Joshua Jean-Baptise’s insightful screenplay is brought to life with a soulful breakout performance by Shein Mompremier that makes us question the notion of the American Dream, and how much it truly takes to achieve it. Ludi puts her personal life on the backburner just to make enough money to survive. The American Dream is often glorified by those who haven’t had to deeply consider the immigrant experience portrayed in the film. By showing how much these people sacrifice, the viewer gains respect for their struggle.

The film opens with Ludi preparing for work while listening to a message recorded on an audio cassette by her cousin Gerline back in Haiti, a unique but cost-effective way of communication for distant family that becomes a motif in the film. She hasn’t seen Gerline or her niece in some time – she can’t – because she barely makes enough to pay rent, let alone take a day off. Despite this lack of physical proximity, the cassette tapes and Ludi’s desire to save up for a graduation dress to send to her niece back in Haiti show her desperation to stay connected with family when apart. Despite an onerous work schedule, she tries seeking extra hours at the nursing home where she works, but is denied because she has already exceeded the overtime allowed. Instead, she is told she needs to take the week off – an unpaid “vacation” of sorts that she does not have the luxury of taking. Seeing her despair, her religious co-worker and friend Marie (Kerline Alce) tries to comfort and instill hope in her through prayer in one of the film’s more subtly humorous moments.

Still desperate for more work, she reluctantly takes up her roommate Blanca’s (Madelin Marchant) offer of a private nursing gig, something she is prohibited from doing outside the hospital she works at, and that puts her at risk of being fired should she be discovered. This leads her to the apartment of George (Alan Myles Heyman), an elderly client she is told has dementia. The cantankerous but sensitive George feels condescended to by Ludi, and constantly claims he doesn’t need a nurse. He rather thinks of her as someone hired by his adult children to help drive him into the grave faster. The abandonment he feels by his children causes him to take his frustrations out on Ludi during the remainder of their miserable evening. George comes from the generation that helped build Miami into what it is today, and his outlook comes into conflict with immigrant Ludi’s sense of purpose in America. She can only take in so much verbal abuse until her patience is tested, and once pushed enough, her emotions get the best of her and she pours out everything she has been holding in.

Despite the need to work long hours that deprives her of a personal life, there is a sense of community that surrounds Ludi and demonstrates the spirit of camaraderie true to the immigrant experience. This is shown through a spirited debate she has with her bus driver – a fellow Haitian – on why he left a dictator-ruled country while embracing Trump’s MAGA politics; a display of her true feelings that she is not permitted in more “American” spaces, where she is forced to silence her beliefs lest she be fired. We are reminded of where Ludi comes from, and are introduced to those from the same and similar backgrounds trying equally hard to make it however they can in modern-day America, an exploit made no easier by the very policies Ludi debates with the bus driver. The film’s editing makes good use of its 80-minute run time by making each moment of Ludi’s day flow smoothly into the next, communicating the frenetic pace of her tireless work life.

Based on director Edson Jean’s own experiences as a Haitian-American growing up in Miami, Ludi shows us a glimpse into the immigrant struggle that is both tender and poignant. Shein Mompremier brings a lot to the table as well, fleshing out the lead character with her multifaceted and moving performance. By the time we reach the film’s ambiguous ending, we are fully drawn into Ludi’s story and rooting for her success, and in absence of such a resolution, are left to ponder how realistic the American Dream may be in the face of our country’s endless social and political obstacles.