from Lorber Films. It opened theatrically at the Film Forum on Wednesday, March 30, 2011. Click on one of the previous links to learn more. NOTE: This review was first published on March 17, 2011, as a “Hammer to Nail Pick of the Week” at the Filmmaker Magazine blog.)

They’re called motion pictures, but in the case of Michelangelo Frammartino’s Le Quattro Volte, that term isn’t quite accurate. Motion painting is more like it. Spiritual yet not overtly religious, playful yet dramatic, patient yet never ponderous, Frammartino’s extraordinary celebration of the cycle of life is as close to church as cinema can get.

The beauty of this masterfully wrought docu-poem is that for all its superficial “art film” trappings, Le Quattro Volte floats along like a pleasurable, gentle breeze. Yes, Frammartino takes an atypical approach to narrative, instead choosing to break his story down into four distinct parts. Yet even if certain viewers aren’t able—or don’t want—to watch the film with intellectual eyes, the footage itself is so compelling on a second-to-second basis that it doesn’t matter.

Frammartino doesn’t begin with life or death. Instead, he opens on that unsteady perch just between the two. An old shepherd herds goats in the remote Italian town of Calabria. Though he is introduced in silence, when he unleashes a troubling cough shortly after, it’s clear that he’s not long for this world. He’s not. Part of the shepherd’s daily routine is stopping by the local church to pick up his own special form of medicine—what one might literally term “angel dust,” as it consists of sweepings from the floor of the church itself. The old man mixes this dust with water and drinks it before going to bed. But one night, he discovers that his angel dust is gone. The next day, he’s gone too. 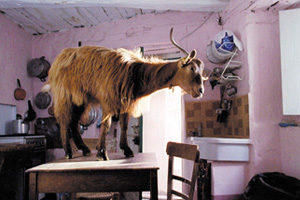 Frammartino shows us the old man’s daily routine by not just having him perform the same daily chores as the day before; he uses the exact same camera framing. Furthermore, he employs long, static takes to make us truly feel the scope of time that constitutes this man’s long life. Yet the blessing here is that Frammartino doesn’t overextend his shots to the point of tedium. As experimental as his filmmaking might be, it’s clear that he isn’t challenging us. He’s immersing us.

The first part (or, according to the film’s literal translation, “time”) climaxes with a shot that immediately joins the all-time canon of truly great one takes, in which an Easter procession, a nagging dog, and a rollaway truck converge, setting the old shepherd’s goats free from their pen just as his spirit is about to be set free from this world. The shot is as comical—Tati sprung to my mind as it unfolded—as it is poignant. It really must be seen to be believed. (A full confession: I admit that my inner filmmaker was distracted wondering just how many times they had to rehearse and/or shoot this shot before they nailed it. Whether it took one take or 20 or 200, the fact remains that it’s a Vatican-approved miracle.)

If the natural choreography within that shot doesn’t win you over—and if it doesn’t, you need to give up on cinema completely—the next chapter will. Just as the door is officially closed on this old man’s life, a baby goat is born with a jarring splat, as he struggles to come to grips with his earthly existence. After he begins to get accustomed to things, he’s allowed to roam with the rest of the pack, though he soon gets separated and is left to fend for himself.

The first time I saw Le Quattro Volte, I was so awed by that stunningly choreographed one-take, and so subsequently smitten with that adorable baby goat, that the remaining two chapters felt like a bit of a letdown (in the first, a gigantic tree is chopped down and used in a ritual celebration; in the second, that same tree is converted into charcoal). But on a second viewing, I was able to sit back and let these parts cast an equally enchanting spell. This time, the film felt just about perfect.

Throughout Frammartino’s moving painting, the sound of wind is not just heard. It is seen. In the gentle swaying of the grass, in the blowing of leaves on the trees. Most unforgettably, it is observed in the drifting of smoke through the air. In the film’s prelude, the smoke that we see is simply that: smoke. But in the last shot, as a new plume of smoke escapes from a chimney, that shape-shifting white cloud becomes something altogether more profound. It’s that old man, it’s that baby goat, it’s that charcoal, it’s everything, forever and ever, amen.