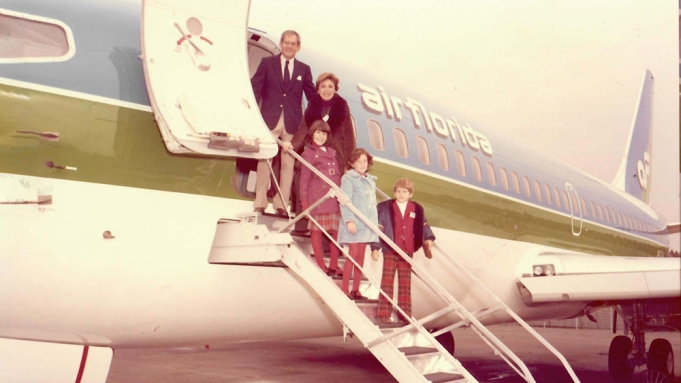 (The 2022 Sundance Film Festival runs January 20-30 all virtually. Check out Melanie Addington’s movie review of Last Flight Home. Like what you see here on Hammer to Nail? Why not pay just $1.00 per month via Patreon to help keep us going?)

What an incredibly special film that we only see a few times in life that forces us to bear witness to the one thing that unites us all: death. Ondi Timoner opens up her personal life by taking us on a journey with her family as her father chooses to end his life in Last Flight Home.

Her father, Eli Timoner, founded Air Florida in the 1970s but a massage error led to a stroke which led to permanent disability. In the 80s they lost everything but the family. After a new health battle, he chooses, since living in California, to medically terminate his life. With the state law, a 15-day waiting period is required, so his family sets out to make plans and make their goodbyes, all while the camera remains on.

Known for her visionary documentaries, and a Grand Jury Prize Sundance winner, for Dig! and We Live In Public, Timoner turns the camera around to face a challenging moment in her family’s life. With new laws, hospice, doctor requirements and COVID, the family navigates the challenge of medically terminating a life and we learn the process as they do. Between clearances and rules on coherency (meaning anyone with Alzheimer’s doesn’t get this choice), the vérité film takes us on a harrowing journey through the medical system.

As a Jewish family, certain traditions are shared with the audience, particularly as his own daughter is the Rabbi for his spiritual preparations and the Taharah ritual of preparing the body after death. The elements are not explained but serve as rituals, just inherently known in their family.

To know this is coming is a luxury, Ondi Timoner generously offered while broadcasting one of the many vacillating emotions that arise as a loved one is dying. From tears to laughter, their family takes us through the gamut. And as the Rabbi Rachel Timoner shares about her fathers loss during her Yom Kippur speech, the true measure of life was love and something he had to reckon with as he talked through his feeling of shame and failure with her at the end during his vidui. While he thought his failure in business made his life a loss, as he learns over the course of the two weeks while saying goodbye to so many, his life, when measured by friends and family, was more than a success.

With as much loss as we have all endured the past two years, a film like this may seem daunting, but its value serves as a reminder to us all that we get one shot at this and may as well recognize what really matters to us while we still can. Watching the process of such an important step also matters. The fact that Timoner let us have a glimpse into their journey is a blessing.

California’s Death with Dignity law has had a few changes and was held up in judicial process from 2018 to 2020. In 2022 they are looking to change the 15 day waiting period to 48 hours. Governor Jerry Brown signed ABX2-15, End of Life Option Act, into law in 2015.

Full disclosure that I have served on a jury with Juki Timoner (Ondi’s son) at Sidewalk Film Festival.