(Land and Shade, winner of the Caméra d’Or (award for best first feature) at the 2015 Cannes Film Festival opens this Friday June 17th at the Village East Cinema)

On a long dirt road, seen from far away, strides a lone figure, simply attired, carrying a suitcase. Neither young nor old, he seems, most of all, determined (and maybe a little resigned). He slowly walks towards the camera, which holds, unbroken, during this long-duration take. From behind, a truck approaches, spewing clouds of dust that threaten to overwhelm the man. At the last minute, he steps aside into the bordering field of high-grown vegetation, allowing the truck to pass while he takes refuge from the now-foul air. It’s a long truck, seeming to never end as it drives by, trailer after trailer linked in succession. Eventually, however, the road clears, and the man can move on, still determined (if perhaps a little more resigned).

This is the first scene of Land and Shade, winner of the Caméra d’Or (award for best first feature) at the 2015 Cannes Film Festival. It’s a brilliant visualization of the central conflict of the film, setting the tone for all that is to come. The man is Alfonso, returning to the home he once shared with his wife and son, 12 years after running away (for reasons later to be explained). His son, Gerardo, lies sick in bed, his lungs polluted by the omnipresent ash and dust from the sugar cane that the local farming conglomerate burns every night. Gerardo has a wife, Esperanza, and a 6-year-old son, Manuel; he used to be the main breadwinner, working in the cane fields, but now Esperenza and the matriarch of the clan, Alicia, have to go in his stead. That’s why Alfonso has come, to tend house while the women work. He hasn’t been back since he fled, and the first words we hear in the film are spoken by Manuel, who opens the door to Alfonso after that first scene, asking, “Are you my grandfather?” And so begins a process of painful reconciliation. 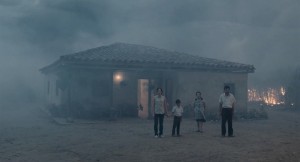 Land and Shade is many things: a film about families, unhappy in their own way; a film about the exploitation of labor; a film about environmental devastation; all of them simple, when taken singly, yet vibrantly complex, when combined. First-time Colombian director Augusto Acevedo takes his time – an aesthetic underlined through his choice to hold on many of his shots far longer than is comfortable (he’s not out to soothe us) – and provides no easy solutions to the family’s dilemma. This is the only land they know. Should they leave? Gerardo might die, it seems, if they stay. And Gerardo won’t go unless his mother does. But this is her land, and stay she must.

Back and forth they go, to the fields and to the hospital, while every night the fields burn around them. At one point, towards the end, the family stands, in front of the house, surrounded by fire; it’s as perfect a tableau of hell as anything I’ve seen. Little people trapped by the machinations of forces beyond their control, they take what comfort they can from the moments of quiet when the flames die down, in the pleasant shadow of the magnificent tree in the backyard, a haven for birds and a place where Alfonso can sit with Gerardo and Manuel, reconnecting with the son he abandoned and the grandson he never knew. A brief idyll, before the inferno returns. Of such small joys, on land and in shade, are life made.