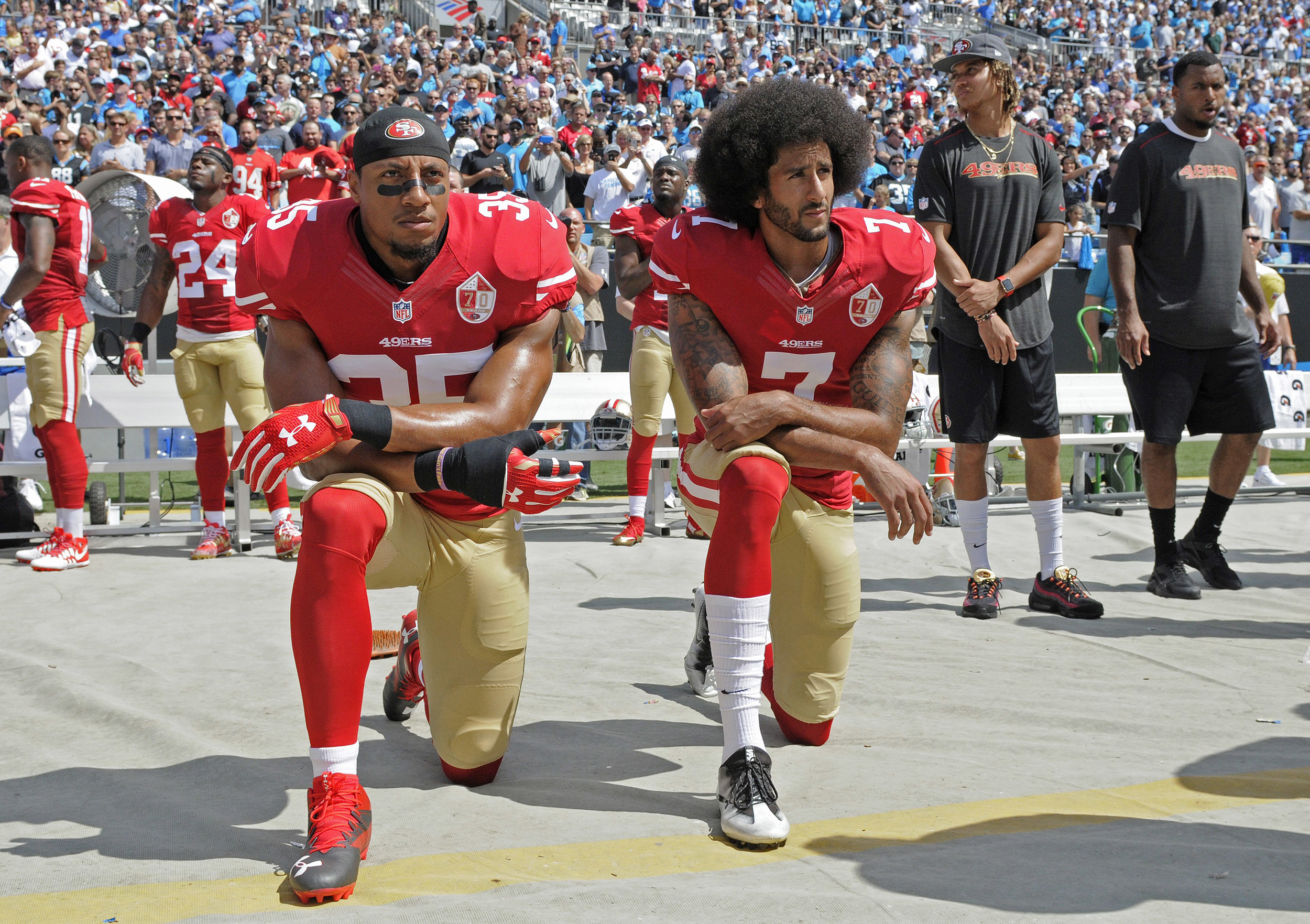 (The 2022 Tribeca Film Festival runs June 9-26 both online and in-person. Check out Chris Reed’s movie review for Subject. Seen it? Join the conversation with HtN on our Letterboxd Page.)

I am not the target audience for a film about a football star. But Kaepernick & America is not that. What it is mostly is a recap of what happened when he took a knee, life before it, life after it and how that melds into the American experience.

Set up in a traditional documentary style, we first learn about Colin Kaepernick’s adoption, upbringing in Turlock, California and high school football days. Even then, people knew he was special. Even then, he was surrounded by mostly White people and is biracial. Directed by Tommy Walker and Ross Hockrow, the film encapsulated why, even for people who don’t pay attention to football, they should know his legacy.

We get to 2016 in the early days of Trumpism, the videos emerging of countless Black lives lost to police brutality, the “fake news” phenomenon, Russia and all the early days of what we are living now. And Kaepernick, first sat at a game in August before he kneeled. Ignoring the American anthem at a game, some people noticed, including a military veteran, Nate Boyer, who wrote to him. They met, they discussed why and he encouraged them to find a better way. On September 1, he kneeled.

Understanding the media and symbolism of a protest, at the military appreciation day at Qualcomm Stadium in San Diego, Kaepernick kneeled. A lot of football fans lost it and took to the Internet to complain. Fox News fueled the fire. So Kaepernick kneeled again and others joined. And he responded to the criticism immediately after the game by donating over $1 million to non profits to help with police brutality and racism in America. He tried to speak for himself, softly, plainly and with clarity. But the anger was out of control.

By end of 2016 season, Kaepernick was a free agent and has yet to be picked up again. With great personal risk, he kept his commitment. While many know him as a football star, the documentary attempts to rebrand him in the longer lens of history as a civil rights activist. And perhaps, with recent practices with the Raiders, he can one day be both.

Don Lemon and other spokespeople spoke on the impact of Kaepernick and the reason behind such outrage lending to the power of white supremacy and the anger of a “minority” making a real choice to stand against him. Blackballing has always been the approach to quiet criticism and has often been the success of white supremacy. But the documentary looks at the state of where we are now, six years later and the current generation rebuking these old tricks. By 2020, reality in America shifted and the power dynamic with it.

As said in the film, “White supremacy fashions its truth…[and the] present is pushing on the power of the past and saying no more.”

While the three act structure of the documentary and typical b-roll and talking head interviews are not groundbreaking, the truth is the film subject matter is worth not distracting with risky edits or cinematography. The tried and true somehow works for this counter-culture remains fighting argument. Perhaps ending a bit glossy by closing on the NFL audition in 2019 with only a small recap of 2020-present, the film hits its thesis in a solid way.

The film has played Seattle international Film Festival and Tribeca with no plans yet for distribution.