Ti West’s western, In a Valley of Violence, seemed more like a valley of paternally protected wannabe ruffians until they decided to provoke Paul, an Army deserter making his way for the border of Mexico, played note perfect by a smoldering Ethan Hawke. While the dialogue was downright incredible, folding modern idioms into gunslinger lingo ala Milch’s Shakespearean infused Deadwood, the story rang hollow and ultimately left me flat at the end.

Hawke’s Paul heads for the barren town of Denton to conserve time as well as hydrate both him and his confessor dog, Abbie, as they flee his haunted history of abandonment. A charlatan priest greets him on the trail with an expository and ominous warning of the danger that lurks ahead in the valley. It’s here that we witness Paul’s mercy and aversion for killing, but also the first of many blaringly convenient plot choices when he tosses the priest’s gun in the desert, only confiscating his bullets.

Once in town, Paul quickly finds himself challenged by the town bully, Gilly (James Ransome’s character who suffers from distractingly excessive monologues). Paul does not take the bait for a fight until Gilly threatens to hurt a barking Abbie, which secures him a broken nose courtesy of Paul’s single punch. Paul settles into the town hotel run by Gilly’s opportunistic girlfriend, Ellen (Karen Gillan) and her 16 year-old jilted sister, Mary-Anne, who sees in Paul a good man who can be her ticket out of the valley. 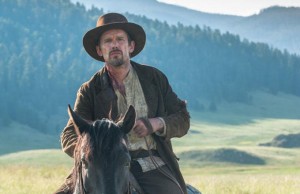 No sooner has Paul bathed and dressed than the appearance of Denton’s only truly violent man: John Travolta’s expertly inhabited town marshal. Travolta not only happens to be the law, but he is the embarrassed father of Gilly who cannot allow Paul’s punch to go without consequence. After a revealingly empathetic exchange with a contrite Paul, the Marshal banishes him from Denton.

Gilly can’t leave well enough alone and, along with his gang, tracks Paul down on the trail outside of town to teach him a lesson by killing his dog. Mind you, Abbie isn’t just a normal dog, it’s Paul’s only companion and the only breathing being he communicates with. In fact, he promised the dog he wouldn’t kill any longer. That promise is quickly broken.

I enjoyed the score, which echoed western classics, but at times it was so overpowering during poignant scenes, it made me realize I was watching a movie. The film is peppered with absolutely hysterical moments and the performances were all on point, but the story could have afforded a bit more muscle.