(Horsefingers 3: Starfucker is screening at the Slamdance Film Festival on Monday, January 19th at 8:30pm, and Thursday, January 22nd at 12:30pm. Visit the film’s official website to learn more.)

Kirsten Kearse has displayed a remarkably singular focus in her short films, the third of which—Horsefingers 3: Starfucker—will play at this year’s Slamdance Film Festival. As its title indicates, Horsefingers 3: Starfucker is the third installment in the Horsefingers trilogy, a darkly whimsical and surprisingly diverse group of narratives about a woman named Emma who has hooves. For fun? For real? It’s never quite clear, but this refusal to answer some of the most basic questions of nature is surely a part of the trilogy’s charm.

The original Horsefingers, shot in 2002 on black-and-white Super 16mm, stars Daniel London (of Old Joy fame) as Theodore Horsefingers, a working stiff who dons a pair of the titular mitts. The film opens as his office, a veritable Noah’s Arc of white-collar animals, is hurriedly evacuated. A big-brother voice drones “the animal crackers are out of the box. The animal crackers are out of the box.” The creatures take to the woods, where they must fight for survival and maintain their autonomy in a struggle reminiscent of high school English classic The Most Dangerous Game. As Theodore hides from the powers that be, he searches for Emma, a pretty officemate with a porcupine’s back who uses her facile human hands to sew his torn coat for him.

Horsefingers 2, a looping video work that chronicles a day-in-the-life of a female Horsefingers, currently remains unfinished. But a trailer for the project indicates that it will be less plot heavy than its companions, instead focusing on the minutiae of life as a hooved person. And this hooved person is Emma, whose back is no longer decorated with quills. Now she has assumed the burden of Theodore’s equine hands.

But what exactly is a Horsefingers? A person heavy into furry fandom? Or a piece of modern mythology invented by Kirsten Kearse? The writer/director’s treatment of her subject doesn’t imply delayed development, sexual deviance, or comedic distance. Rather, The Horsefingers appears to be an isolated urban anomaly, the MySpace generation’s answer to the Pegasus. 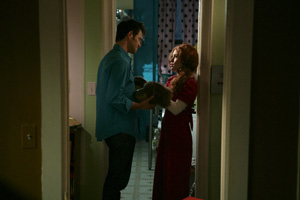 Horsefingers 3: Starfucker is the most accessible installment in the trilogy. Shot on glorious color Super 16mm, it boasts an ultra-catchy synth soundtrack and a candy-bright palate that welcomes some high-camp to the proceedings. Such a treatment befits this Horsefingers, which finally acknowledges the vulgarity and vague embarrassment of seeing a human decked out in animal gear. Starfucker centers again on Emma, this time embodied by Maria Thayer. The film opens on the image of Emma, now a Horsefingers, as she waits sadly in a bar for someone who will never come. She rests her face in her hooves. Suddenly she spots an actor she worked with many years ago on an ill-fated film project—she’s a script supervisor, which is, coincidentally, how Kearse makes her living. (But the reader will be comforted to know that an in-person meeting with the director revealed no animal accoutrement, just a friendly demeanor and a striped sweater.) Emma approaches Lem (Adam Rothenberg), a cocky Matthew McConaughey type who smirks as she recounts their shared history. He eyes her hooves with a mix of lust and disdain, then asks whether she might like to get dinner. He is vaguely menacing, a little mean, but what follows is one of the most disconcerting predator-becomes-prey change-ups since Polanski’s Bitter Moon. The sweet, eager-to-please Emma discovers domineering Lem’s secret and, suffice it to say, his reasons for wanting an anthropomorphic conquest become all too clear.

The appeal of the Horsefingers films lies in their specificity: Kearse has created a slightly skewed universe with strict rules of engagement and visual tropes that link disparate scenarios. But the Horsefingers have broader implications. When viewed as a trio these slim dramedies are suddenly a searing indictment of the professional rat race, sheep-like belief in authority, and any other animal analogy for corporate uniformity that you care to employ. Like the magic pelt that hides Catherine Deneuve from her lecherous father in Jaques Demi’s Donkey Skin, a Horsefinger’s hooves are a symbol of defiance, an anarchic battle cry, existing in the gray area between point of pride and mark of shame.