(Return to Sleepaway Camp was released on DVD by Magnet Films on November 4th. You can buy it, as well as Sleepaway Camp, at Amazon, here

Anyone who saw Robert Hiltzik’s original Sleepaway Camp back in the mid-1980s will never forget it. Particularly if you were ten years old and watching it at your own tenth birthday party in a roomful of baffled boys and girls and joined at the very end by your mother who had walked in just in time to catch the film’s eyelid-splitting final shot. In hindsight, I’m sure her heart must have been thumping as she realized what she had just allowed a roomful of children see (that’s my fault, I was a persuasive, spoiled brat). At the time, however, I was too busy trying to come to terms with the complete and utter bizarreness that had just unfolded on screen.

The best part about Sleepaway Camp is that watching it again, twenty years later, it emerges as a truly subversive contribution to the slasher movie genre, making it more Poison than Friday the 13th. Homoeroticism, transgenderism, creatively over-the-top murders, there are things going on here that were perhaps even out of Hiltzik’s control (although, to his credit, it’s clear he was in control of a lot). But those unintentional, happy accidents are what makes it so indelible. Take the police officer with black electrical tape for a moustache. Ordinarily, this gaffe would expose the film’s low budget and render it shameful; yet, in the context of Hiltzik’s film, it felt just right. So wrong it was right. Just like the performances, which were somehow so off they were on. And yet the murders themselves were professionally executed. Added together, the film couldn’t be dismissed as mere camp. It was something else entirely. It was, ultimately, the vision of one demented man: Robert Hiltzik.

Then came two sequels in which Hiltzik was nowhere to be found. It showed. They were different, lesser creations entirely. But finally, after nearly twenty-five years, Hiltzik has re-emerged with an official sequel to his original cult classic. While Return to Sleepaway Camp doesn’t pack the subversive shock-and-punch of that first film, it still feels like a work that couldn’t have been made by anyone else. In this way, it separates itself from the assembly line of torture horror schlock that has bludgeoned multiplexes to death over the past several years. 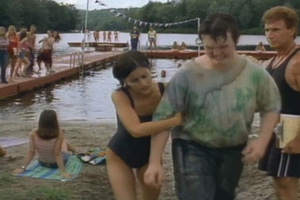 Back then it was Camp Arawak. Now, it’s Camp Manabe. I actually checked to see if “manabe” was the Indian term for obnoxious, because that is what this camp is. Lighting farts, insults, shouting, and that’s only in the first three minutes. It only gets worse from there. It’s as if Camp Manabe is where the most annoying, abrasive, amoral, and unruly kids from all over the state are sent for a summer of unsupervised rehabilitation. The only alliances that are formed are done so to more easily enable everyone to pick on, booby-trap, and mock the nearest outcast in the room. More often than not, that outcast is Alan (newcomer Michael Gibney), an overgrown, frog-loving man-child who tries to give it but more often than not takes it, to the delight of everyone around him. But as Alan’s anger rises and becomes pointed at specific targets, those targets begin dying outlandishly ugly deaths. Camp owner Frank (Vincent Pastore) doesn’t want to listen to his right-hand man Ronnie (Paul DeAngelo), who is convinced that Angela has returned for another round of slaughters. For those of you who haven’t seen the original, Angela is… how shall we say this… a carry-over from the Camp Arawak days? We’ll leave it at that in case you get frisky and add the original film to your Netflix queue (which you should).

Here is where I can go no further before addressing the… performance?… of DeAngelo. He was a standout in the first film for his wooden, Scooby-Doo-esque performance, and I am thrilled and relieved to say that two decades have not tarnished DeAngelo’s incredible un-delivery. Watching the “making of” documentary on the DVD, one begins to wonder if he’s even a human being at all. There are actors who never deliver the same line twice, or at least in the same way. DeAngelo delivers the same line every single time in the exact same way. It never fails to elicit laughter, especially when he tries to become extremely emotive. Yet in a freakish blessing from the movie gods, this man’s ability to express himself feels as tautly constricted as the muscles in his overly bench-pressed arms. Toss in an upstate New York (or is that Jersey?) accent, and dinner is served! While I could write a book on the character of Ronnie—and very well might at some point in the future—I better move on.

The structure of Return to Sleepaway Camp, especially the deaths, mirrors that of the first film, which has a more traditional narrative and pay-off (albeit a legendarily unexpected one). This time around, the pacing and execution are a little bit stranger. It’s a much more assaultive presentation. The pattern goes like this: an extended sequence of taunting, arguing, and fighting between campers, followed by an extended sequence of a character getting killed. Hiltzik is clearly relishing the set-up of these deaths, dragging them out to a comical extent. At some point, we sense that it might never happen. And then, of course, it does. 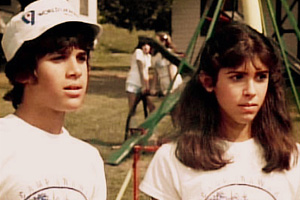 This is why Return to Sleepaway Camp perhaps doesn’t measure up to Sleepaway Camp in the most important ways. The original film begins before camp, setting up the film’s shocking twist. This one doesn’t do that. We are simply dropped into an obnoxious camp in which there is a constant barrage of cursing, shouting, hitting, and tormenting. In this manner, it becomes a nearly unbearable satire of kids gone wild, but it doesn’t get deeper than that. Later, Hiltzik works to bring the original film’s lead character, Ricky (Jonathan Tiersten), back into the story, yet that too feels like he’s doing it just to do it. But as soon as Ricky opens his mouth, that doesn’t really matter. It’s just good to see Ricky again.

In one way Hiltzik certainly succeeds. He shows us what it’s like to be the kid who can’t take one step without getting laughed at, kicked in the back, thrown in the lake, or spat upon. But even taking that into account, Return to Sleepaway Camp remains a more superficial, on-the-surface type of experience. What made Sleepaway Camp such a twisted delight was that unspoken, underlying hint of a darker secret that, once revealed, was never forgotten. I know I haven’t. 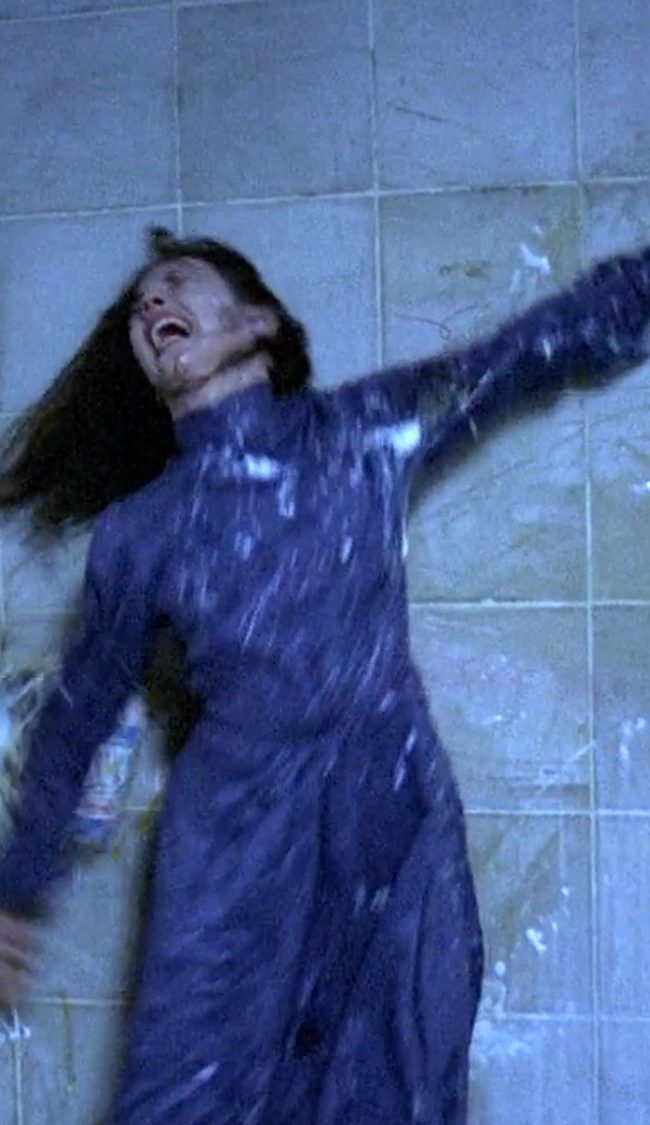