The zombie sub-genre is hungry for original content and needs fresh meat. Lately we’ve been treated with an adequate chunk of that: the ultra cool low-fi movie Wyrmwood: Road and yes, Zombeavers. There is The Walking Dead which is a deservingly enormous hit, but we’re talking cinema here and the last exceptional zombie movie you could watch at the multiplex was Jonathan Levine’s excellent Warm Bodies (based on Isaac Marion’s unique novel of the same name), a movie about zombies with love, humor, and a big beating heart. It should have been a box office hit. It wasn’t because average moviegoers want sparkling vampires, gratuitous zombie violence, guns, and explosions. (And now, superheroes are added to that mix.)

Maggie, starring Arnold Schwarzenegger (in his second horror film) and Abigail Breslin (in her second zombie film), fits in the same category as Warm Bodies which is equally tragic and delicious. It’s a wicked cool film but it’s not going to be seen by many people and that’s a real tragedy. Maggie is a unique take on zombie-lore and it’s pleasantly surprising.

As you can tell from the trailer or poster, something is wrong with Maggie (Breslin). No spoiler here: she’s slowly turning into a zombie. In Maggie, the world is now hell on Earth and there’s been a zombie outbreak. As Wade (Schwarzenegger) looks around his small town neighborhood, there’s only a few people or zombies in sight — it’s just endless empty fields. Instead of using big action scenes and zombie chases, Maggie focuses on what a human goes through while they are slowing changing into something they’ll never recover from and how the people around them deal with it. 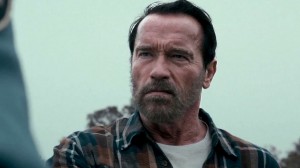 Before they go to the dark side, they carry on as normal with their families and social life until it’s no longer possible and when it’s time (hours before they fully turn), the infected are taken to a quarantined hospital where they are given some kind of pill that numbs their worries. Not a lot is explained about this pill but it is alluded to that it puts them to sleep like an old, dying pet. But Wade is not having that nonsense. He’s going to hang on to Maggie as long as he can in the hope there’s finally a cure, and if the cops come to get her to take her to quarantine, he makes it clear to them that he’ll go T-1000 on them and leave no man standing. Wade’s hollow, angry eyes make sure the police believe he means what he says when he tells them to never come back.

Maggie was written by John Scott 3 (not sure what 2 or 1 are up to) and directed by Henry Hobson. This is their first feature and they make a great team. They admirably show how agonizing it is just waiting for your loved one to change but keeping the faith that a miracle will happen. Most zombie movies are all about the kills and some hunt for a cure, but there’s never a focus on the infected and how scary it is that soon they are going to die. The duo also add in a cool way of explaining why zombies eat humans. The undead lose their appetite for normal food and the smell of skin begins to smell like everyday food – chips, pizza, cupcakes, whatever humans put in their stomach considered food. Once a zombie, their normal appetite is gone and they can only smell skin, which gives them the munchies for meat 24/7. And in Maggie, once that smell starts to become prominent, it’s time for them to head to quarantine.

The real joy and surprise of Maggie is the outstanding performance from Arnold Schwarzenegger. Terminator 2 will always be his best film and most memorable role, but as far as acting goes, Maggie features the finest performance of his career. He is given room to show he has some range and literally pulls no punches as a father doing everything he can to give his dying daughter a good life for the little time she has left. Maggie allows him to perform and gives him feelings instead of machine guns, one-liners, and a high body count. Just like Jean-Claude Van Damme did in the spellbinding JCVD, Schwarzenegger’s colossal performance in Maggie proves that when a role demands for him to act believably, he can crush it.

From the beginning of the film you somewhat know the outcome of Maggie, but the focus of the movie is love and how far a parent will go to make their child dying of a rare and awful disease feel normal. It’s beautifully rendered.