(After premiering at the 2016 Sundance Film Festival Will Allen’s documentary film Holy Hell is out now in new York and L.A.)

Who is more insane, the self-proclaimed prophet or those who follow him? Once enough people believe, it is no longer madness, but faith. Any religion, before becoming mainstream through the sheer numbers of its adherents, seems cult-like to those who reject its tenets. The late Gore Vidal, in his great 1964 historical novel Julian, even dared to remind us that Christianity, at one point in its slow rise to prominence, was the outlier cult of its day, frightening and repulsing those who followed the ways of the old gods. Laugh now, then, at those whose beliefs differ from yours, but know that tomorrow you could be the one left out in the cold.

Holy Hell, a new documentary from Will Allen, tells the story of one such cult that didn’t make it: the Buddhafield. For 22 years, starting in 1985, Allen followed the teachings of a mystical leader named Michel – later, Andreas – who led his disciples in, at first, seemingly innocuous rituals of spiritual and physical cleansing. Those who found their way to the Buddhafield – including Allen’s two sisters – were lost in some way, looking for someone to give meaning to their lives. Allen had gone to film school, and so became the group’s de facto cinematographer, filming various activities over the years, and the story of Holy Hell is compiled from this treasure trove of footage, as well as from talking-head interviews from the group’s former members. 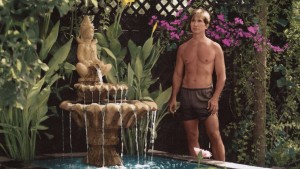 Because, with a title like Holy Hell, we know that paradise cannot last forever. Starting in the early 1990s, when the Cult Awareness Network became aware of the group, an increasingly paranoid and authoritarian Michel relocated from California to Texas, forcing his followers to join him. Soon, what had been a happy group of pseudo-hippies searching for enlightenment became a band of hero-worshippers devoted to one cause: the comfort and pleasures of their leader. As Allen and his friends testify, the idyll quickly became a nightmare.

At first, I must admit, I was deeply repelled by the film. Not only am I not in the least attracted to worship of any kind, but I also found Michel’s appeal completely inexplicable. Oiled and muscular, dressed often in nothing but a Speedo, Michel is spoken of reverently as someone with such overpowering charisma that lost souls feel sudden, spontaneous joy in his presence. I don’t see it, and actually find Michel fairly nauseating to behold. But no matter. The film is an excellent document, from the inside, about the machinations of a cult leader and the thinking of cult followers. How could so many people allow one man to so effectively dominate and ruin their lives for so long? Holy Hell may not provide all the answers, but at least it asks the question, trumpeting a clarion-call warning against cults past, present and future.