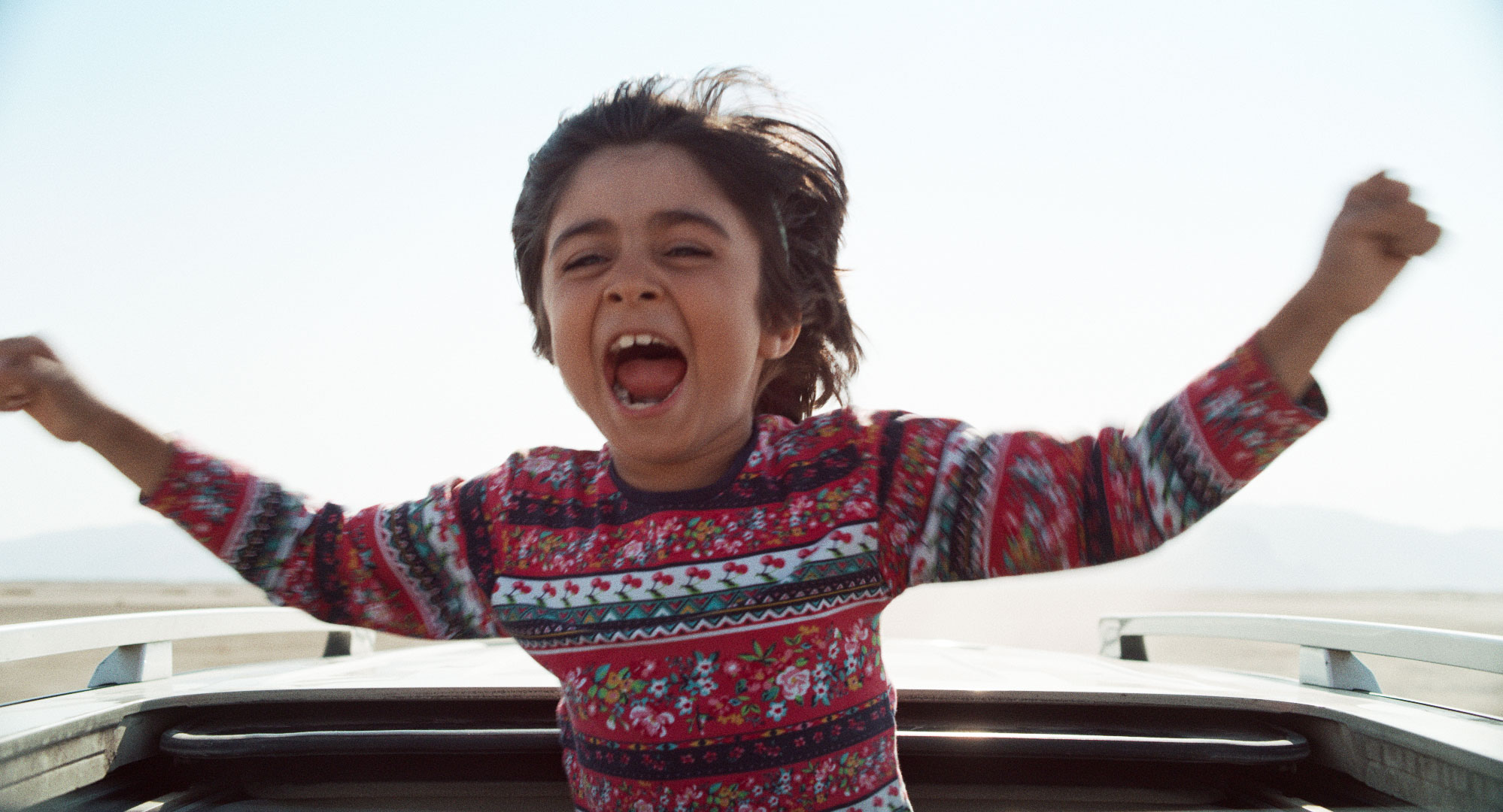 (Check out this movie review of Panah Panahi’s debut feature Hit The Road, in select theaters now via Kino Lorber. Seen it?Join the conversation with HtN on our Letterboxd Page.)

It would be difficult to discuss Panah Panahi’s debut feature Hit The Road without mentioning his father, prolific Iranian filmmaker Jafar Panahi, who looms large in the background. It’s not just that Panah shares his dad’s sense of humor, or that he’s adept at shooting in and around a moving car (see Taxi (2015)), but moreover the dynamic of the family of four seems so real that it could only be pulled from life experience. It’s anyone’s guess if Panah sees himself in the younger brother (Rayan Sarlak) or the older brother (Amin Simiar) or both, but it’s clear that the father (played by Hasan Majuni) is inspired by his father Jafar, who audiences have gotten to know as the subject of many of his own films. However, Panah has a style of writing and directing that is all his own, and Hit The Road may in fact be my favorite Panahi movie of the four I’ve seen. It is a beautifully bizarre journey full of humor, sorrow and even magic.

The film’s title belies the fact that the crux of the story is a somber affair, complete with somber music on the soundtrack. And yet it is buoyed by the humor of a young boy, unaware but inquisitive about the sticky situation the family is trying to get out of. We come into the story from the boy’s perspective. There must be a term for this literary device, the inverse of ‘dramatic irony’, in which the characters know more than the audience. Clues are dropped: “we’re being followed,” the mother (Pantea Panahiha) pants in a state of paranoia. “What is bro up to?” asks the little boy. They tell him that he’s getting married, or maybe meeting with Batman. They can’t seem to get their story straight. They refer to the family roadtrip as his ‘last gasp’ but the little boy sees through that, responding, “when they say ‘last gasp’ something bad happens.” The older brother sheds a tear while driving, as his kid brother talks about him lovingly in the backseat. It may not be clear exactly what the older boy did, but as people keep asking them, “You have a traveler?” it becomes clear he’s trying to get out of dodge.

Panahi has a knack for natural dialogue, and the repartee between the characters is often simultaneously hilarious and touching. The Iranian countryside is full of magnificent scenery, which cinematographer Amin Jafari captures in stunning wide shots. Amin also shot 3 Faces, which Panah was an editor on. One scene they get particularly lucky with cooperating fog that moves in and out at just the right moment. Another wide shot of a hillside at dawn dotted by campfires and motorcycles with headlights is jaw-dropping, especially on the big screen. When they finally say farewell to the older boy, the entire scene is shot from one extreme long shot, which felt like a bold choice, even if it dragged on a little too long. Most great films have a touch of the surreal, and one of Panah Panahi’s bravura shots features the little boy lying on his dad in the grass, as it slowly morphs into a starry night sky, and the camera pulls backwards into nothingness.

As if the familial banter and gorgeous cinematography weren’t enough to win you over, a fifth furry family member is a cute little dog. At one point the father tries to ditch him, but the chair he ties him to is a bit too flimsy. We see the red chair being dragged in the background of a shot, which illustrates Panahi’s flair for visual sight gags. In another humorous scene, the car bumps into a cyclist on a race. He asks them to take him to the hospital, but instead he just uses the free ride to get ahead. References to Lance Armstrong in the dialogue are not so subtle.

Hit The Road is so funny and tragic you may have to slap yourself in the face to keep from crying. The discordant tones seem to blend seamlessly, and we’re left with a feeling of having witnessed a small marvel. The juxtaposition of cultural traditions versus modern technology adds flavor to a relatively simple plot. The father-son moments act as a window into Panah’s relationship with his dad, who surely can take credit for teaching him all he knows about filmmaking. Panah may owe his prodigious talents to his father, but he is also blazing his own path, and it’s exciting to see where he’ll go next.