(H. played in the Next Section at the 2015 Sundance Film Festival and is a selection of the Berlin Film Festival‘s Forum section. Visit the film’s official website to learn more.)

So very few American filmmakers engage creatively with the medium’s full potential. Most are consumed by realistic renderings of experience through plot and dialogue. Drama that encourages audiences to break their sympathetic ties to the hero are considered “experimental” or, in market terms, “uncommercial.” American film schools promote this ancient Elizabethan dramatic perspective because it’s the easiest formula to teach and it’s the easiest way to hook the audience. The assumption that what was good for theatergoers back in the 1500s is also good for film audiences today is utterly preposterous. In reality, we as viewers can engage with the character’s experience in many ways other than just identifying with them as stand-ins for our own interests. The tapestry of cinematic experience can be so much grander and interesting once the filmmaker breaks with this empathy anchor. It’s an experience that asks more from the viewer, but its rewards can be utterly unique and unlike the experience of drama in any other medium. Luckily at this year’s Sundance, we had the bold writer/director duo of Rania Attieh and Daniel Garcia to lead us into their strange world unmoored from antique dramatic conventions.

Through four chapters, H. alternates between two different couples who have the same passion for children yet who don’t actually interact with each other. One older woman, played by Robin Bartlett, is a creator of “reborn dolls,” which look and feel completely like real infants. The dolls are treated like real babies by their older mothers and the whole charade has an air of functional insanity that is so bizarre until you realize, this is an actual activity. The doll that is in the film is an actual doll that cost the filmmakers close to three thousand dollars.

The other couple, played by Rebecca Dayan and Will Janowitz, are younger artists who are about to have their first child but are obviously pretty scared about what it will do to their lifestyle. At one point, when they go to get a sonogram checkup it seems that there is no actual baby and that despite having physical symptoms of pregnancy, like cramps, sensations of belly kicking and lactating, it’s been in effect an imaginary pregnancy. So we have one older woman imagining her fake baby is real, and we have a younger woman whose real pregnant symptoms turn out to be fake. 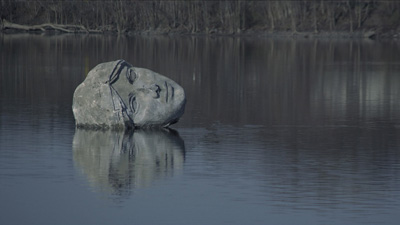 Though the two couples don’t ever cross paths, they live in the same town and they both are experiencing the same odd phenomenon. A screw falls upward while the older husband is fixing a refrigerator and a sudden piercing silent noise will cause certain people to fall to their knees in pain. Strange cloud formations and sudden appearances of a black leering horse in the middle of town are all occurrences that add to this disruptive situation. Once disappeared people turn up dead or in a coma lying in a field, and when we watch a giant stone sculpture head floating down the river we’ve got to ask, is this the end of the world as we know it?

The way in which this world is rendered is extremely compelling because we haven’t see the world end in this way before. When Hollywood represents the end of the world they usually do it through fire and some sort of destructive explosion. In H., it’s the upturning of basic natural laws that indicates something is terribly wrong. We experience these events in a complicated manner; we feel remorse and fear but also curiosity. There is not the familiar sense of simple impending doom; it’s like the world is changing and there are odd forces at work, but still there seems to be this will for humans to continue on. It’s all quite disconcerting and ultimately not explainable in words. This is in part because the world within this film is presented in the present tense. There is no omniscient narrator or perspective to take us out of the experience to explain what is going on. The news broadcasts offer no answers and we understand little of why this is happening; thus, we experience this unsettling series of events alongside the characters.

The special effects, like the cloud formations and the floating screw and the appearance of a Minotaur, are all executed with utter technical realism. All of these other worldly events seem quite believable, which considering that this is a low-budget film is actually quite amazing. Like Advantageous, it’s great to see personal cinema embrace non-realistic stories and utilize special effects to illustrate their own perspective on the future or the apocalypse.

H. moves according to its own rhythm and logic as we follow these couples encountering the unknown. If the natural logic of the world were to suddenly disintegrate, how would you react? H. does not provide any easy answers, but the way in which the question is asked is utterly cinematic.