(Gerhard Richter Painting is being distributed by Kino Lorber. It opens theatrically at Film Forum on Wednesday, March 14, 2012. Visit the film’s official website to learn more.)

Don’t be misled by the seemingly straightforward title of Gerhard Richter Painting. It’s true that German filmmaker Corinna Belz’s documentary does have many scenes of contemporary artist Gerhard Richter at work in his studio, but never has watching paint dry been so interesting. Richter, hardly the media darling, isn’t keen on interviews, a hesitation (or philosophical objection?) that dictates the terms of the film. Belz is only allowed to fetishize his paintings. This is a cult of craft, not personality.

Gerhard Richter Painting reminds me of Wim Wenders’ Pina, another recent documentary about an enigmatic German artist that veered sharply away from genre conventions, reveling instead in motion and feeling. After a recent screening at the Film Society of Lincoln Center, Wenders said the film was supposed to be about dancer and choreographer Pina Bausch’s eyes: what and how she sees, her practically non-verbal teaching methods and koan-like critiques. He had planned to follow Pina and her company on a world tour, but she died unexpectedly before the film could be made, and it was up to Wenders to reimagine the piece around her restrictions (no biography, no interviews). Belz also faced a deep opposition from her subject; as archival footage of early interviews from the 1960s proves, Richter has always been reticent and deliberate in talking about his work. It makes sense that for artists who communicate through movement, or color, pinning what they do to words seems forced and unsatisfying. Talking about their lives perhaps seems equally irrelevant. Language becomes a barrier or a trap, precisely what their chosen mediums frees them from. Some documentaries draw their power from invading the intimacy of their subjects, and exploitation has its place. But as Belz and Wenders’ films so elegantly show, when it comes to artists, focusing on process and action rather than biography can open up documentaries in very vivid, visual ways. Belz’s story is not how Gerhard Richter became who he is, but how his paintings become what they are. We learn very little about his fame, or his family, but we do learn about his inner life. Even Richter acknowledges that “painting is a secretive business,” and by showing his process the film reveals him to us. 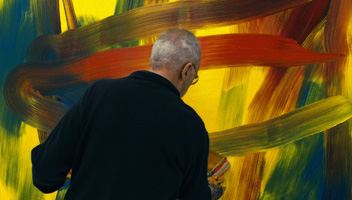 Corinna Belz met Gerhard Richter a few years back when he was creating a stained glass window for the cathedral in Cologne (his home since the early 1980s). The cathedral dates back to the 1200s, survived World War II bombings with reparable damage, and is now one of Germany’s famous landmarks. Richter’s design for the window reveals his abstract leanings; his grid of brightly colored glass “pixels” is striking next to the cathedral’s craggy mass of somber, magnificent gray spires. Though he hadn’t been on film in over 15 years, the camera-shy artist agreed to allow Belz to document this process. This project inspired Belz to pursue the idea of a feature documentary on Richter and his painting, which was subsequently filmed over several months in 2009.

If you’re looking for a decidedly more American dissection of art, for abstract and addled Warholian flash, then this isn’t the film for you. There’s no sex, drugs, rock’n’roll, or posturing, just Belz and her minimal crew observing Richter at work in his studio. The rooms are stark white, with few windows or doors, and so quiet you can hear the birds chirping. But Richter’s painting – surprisingly robust and full-bodied – soon creates a soundtrack of its own. The squish and slap of brush and paint is cut by the chilling, very loud scrape of a large squeegee across the canvas. For this series of paintings, Richter applied then scraped off countless layers of colorful paint. This process of “vernichtung” (destruction) yields deeply textured and inexplicably beautiful paintings. According to Richter, “they do what they want,” but this seems like cheek. He’s firmly in control, and it’s a shock to see him return to a canvas weeks later and obliterate what is there with a wide swath of paint. He alone seems to know when the process is done. In the end he seems pleased, calling the paintings “erwachsen,” which he translates as mature. 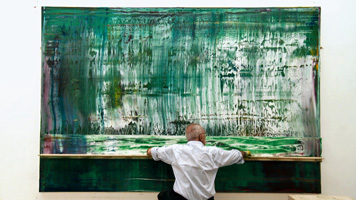 As much as I liked these zen studio scenes, Richter is a smart and caustic character, and he has a way with words. He winks and jokes with Corinna, all the more impressive when you see him grimacing through a fawning press conference. Richter is always aware of the crew’s presence, even at one point comparing being filmed to being examined in a hospital (not a compliment), but it’s clear that Belz has won his trust. Belz is not invasive, but it would be false to say she’s passive. Her voice often probes from behind the camera, particularly when she finds Richter rifling through a box of old family photographs. He was born in 1932 in Dresden, and grew up under Nazism and Communism before fleeing his Eastern city for West Germany. He escaped a scant few months before the Berlin Wall was built, and never saw his parents again. I know from my own family that Germans of that era have many things they don’t talk about, in part because much of it was unspeakable. Repression, or alternate means of expression, were the norm. It’s deeply moving to watch Richter grapple with these old photographs as he moves from the joy and nostalgia of childhood to the pain of recognition and loss. Belz’s questioning is restrained and respectful filmmaking, reminiscent of a scene in Bill Cunningham New York, where the photographer is asked about his largely abstinent life, bringing him briefly to tears. In contrast to so much of the hysterical blathering that these days passes for drama, this kind of pain is stark and private, driven and buried by history, and all the more powerful for it.

On a practical level, artists also have much to gain from Gerhard Richter Painting. Being a famous painter creates certain demands, and Richter and his assistants attend to tasks outside the timeless womb of the studio. I was fascinated by the models they build for gallery and museum exhibits, replicas of the space that are painstakingly filled with miniatures of Richter’s work. There’s also paint to be mixed, and meetings to take with gallerists and curators. But Richter is clearly most at home while working in his studio, bringing his paintings into being. Talk is cheap after all, but work is priceless.