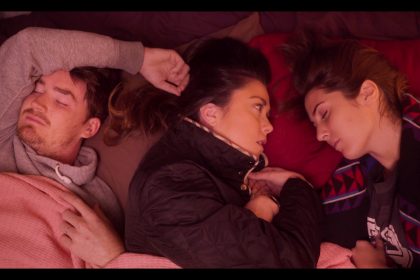 ( Victor Neumark’s feature First Blush  had it’s debut at NewFilmmakers LA, (powered by Seed&Spark). Like what you see here on Hammer to Nail? Why not give just $1.00 per month via Patreon to help keep us going?)

In Geometry three points represent the strongest shape. In the poly-community it is a well-understood fact that three people or a triad is the most difficult relationship. Victor Neumark’s film FIRST BLUSH allows the viewer in on an experience I suspect many people have imagined but few people have enjoyed. And I would guess even those who have ‘enjoyed it’ sometimes have not enjoyed it.  It’s not to give anything in the film away to say that poly relationships can be delicately built and that they often break and even break those inside them.

While I don’t know if Victor Neumark himself has experience inside a poly relationship, as someone with many friends in the poly-world I would say the experiences felt by Nena, Olivia, and Drew read authentic. At the open of the film Nena and Jason’s marriage is not necessarily failing, it’s just not necessarily interesting. It doesn’t even seem interesting to either of them. When a surprise 30th birthday party propels Nena into a chance encounter with 25 year-old Olivia, the sparks that fly between the two women eventually spread to Nena’s marriage. Drew suspects bringing Olivia into their relationship may be something Nena needs to make her happy. And they lived happily ever after.

Yeah no, because poly relationships are complicated. Especially when they are a first for everyone involved. In addition to jealousy felt towards people outside the relationship, there is the new internal jealousy of the relationship two members might develop apart from the other. The triad also has to face the judgment of friends who don’t understand what they are doing and see it as some sort of weird deviancy. All of this comes across perfectly in First Blush. While the material could easily lend itself into erotic thriller territory or mumblecore analysis paralysis, instead Neumark embraces the inherent drama of the situation and lets the conflicts play out in duos, trios, quads, and quints as the scene requires, always leaving us in the thick of it long enough to become almost as uncomfortable as the characters in the scene. That’s not to say it isn’t hot, cause it is. But the grounded nature of the relationship may do a lot to explain polys to their vanilla friends.

I also want to praise Neumark for his understanding of kink. Drew’s admission of his submissive place in his marriage, the desires it gives him, and his complicated relationship to those feelings is one of the best portrayals I’ve ever seen of that. If Nena is searching for excitement, then Drew is searching for a someone that can be for him what his wife never could.

First Blush succeeds as a film not because it is charting undiscovered territory, but because the character portraits of the people inside the poly triad are so complete, both on their own and in how they play off of each other. Drew’s need to make Nena happy pays off later in the film when the intrinsic imbalance in their relationship become apparent. Olivia is suffering from lack of confidence, as at 25 she has found her career as a model disappear. From the Triad she receives support and strength and self-worth, something not supplied by her spoiled and self-obsessed trust-fund gay brother. Nena wears her issues more firmly on her sleeves. She is a control freak who suffers from near crippling anxiety. “You know that feeling when you’re not sure whether or not your sunglasses are still on the top of your head?” she asks Olivia when they first meet, “that’s my whole life.” Each lover finds something in the rest of the triad they cannot achieve in a more (I was about to say standard, but fuck that, I’ll say) commonplace relationship. By focusing on the people, and not glorifying the sex or filling the frame with arthouse trapping, Neumark gives the poly world what it needs, a simple love story, one that says poly people aren’t a whole lot different than non-poly people, and maybe they know better.

I read one review of the film that criticized it for its whiteness, so I’d like to defend the film against this misguided criticism. This is a film ABOUT privilege. These people are able to moan about their relationships and how hard it is to truly feel love because that’s all they have to worry about. Other than Olivia’s failed modelling career, I don’t even know what the members of the triad do…I know Drew works from home. And Nena doesn’t. And that is what matters to the telling of this story. If one member of the triad was not a white person, the film would probably be very different, but that’s not a critique of this film, that’s a critique of society. There is no better shorthand to say ‘privilege’ than to cast a white person. And the complications of a poly relationship are enough to carry a film. Besides, Victor Neumark is a white guy (not surprisingly he looks a lot like Drew), do you really think he needs to be telling a story of race relations, something that would enter the plot inescapably if one of the triad were not white.

So yeah, First Blush has a bit of the ‘Unbearable Whiteness of Being,’ but isn’t that sort of the point? Drew and Nena seek Olivia out as an intentional way to complicate their rather bland life. Olivia has gone from a moment in life where she felt singular to being just one of mobbed millions of pretty white girls in Los Angeles. The one Black character, John (Christopher Moaney-Lawson) achieves a very telling moment when he criticizes his fiancé’s (played by Jordee Kopanski) father who does not support their marriage. They aren’t ready, he can’t support you. John says “your father’s an asshole.” What he doesn’t say is “your father’s a racist,” but that’s what I heard. It may have been a case of selective omission, telling of John’s precarious place in this world of hummus, coffee houses, and game nights. Rather than critique the film for what it is not, I want to praise the film for the genuineness it achieves about the people that live inside it.  This is their world. Its unbearable. This is what they do.