(Family Instinct sneak previewed at the 2011 True/False Film Fest before US premiering at the Los Angeles Film Festival on June 17, 19, 20. It won the Sterling Award For Best World Feature at Silverdocs, and screens for the first time in NYC on June 26 at Rooftop Films.)

Zanda is a pretty, tomboyish Latvian with a raspy rock-n-roll voice. She’s looking a little hardened at age 28, and has two young children by her brother Valdis, who has just been taken to jail for “old sins.” She waits for his return like a devoted wife, despite getting a series of hate letters from him. And she’s actually the voice of sanity at the center of a small community of violent, drunken family members and neighbors in rural Latvia. Family Instinct is a film that defies categorization—it’s a documentary that seems largely staged, and a tale of human misery that’s as funny as it is disturbing.

Director Andris Gauja plays fast and easy with authenticity—at times his multiple-take coverage is pretty blatant—but even in clearly staged scenes it’s fascinating to watch these guileless characters play-act their own lives. Much of the film’s first half is a genuine fly-on-the-wall look at some seriously damaged humans getting wasted and sloppy, glugging beer from plastic 2-liter bottles.

Less-than-smooth suitors come around Zanda’s house. A grimy bruiser named Oscars shows up trying to sell a live chicken to make beer money, then cuts to the chase: “Can I sleep here tonight?”

Andulis, an elfin little man-child, is the most persistent, coming round and offering to help Zanda by “sawing wood, fetching water,” but lacking the courage to make eye contact with her, even after what he refers to as “one small beer.” When she challenges him to bring her a Christmas tree he shows up with a few scrawny branches, even smaller than him. She disappointedly hangs the thing from the ceiling, and the kids decorate it with pieces of toilet paper. 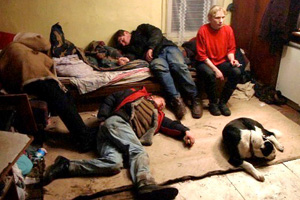 Gauja doesn’t hold back on dark humor. At one point he indulges in a little pastoral beauty, showing the women resting from work out on the farm; he cuts from Zanda happily laying back on a mound of hay to a matching shot of a dog rolling on its back and growling.

He also has a knack for creating live-action-cartoon compositions, like in the scene where a very drunk man and woman watch a dog delicately (maybe accidentally) maul a tiny puppy, as a third person lays passed out on the floor. As they argue about whether the woman—wearing an impressively groovy dress— is a bitch, funny looking characters wake up from a slumped over state, until the frame is crammed full of people. The camera drops down and a confused, drunken face fills the foreground, like something out of Popeye.

When Gauja takes us into the sterile environment of the social workers assigned to Zanda, it’s a stark contrast to all the messy humanity, but seen through his lens this world too has a cartoonish quality: the stiff hair, the Soviet-era geometric blouses, the sad plastic daisies on the wall. “Everything’s been decided,” they pronounce, ominously. But after seeing the cold and boxy apartment block where they want to put her, Zanda literally runs back home with the kids.

The second half of the film grows out of the swampy physicality of the first half with frightening momentum, building in emotional intensity and bold artistry in scene after unforgettable scene. As Valdis’ release from prison approaches, Zanda is confronted with the reality of losing her children, while desire drives the men around her to increasingly bizarre manifestations of passion, and, in Andulis’ case, a series of touchingly inept pleas to run off together.

Family Instinct is a film that creeps up on you—what seems at first like a good-natured laugh at Latvia’s version of white trash turns out to be a tragicomic mashup of moods and genres, cut through with a delight for irony and absurdity. It’s a swaggering but sensitive piece of film art by a visionary young talent.