(The Hurt Locker is being distributed by Summit Entertainment. It is now available on DVD

The notion that war changes men for the worse is not a new one and it has been explored in cinema more times than any reasonable person should be able to recall. That said, I’ve yet to see a film dramatize that premise with such intelligence, veracity, paranoia and sheer aesthetic pleasure (and pain) than Kathryn Bigelow’s The Hurt Locker. This is the type of product that the American movie industry—a series of interlocking private ideological enterprises in a country that is fighting two wars and was, until recently, hankering for a third—has a moral responsibility to make. No wonder it was financed with European money.

I know a few casualties of the Iraqi war. Not many, but a few. People I know. People I like. Although I only know one man that has died—Specialist Anthony Kaladeen, my freshman year RA at Purchase College, killed in an ambush on August 8th, 2005 while serving his second tour of duty)—I know several other men who, despite having returned home from Iraq, are still fighting in a war that takes place in their head. This is a war that will never end. The physical realities of bombs and guns, the desire to find purpose in the actions one takes with such tools, the culpability for ending another man’s life, the rage and sorrow of watching your friends prematurely expire, these are circumstances that once arrived at can be nearly impossible to shake, that can be fatal for the soul.

One of these men I know, a skinny kid with an insidious intelligence who loved video games and Civil War reenactments, one who saw the fissures in the pervading conservative ideology of our youth (yes, there were high school kids who thought Bush/Cheney 2000 was a good idea) but could never quite articulate them for himself in a way that broke them in his own head, one who shall remain nameless, he’s back in Iraq. Civilian Security Contractor (Mercenary). It’s where he belongs now. He wants to kill people. Or at least to have the chance. Without it, he no longer knows who he is. 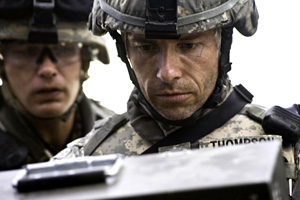 In Ms. Bigelow’s film, we watch as a charming young Explosive Ordnance Disposal tech (Jeremy Renner, outstanding) slowly loses his shit. Intense. Searing. Visceral. None of these words get at what it’s like for a man to strap on a head to toe Kevlar suit in one hundred and ten degree heat and walk down a desert street in small town six thousand miles from home and defuse an improvised explosive device that’s hidden under a trash bag while suspicious Iraqis, people who will never trust us after the tragic folly of the past six years, watch him with anger in there eyes, any single one of them a possible remote trigger man.

This is a film that casually kills off Hollywood movie stars (Guy Pearce in a virtuoso opening sequence, Ralph Fiennes in the film’s only shootout) and could care less about making political points via dialogue and contrivance. The politics are all right there in front of you. You extend a hand in friendship, you occupier, and watch yourself get blown to bits. Toughen up. Freedom for these people is the objective and we achieve it through sitting here with tanks we never use, driving around in Humvees, occasionally rebuilding a road, occasionally shooting a Hajj in the face, scared shitless the whole time. To what end, who knows? The personal is political and for men who become so addicted to war that they can’t help but go back, even as it tears them apart, the political lie (this war is necessary) has led to a personal truth (I am nothing without war).

Anthony Mackie, Brian Geraghty and some guy who looks like Billy Crudup but isn’t all do terrific work in the film, but this is Ms. Bigelow’s show. Muscular, virile, all those lame-o masculinist adjectives, they find a true home in Ms. Bigelow’s oeuvre. There is not a single aspect of the aesthetic construction of motion pictures that Ms. Bigelow does not excel in. Long known as the best female director of action movies who ever lived, she is, as Manohla Dargis so eloquently pointed out last Sunday, simply a great director. An ace genre deconstructor, Bigelow has made a tricked out vampire western (Near Dark), a heist movie (Point Break), a revenge thriller (Blue Steel, my favorite. RIP Ron Silver) and in her vastly overlooked 1995 film Strange Days, a film that borrows from sci-fi, noir and the unrest of post-Rodney King Los Angeles. It is still one of the definitive treasures of mid ’90s mainstream filmmaking (that was a bad summer for speculative Sci-fi—anybody remember Brett Leonard’s Virtuosity?). With The Hurt Locker, she has finally delivered her masterpiece, a movie that contains thrills that rival any of the focus-grouped studio tentpoles that have and will continue to roll out all summer, but which actually has a reason to exist in this troubled world other than to make the rich and glamorous even more so.