(Silent Light is finally getting official American theatrical distribution by Palisades Tartan. It plays at the Film Forum from January 7th-20th, and will hopefully be expanding throughout the country after that. Also, it can be bought as an import DVD release here. Visit the film’s official website to watch the trailer.)

The walls, the ceilings, the door frames in Carlos Reygadas’ Silent Light all seem to bend slightly, as if bowing under some great weight. It’s an effect of the wide lens with which the film’s photographed, and it’s exacerbated when the camera pushes in for a close up on the characters: as their faces and the secret torments lined therein grow clearer, the world around them buckles. But then, when the camera moves outside, that world unfolds, unfurls. The wide lens has two converse effects: it captures the weight of heaven indoors; outdoors, it reveals heaven’s entire expanse.

In literal terms, of course, heaven is just the glorious skies of the northern Mexican countryside, and its weight is simply the conscience of the characters who move stoically against them. But there seems to be some sort of divinity present in both, and to say that it is merely a trick of the camera isn’t to belittle it; one of Reygadas’ greatest achievements is that he stitches his supremely human narrative together with imagery that’s possessed with a preternatural grace. Perhaps the lens itself represents a divine perspective. If so, Reygadas has reappropriated and repurposed the trope of the God’s-eye-view, which in traditional cinematic terms refers to a vantage point from high above, looking down on the drama and the characters. Here, God is on the ground, in the dirt. Looking up, looking straight ahead.

Like Reygadas’ first films, Silent Light is set in Mexico. This time, it takes place on the hills and plains of Chihuahua, amongst a small community of Mennonites who’ve laid their stakes there in the land. He focuses on a single family, whose patriarch, Johan (Cornelio Wall), is thinking of leaving his wife Esther (Miriam Toews) for another woman, Marianne (Maria Pankratz). He is not happy about his transgressions, nor nonchalant; he weeps alone at the dinner table, and later consults with his own father about this terrible passion that’s consuming him. “You cannot have both,” the old man tells him, going on to offer the sort of advice that will likely be lost on Johan until the day he has to pass it on to his own son.

Adultery is forbidden in the Mennonite faith; so too is divorce. The Mennonites represent a denomination of Christianity that originated in Central Europe and has since been disseminated in tiny groups across the globe. Their practice is an austere but gentle one; they live simple, agrarian lives. Their devotion to Christ is tempered in nonviolence, pacifism and the virtue of reconciliation, and it is out of these tenets, rather than the complications of plot, that the narrative of Silent Light emerges. This does not mean that the film is specific to Mennonites; rather, Reygadas has found in his subjects classical, nearly iconic representations of Man and Woman. “I wanted archetypes,” he told Time Out London last year. “It’s not a film about Mennonites. It’s a film about people.” But those people, in his own words, are “uniformly monolithic.” Indeed, their physical presence, the timeless manner of their life and speech and the their quiet, stoic piety renders them both iconic and transparent. Their every movement betraying the emotions they’ve quelled within them. This is what Bresson was after with his actors, whom he referred to as models, and it is what Reygadas has achieved perfectly with his cast, none of whom have ever performed before.

The story itself initially seems an archetypal one, whose opening sequence, in which the camera tracks across a field of stars before coming to rest in a field as the sun rises, positions it on a nearly mythical plateau; it captures the opening of Genesis in a single bravura shot. When a filmmaker tells a story in such broads strokes, he or she does so because it allows certain ideas to be explored without exposition; when the scope of a story is already understood, already deeply seated in the audience’s understanding of narrative, those audiences are more perceptible to the details and nuances the filmmaker is able to explore and play with within that structure. Thus, we can accept Johan’s torment without question, understand that Esther will find out about the affair without unnecessary suspense or melodrama, and instead focus in on the first thing that Esther says after making the discovery: “Poor Marianne.” Her selflessness, required of her by her faith, places the weight of the situation on the other woman, the sinner. She’s relying on her faith to bear her burden.

It is here that the film reveals itself as an exploration of the point at which faith fails. It fails Johan in that it allows him to be overtaken by passion, and it fails Esther, who also succumbs to passion, albeit of a very different sort. His undoing begets hers, and together they arrive at the same moment Christ did on the cross, when he cried out to the God who seemed to have forsaken him, and where it is then up to that God to reciprocate, to reach out and meet them at their breaking point.

I’m being purposefully vague here, partially because going into anymore detail now would ruin the experience for audiences, but more so because, having seen the film only once at this point, I’m not sure I can adequately write about what happens in the last act. Reygadas ends the film on a note of redemption for all of its fallen characters, but at whose hand I cannot rightly say. Likewise, I’m not yet sure whether or not the presence of the divine is intended to be taken literally, which is what finds me returning again and again to the visual form of the film. Reygadas takes some recognizable cues from Bresson and Tarkovsky, both of whom he reveres, but his camera lacks the passive objectivity of those directors. It frequently finds its subjects in magnificently, stately compositions that endure for long periods of time, but just as often it roams, it follows, it pushes and pulls. The lens itself seems an omniscient character: the flares refracting against it, the dirt and specks that hit it, the spherical distortions that its width imposes on the characters and their environment. It’s active; it’s never not there, and the way the final sequence of the film is shot, one senses that perhaps Reygadas is implying that it represents more than just our own window onto these characters.

Regardless, the complexity worked into this simple, graceful fable is enough to warrant multiple viewings of both this film and Reygadas’ last work, Battle In Heaven, which took a more sensational approach to finding God in the mundane. There, Reygadas entangled spirituality with sexuality, fusing the two into a fascinating, troubling, and not altogether successful amalgamation of the sacred and the profane. Here, he begins with sexuality, but quickly moves past it, past what’s corruptible and resolute. He’s after something far more elusive and difficult to define, and by the time he arrives at the final shot of the film—a mirror of the first, a slow push towards the horizon as the sun sinks behind it—he has, at the very least, caught a glimpse of it. 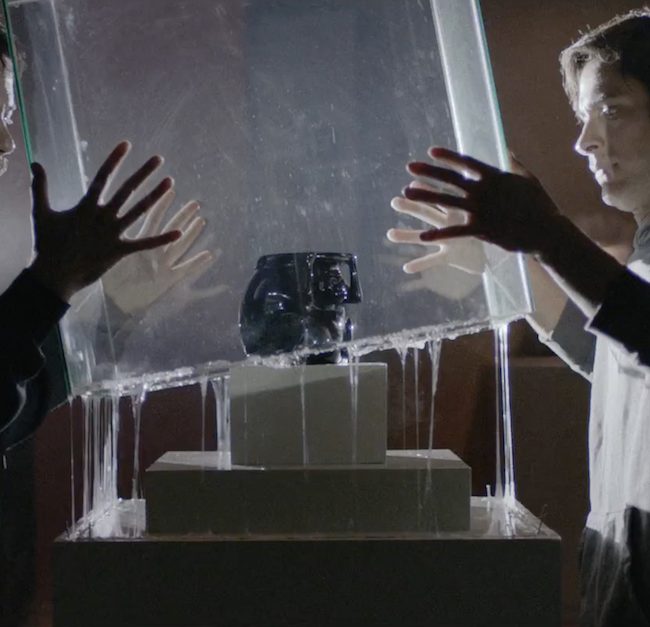