Action
Drama
In Theatres
On the Festival Circuit

I think one thing we all crave in our movies is originality. We all want to see something we have not seen before. In reality nothing is totally original. Some say, for example, that there are seven basic plots and that all films are just variations on these same old stories. Luckily story alone is not what makes cinema engaging. It may be for some Hollywood-entertainment-as-first-priority types, but for this viewer, plot is not what leads to great cinema. I cringe every time I hear some teacher or producer say, “It’s all about the story/script.” Severed Ways: The Norse Discovery of America is a film about two lost Vikings in the year 1007 AD who get stranded in North America and must find their way in the New World. Along the way they encounter Christian Monks, Indians, and their own dreams and misconceptions about Christianity and Love. All of this is accomplished through the magnificent lyrical journey that brings us into direct contact with the mysteries of the New England woods. As in many journey/road films, there isn’t much of a plot, but in this case there is plenty of story, despite the minimal dialogue.

If I had to pick one favorite genre of film I’d have to pick the “Man On a Journey In Nature” genre. I don’t know if it’s because I was born and raised in New York City and I just love being in nature in a movie theater without having to suffer the bug bites and threats from lurking animals. Or maybe it’s just because I love the lyrical pace that reveals plot through the character’s visual interaction with space. Again, this is the unique quality found only in the medium of film, and it’s the reason why I love Apichatpong Weerasethakul’s films and why my favorite Hollywood genre is the Western. Likewise, it’s why I love the non-narrative films of James Benning, Larry Gottheim, and Peter Hutton (who Severed Ways writer/director Tony Stone studied under at Bard College.) 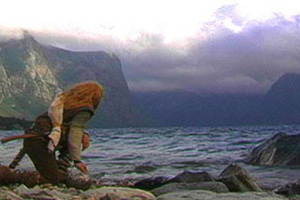 It’s the reason why my favorite film in 2007 was Los Muertos, a basically silent picture about a man traveling through the jungle to his remote village after being released from prison. For me, the mark of a successful landscape film is the degree to which the land becomes a character in the film. This is of course accomplished through framing, lighting and staging. It’s the reason why I consider some landscape/journey films like Gerry, Into the Wild, and most recently Birdsong to be failures. In the lyrical landscape film I want to be situated inside that space, surrounded by it, as I was in the dank thick Oregon woods in Old Joy. Or the way I felt the cold stream that Jimmy Stewart crawls through in the Anthony Mann’s Bend of the River.

In Severed Ways, we are treated to the tactile experience of sloshing through the overgrown marshes, of cutting down trees with an ax, of catching a fish with a spear and cooking it over an open fire. We are even treated to the experience of shitting in the woods where green leaves are your only toilet paper, a scene that took me back immediately to another classic landscape/journey film, Wim Wenders’ Kings of the Road. In short, Severed Ways is framed, edited, and staged with brilliant success, in part I am sure because as Stone explains in his director’s notes, he’s been playing in these particular woods since he was a child and it is his love for this place that so deeply informs its every frame.

On a technical level, I can tell that some of this uniqueness is due to the director’s multi-faceted narrative voice exercised most notably through his use of Heavy/Black Metal music and Godard-like chapter headings, but in reality those things alone don’t account for the alchemy that transforms genre elements into a single concoction that adds up to nothing other than a Tony Stone Film. This is what we talk about when we talk about a ‘unique voice.’ This is what we cite as an example of an artist who has a complete grasp over the plastic elements of his medium but both has something to say and an original way to speak. This is what we mean when we say, “This is an amazing film that announces the arrival of a groundbreaking new voice.” This is Severed Ways: The Norse Discovery of America. See it this week and demand that your projectionist turn up the volume.