OF GODS AND MEN

(Winner of the Grand Prix at Cannes 2010, Of Gods and Men is now available on Blu-ray

or in a 2-Disc DVD/Blu-ray Combo Pack

. It opened theatrically in New York and  Los Angeles on February 26, 2011, and will be receiving a wider release throughout March and April. A full list of dates is available at its official website.)

Ambiguity surrounds the collective fate of seven of the nine real-life monks portrayed in Of Gods and Men. Conventional wisdom suggests that any film about them is likely to be an imagined chronicle of their last days if not a shoring up of Christian-Muslim tensions; not so. Rather, director Xavier Beauvois matches the discipline of his subjects, imbuing their tale with a stoicism that at first seems poised to feel like cold sermonizing but gradually takes on the air of a collective chant—modest but compelling. This shows itself everywhere, from the quietude of the monks to the serenity of the locale. For instance: The humble monastery and surrounding Algerian village that serve as the film’s setting do not evoke the splendor of God, at least not in an obvious way. The land is mostly brown, undeveloped, and under constant threat of attack from a group of militants. In a way this is telling, for Of Gods and Men—a meditation on faith at its most tested seen through the lens of actual events—does not aim to glorify religion. Neither does it lament its hardships. Instead, Beauvois presents both the monks who inhabit this monastery and the largely wordless bonds linking them together with an evenhandedness as solemn as it is ultimately uplifting.

Largely apolitical, what Beauvois presents is more of an olive branch than a call to arms. Led by Brother Christian, the monks seek only to live harmoniously with the Muslim population of Algeria; this is somewhat reciprocated by the militants’ first leader, who at one point responds to Brother Christian quoting a passage referring to the brotherhood between Muslims and Christians with an offer of a handshake. (After a moment’s hesitation, Brother Christian accepts.) Of Gods and Men shows its true face in such moments, and it’s one of peace and quiet understanding. This is a soft-spoken film, and one whose light touch allows the inherent danger of what’s taking place to speak for itself. Elements that could have been misused by overstating the goings-on—which are admittedly heavy—are instead used to bring out their inherent tranquility. 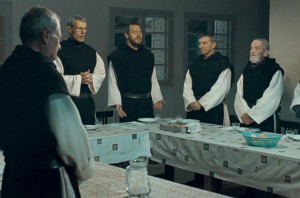 Form and content walk side-by-side here, and it’s more akin to a contemplative stroll than a jaunt: Of Gods and Men looks and feels as austere as the monastery of Tibhirine in which it is set. The colors are muted, the camerawork straightforward. This appears, at first, to create something of a distance between viewer and subject, but after a short while the formalism of Beauvois and his exceptional cast settles into a rhythm all the more compelling for its restraint. So committed to this approach is Beauvois that he maintains it even when the film enters crisis mode. Rather than forego his control in favor of formal abandon (and allow the movie to devolve into some sort of actioner), Beauvois—like the men he portrays—shows restraint. And though a cloud of dread looms low over the proceedings, Of Gods and Men is not awash in it. The monks’ hope is too indomitable a force, even—and especially—in the face of death.

Still, Beauvois makes no attempt to lionize these men. They’re portrayed as being devoted, yes, but not lacking in reservation or worry. “Why be martyrs?” one of them asks, reminding us that men of God are subject to the same trepidation as anyone else. Faith in this film isn’t a wistful, otherworldly power; it’s a hard-fought battle with uncertainty. What crises of faith this doubt leads to are largely internal, save for one. “I pray,” says that same man mentioned above, “and I hear nothing.” This is the film at its most explicit—such thoughts are otherwise expressed through mere gestures and glances, leaving the monks with their pondering and us with our own. This might at first seem to be a fault, given that Beauvois, far more concerned with why the men decided to stay than the exact circumstances surrounding their deaths, does not fully answer that same question. But a bit of reflection makes it clear that he doesn’t mean to. Of Gods and Men‘s portrayal of its subjects is intimate in its own way but also makes it plain that each man’s faith is his own; to go too in-depth would be an intrusion of sorts. In leaving a good deal unspoken, Beauvois subtly and implicitly achieves the sort of ethereality it seems he’s trying to avoid. The actuality of what’s happening is enough, he seems to be saying—it need not be dressed up or embellished in any way.

As such, the film finds much of its meaning between moments, between words. God may be silent, but that doesn’t mean these men have abandoned all hope and quit listening for him. It thus becomes apparent that in eliding the sort of onscreen revelations we’ve come to expect from films such as this, Beauvois manages to underscore their transcendence. In so doing, he shows a mastery over subtext.

An exception to this understated austerity occurs near the end of the film. Heretofore unaccompanied by any music save for the monks’ diegetic chants, Of Gods and Men is suddenly alive with a passage from Tchaikovsky’s Swan Lake as cinematographer Caroline Champetier slowly cycles between closeups of each man’s face. Explicit signs of emotion are a rarity in the film—both on the part of the men themselves and Beauvois’s portrayal of them—but here we see tears and smiles in equal measure, all of them bittersweet as the monks sit down to what is essentially their last supper. The moment is made all the more poignant by how exceedingly understated the preceding two hours are, especially because it is ultimately one of joy: Each man is content with his choice, not least because his brothers have all of them reached the same one. Theirs is a daunting path, but they do not walk it alone.