The relationship between sisters seems eternally ripe for drama; the kinship, the mixture of compassion and competitiveness, it’s endlessly fascinating psychological material, and it’s always compounded by the introduction of sexuality into the equation. Woody Allen’s traded in this material plenty of times, to both comic and dramatic ends; more recently, Noah Baumbach turned a game of one-upmanship between two sisters into a horrifying comedy of errors; and then of course there’s Catherine Breillat, who with Fat Girl cut into developmental studies with a nasty, jagged blade. Director Myna Joseph treads the same territory with her acclaimed short film, Man, but as both writer and director, she maintains a tender but passive stance; she does not employ the characters to any ends but their own, and plays their mistakes and humiliation not for laughs or to make a point but simply as moments in her characters’ lives. She’s like Breillat without the avarice.

The film is about Maggie (Sarah Steel, last seen as Adam Sandler’s daughter in Spanglish), who one afternoon takes a peak at her older sister’s IM conversation with an anonymous young man. Maggie is the younger of the two, not so traditionally pretty as her sister but more confident and surefooted in her ways. Still, it’s as much out of curiosity as concern that she ventures through the woods after her sibling, finding her inside an abandoned house, in an amorous embrace with a boy who’s a little bit older than her but clearly just as inexperienced. 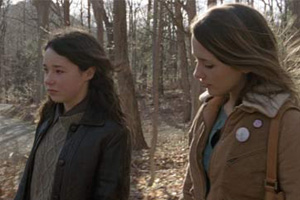 Maggie makes her presence known, and what follows is a competition of sorts in which each sister tries to prove that she knows more than the other about sex, about men, about one another. The hapless young fellow caught between them is neither vilified nor exonerated; he’s an idiot, to be sure, but he quickly becomes a pawn which both sisters use in an attempt to gain advantage, to make their points. In spite of the title, Man is not about him, or what he represents; for better or for worse, he’s nothing but a stepping stone.

I mentioned that there’s something of Catherine Breillat in this film; so too is there something of the Dardenne Brothers, whose influence is beginning to trickle down into new American cinema. Working in 16mm with her cinematographer Chris Teague, Joseph frequently keeps her camera in close proximity to her lead actress, hanging tight but ultimately breaking away before a sense of subjectivity overtakes the film. Unlike the Dardennes, however, Joseph doesn’t attempt to find a moral solution to the issues at hand; indeed, there really isn’t one. Perhaps the choice Maggie’s sister ultimately makes is the wrong one, but it’s her problem to deal with, and she’ll get over it. Man is not a sermon or an after-school special about the evils of adolescent sex. It’s a film about growing up in tandem, about sisters realizing they’re not yet the women they’ve been racing to become.