Fb. In. Tw. Be.
Coming of Age
Drama
On the Festival Circuit
Small Town Life

(Better Things is screening as part of “Film Comment Selects” at the Walter Reade Theater. Visit the film’s French website to watch a striking trailer.)

A sublime experiment in mood and texture, Better Things is that rare film which seems like a whole—albeit weighty and unforgiving—statement about one of the central conundrums of western living, which provides an answer to this fully loaded question: is finding solace in the love of others possible? Writer/director Duane Hopkins’ answer: in a word, no.

The boredom of youth. It’s a popular topic for young filmmakers. However, few have treated it in the context of an all too quickly expiring life, the consciousness of it, as well as the ways in which the young resemble the old. These are just a few of the thoughtful thematic discourses one could take from Better Things, as it unfurls the story of three couples—two young and one old—who, amidst a still and pallid British countryside rife with hard drug abuse and existential malaise, struggle to deal with oncoming feelings of meaninglessness and, especially for the old, the looming specter of a lonely death. 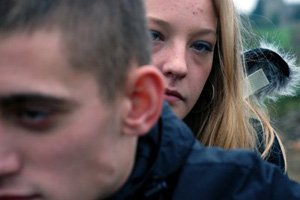 The narrative spirals out among the grievers of Tess (Emma Cooper), a young woman who in the film’s first half-dozen shots is lost to a heroin overdose. Her boyfriend Rob (a fantastic Liam McIlfatrick), who also happened to be her heroin dealer, confides to his friend David (Che Corr) that he blames himself for her death. He lacked the courage to face her parents and attend the funeral. As he begins a slow, self-inflicted disintegration, David and his girlfriend Sarah (Tara Ballard) engage in a bit of MDMA-enhanced sex and contemplate a better, or perhaps just different, future elsewhere. These two strands are complemented by another, which follows an aging couple who, due to unspoken secrets from the past and their own burgeoning existential dread, seem incapable of giving each other the attention and love they mutually desire. All these affairs are presided over by an intermittently present narrator, an agoraphobic young woman who doesn’t so much comment on events as she muses of the impossibility of love’s warmth to solve our earthly dilemmas.

Like many filmmakers who come from fine arts backgrounds, newcomer Hopkins seems to be building his cinema from the ground up. The visual language of cinema is so well tread and developed, even for a relatively youthful medium, that it becomes an unusual treat to find a film that seems to be working on an at least partially unexplored plane. Perhaps that’s just big talk—who hasn’t seen static shots of desperate yet unemotive faces in claustrophobic British homes and barren, country landscapes before?

Better Things certainly has its aesthetic forbearers. Yet this powerful anti-drama, which in many ways resembles the work of fellow UK filmmakers Lynne Ramsay and Alan Clarke, seems to narratively, thematically and stylistically point in a direction that is a distinct departure from the school of British miserablism (think mid-career Mike Leigh) that it could easily be lumped in with. From its harshly intercut narrative threads that merge vaguely through only the most subsidiary of characters, to Hopkins’ bleak but thoroughly empathetic look at the travails of coupling, addiction, and emotional honesty among these earnest, mostly unfulfilled people, his vision stands on its own.

A sparse, unrelenting, and poetic drama that never shies away from its depiction of various human frailties, Better Things is a film that has the power to make one feel so trapped and so terribly resigned to the most deflating of emotions, yet simultaneously it proves capable of delivering the pleasure of a life looked at unblinkingly.