(Bad Lieutenant was just re-released on DVD in a special edition package by Lionsgate. Buy it at Amazon

“No one can kill me. I’m blessed. I’m a fucking Catholic.” – The Lieutenant (Harvey Keitel)

Some films become emblematic of the times in which they were made. Other films become emblematic of the times in which you watched them. Few embody both. For me, such a rare film Abel Ferrara’s Bad Lieutenant is, as it meets both roles. A hard and unrelentingly lurid policier, one that doubles as a tale of spiritual confusion and longing, of desire for Christian love lost, it contains long time Ferrara muse Zoe Lund’s last film role and Harvey Keitel’s best, but its value is more than anthropological or thematic. Sure, it stands as a testament to the New York I never got to see (I moved to the city just after Giuliani’s era of crime busting and Disneyfication had come to an end), and yes, it’s as spiritually engaged as anything by Bresson, Ozu or Tarkovsky, but more than that, it speaks to the era in which I began to take the movies seriously, to see them as more than just facile entertainments.

I don’t know how many times I’ve seen Bad Lieutenant, but it’s more than any reasonable person would ever admit to. It became a sort of rite of passage while I was in film school (and afterwards), the movie you would hijack a perfectly civil gathering with, a litmus test for those new to your cinematic circle (i.e., if you can appreciate this movie, if you can go all the way with it, then you can be part of our gang). Although I was never Catholic, going to an all boys Parochial school has a way of inundating you with that particular Christian denomination’s at times peculiar and sublime preoccupations. Rarely has any filmmaker delved into the manifestations of the unattainable that Catholicism wraps its purveyors in with such potent and lurid energy as Abel Ferrara who, on the eve of the Venice unveiling of Werner Herzog’s less than Abel sanctioned “remake”, just presented his masterpiece to an audience willing to pay fifteen dollars to see it on a DVD, all to save our beloved last lower Manhattan video store standing, Cinema Nolita.

I initially saw Bad Lieutenant in an R-rated, pan-and-scan version I rented from a since closed Blockbuster Video store in the late ‘90s. I was too young to see NC-17 movies in the theaters and certainly had been far too young to see Bad Lieutenant when it would have played at Cincinnati’s Esquire in 1992 (yes, the Midwest does have arthouses that aren’t in Chicago—my hometown has two), so it wasn’t until a few years later, while watching a scene from the film in a directing class at film school, the scene where Keitel’s Bad Lieutenant humiliates the two under-aged Jersey girls by masturbating on the side of their car after threatening to bust them for driving stoned, without a license, that I realized I had only seen a bogus, corporate video store version of the film that surely had been altered against its creator’s original intentions. And what original intentions they are. 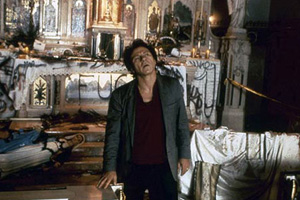 Ferrara is out to depict a man apart and at the bottom, a shakedown artist, alienated from his family, doing bumps of coke while dropping his boys at school, largely too lazy (or drugged out) to satisfy his sex addiction, stealing drugs from crime scenes, spiraling into insurmountable debt as the Mets (the team this Queens-based cop ought to be rooting for) have a seemingly insurmountable three games-to-none deficit in the National League Championship series against the Dodgers (whom he’s actually betting for, even as he tells his fellow cops to bet on the Mets). Indeed, “Strawberry is killing us.” (A quick aside: two sports-related oddities in this film—Evander Holyfield’s visage awkwardly dominates the final shot, one which would be at home in the oeuvre of Michael Haneke, and the shot of the Mets winning the NLCS is clearly stock footage of a Dodgers/Mets regular season game, but you only discover that if you’ve watched the film twelve times and happen to be a baseball nerd.)

The film’s narrative hinges on the rape of a redheaded nun by a duo of nihilistic Latin crack smokers. The film depicts it as if some kind of disorienting, drug-fueled rave has taken over a Church; bathed in red light, the beautiful young clergywoman’s screams echoing across jagged, shaky hand-held shots, rosaries and candle sticks being used for all sorts of unholy purposes, it’s a sequence that stands apart from the rest of the movie by way of its manic amateurishness, as if through slipshod aesthetics Ferrara is preparing you for the thematic abandon the rest of this relatively handsome dip into the grime has in store for you.

How can she turn the other cheek and forgive? Keitel’s cop can’t figure it out. She doesn’t want to press charges. The young nun speaks of the boys as children in need. He’s been given the task of investigating the crime and as his fortunes turn for the worst, he begins to wonder in earnest: What Would Jesus Have Him Do?

It’s the end of the era in which New York hosted 2,200 murders a year, in which the city’s reputation as a playground for criminals, punks and oligarchs was soon to fade, but was currently holding steady. How does one so thoroughly corrupted by this place find solace in the symbols of piety that give this woman strength, resolve, certainty? For Keitel’s cop, they are more than just mere symbols—the film takes on the notion of the Christian God and his son’s divinity with the utmost seriousness, which comes to a head when Keitel (who invented his late, quivering, whiny pathos acting style with the film) literally imposes the image of Jesus on the cross onto a black parishioner while the cop cries and angrily asks Jesus, “Where were you!?” We never get to know if Keitel’s oh-so-bad cop has earned God’s forgiveness, if his final act of crack smoking kindness to the worst of the worst is penance enough, if but for the grace of God go I will prove relevant, but how can the question not haunt you after this trip through the fallen world Mr. Ferrara, a lapsed Catholic has invited you along for. This is a movie I’ll never stop pondering. 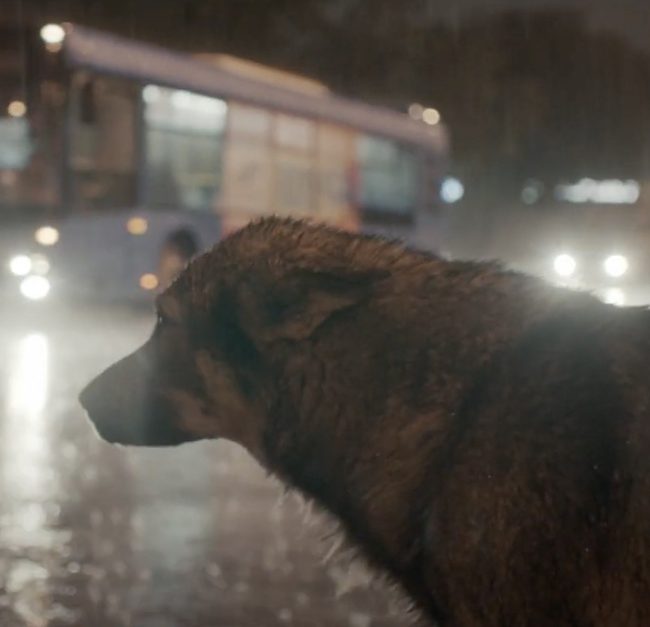