30 for 30
Documentary
On Television
Sports

(Winning Time: Reggie Miller Vs. The New York Knicks premieres on Sunday, March 14, 2010, at 9pm on ESPN. Visit the film’s page at the 30 For 30 website to watch a trailer and get a full screening schedule.)

Whenever I sit down to watch the latest ESPN 30 For 30 documentary, part of me tries to keep a tiny critical eyeball open to determine if this would be of any interest to viewers who like movies but hate sports. Yet almost always, my own affinity for athletics makes it impossible for me to deliver an objective verdict. In the case of Dan Klores’s Winning Time: Reggie Miller Vs. The New York Knicks, my gut tells me this is one of those entries that will predominantly appeal to NBA fans—Pacers and Knicks followers, especially—who experienced this legendary rivalry firsthand. (Having said that, I would love for any/all of you sports haters out there to prove me wrong by watching this film and reporting back to me in the comments section with your honest reactions. Go on, be brave. Do it!)

Notice the title of the film isn’t Winning Time: The Indiana Pacers Vs. The New York Knicks. That’s because Pacers shooting guard Reggie Miller wasn’t just the driving force behind this rivalry. He was the rivalry. Cocky, confident, and maddeningly slippery, Miller was more than just good. He was smart enough to know what buttons to push on his opposing players, and he was a master at pushing them. Especially when it came to Knicks guard John Starks, who became Miller’s biggest on court rival. 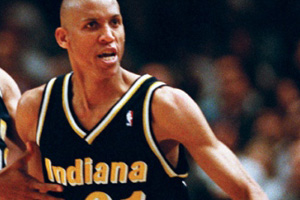 “On court” rival? What other type is there? As Winning Time shows, off court rivals can be pretty fierce too. Especially when they’re none other than diehard Knicks fan Spike Lee, who had courtside season tickets at Madison Square Garden and added a more dazzling layer of drama to the action. The Miller/Lee showdown reached a fever pitch during game five of the 1994 Eastern Conference Finals when Miller erupted and scored 25 points in the fourth quarter to seal a runaway victory. Miller flashed Lee the notorious “choke” sign in the process. It’s hilarious to watch Lee, fifteen years later, reading the newspaper headlines that appeared the next morning, in which they all blamed him for the loss.

An abnormally ferocious competitive drive like Miller’s has to come from somewhere. Early on, Klores reveals where Reggie’s was born: just down the hall, in his older sister Cheryl’s bedroom. Unfortunately for the upstart Reggie, Cheryl Miller was more than just an excellent basketball player; she was, without question, the greatest women’s basketball player in the history of the sport. Listening to Cheryl and Reggie talk about their sibling rivalry makes one realize just how special and rare (and cocky) the Miller family was.

While Klores does a fine job recounting the events that led up to Miller’s most historic performance against the Knicks, in which he scored eight points in 8.9 seconds and stunned the world in the 1995 Conference Finals, it’s hard not to fantasize about the movie Spike Lee would have made out of this material. Granted, it would have been a dramatically different, and perhaps less objective, creature, but there’s a straightforward approach to this version that keeps it from reaching the operatic heights of the games themselves. As it is, Winning Time: Reggie Miller Vs. The New York Knicks is an entertaining blast from the recent past and a testament to the power of sports at their most improbable.