(The Green Wave is now available on DVD

. It competed in the World Cinema Documentary competition at the 2011 Sundance Film Festival. Visit the film’s official website to learn more.)

“Iranians, it was once said, are afflicted by a unique strain of melancholy: Those who live in Iran dream of leaving, while those who were exiled dream of going back. . . . A country like Iran that has repeatedly been subjected to public heartbreak over the last few decades — most notably the loss of over 200,000 native sons in the ruinous eight-year war with Saddam Hussein’s Iraq — naturally confronts the self-inflicted death of a child of privilege with mixed feelings.”

— On the suicide of Alireza Pahlavi, the youngest son of the late Shah Mohammed Reza Pahlavi (from “Persia’s Little Prince” by Karim Sadjadpour; published in the 7 January 2011 edition of Foreign Policy).

It’s all well and good for us to complain about the privacy issues we’re all risking as we compulsively, and publicly, update the mundanity of our lives. That doesn’t seem to stop a lot of us from jamming the ionosphere with the latest posts and tweets about what we had for breakfast, how we’re feeling that day, or the latest triumphant monetary goal on Kickstarter. But what if these tools—our blogs, tweets and posts—were the only ways in which we could communicate when we were in real trouble? When no one from “the outside world” had any idea that the leaders whom we live under, in whom we place all of our faith and hope that our individual lives matter, had turned against us, were silencing us by cutting off our phone lines, our SMS feeds, our internet connections? And were brutalizing and killing us in the streets?

In its last presidential elections, the citizenry of Iran experienced a profound deception. Thus, the beginning of 2009 saw a revolution from mostly young Iranians who were placing all their hopes for change on the upcoming elections that June. A peaceful, non-violent movement called the Green Wave was fueled by the modern modes of communication. Journalists, lawyers, activists and students started blogs that challenged the status quo, calling for every citizen of Iran to personally participate in much-needed change by getting themselves to polling stations and casting their vote. The groundswell of excitement was abetted by the fact that there was every indication that Mir Hossein Mousavi would garner a sure-fire victory over the incumbent, ultra-conservative Mahmoud Ahmadinejad. However, on June 12, 2009, Ahmadinejad, who has the full and public support of Iran’s spiritual leader, Ali Khameni, declared victory with a majority vote. 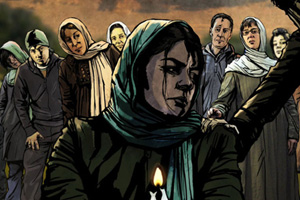 Ali Samadi Ahadi’s fourth film, The Green Wave, begins as a calmly narrated, fairly traditional documentary. The story is meticulously set up for the viewer, the omniscient narrator speaking in unaccented English in a clearly modulated voice. Through talking head interviews and slickly produced, precisely narrated animated scenes, the story of this second stolen election is revealed. The careful detail, the reliance of first-person accounts, the tone and mood of the country and the people at the time is explicitly recounted. Which makes the onslaught of the most horrid human rights violations that follow all the more shocking and devastating, whether it’s directly from live footage or from recreated animations, and gives this documentary its urgency as a powerful testimony to a revolution solely documented by the victims of a vicious crackdown by the state militia, one fully sanctioned by Iran’s governmental and religious leaders.

As we circle back again and again to our storytellers, particularly the journalist, Mitra Khalatbari, human rights lawyer, Shadi Sadr, and blogger and journalist, Mehdi Mohseni, we realize that we are listening to Iranians in exile. These young professionals and activists were swept up in the violence, and in (mostly) stoic fashion tell us what they experienced—from capture and imprisonment, to enforced informing, rape and torture—every human rights violation one can imagine.

Iranian authorities have often accused their own human rights lawyers and journalists of colluding with foreign governments to undermine the country’s Islamic government. Just this month, in the 10 January edition of the New York Times, William Yong reports on the Tehran sentencing of Nasrin Sotoudeh to eleven years in jail for “activities against national security” and “propaganda against the regime.” Five years of that sentence are for accusations that she was a founding member of the Defenders of Human Rights Center, an association of lawyers led by the Nobel Peace Prize winner Shirin Ebadi, who left Iran in the aftermath of the disputed 2009 presidential election and subsequent crackdown on opposition figures. Ebadi, who is featured prominently in Ahadi’s film, points out, quite a few times, that human rights violations in Iran continue to be ignored by Europe and the rest of the world. Silence is one thing, but countries like Germany (where the film’s director is based), France and the UK still sign contracts and business treaties with Iran, keeping it financially powerful on the world stage despite now very public knowledge that human rights violations continue unabated.

The Green Wave is an important addition to the growing archive of this vital documentation. The first-hand accounts of arrests, torture, brutality, kidnappings and murders are there, irrevocable, undeniable. They live on Twitter feeds, on Facebook, on YouTube, and now in this film: messages and footage of citizens paying the price for raising their voices, by asking what happened to their votes, for ignoring the directives of their leaders to keep silent.

Towards the end of the film, former UN prosecutor, Dr. Payam Akhavan, talks about the “seismic shift, the democratic tidal wave” that occurred in Iran in 2009. He goes on to say, “It’s very hard to imagine that this systematic, wide spread violence against thousands and thousands of protesters, this use of rape and torture against thousands and thousands of victims, is done without the acquiescence, if not the express instructions of those in positions of authority… Today, it may not be possible to bring these people to justice. But we know from history, that those who are in power today may not be in power tomorrow. And the leaders of Iran today have to think about the consequences of their actions. They have to understand that their crimes are being documented, are being recorded, and a day will come when they have to answer.”