FILMS OF SHIRLEY CLARKE, THE

(The Films of Shirley Clarke screens at Anthology Film Archives from April 22nd-28th, 2009. If you’re not able to attend, you can purchase the DVD set Treasures IV: American Avant-Garde Film, 1947-1986 at Amazon, which includes Clarke’s 1958 film Bridges-Go-Round.)

“There’s a dissatisfaction with merely going to the movies,” proclaims Shirley Clarke in Noël Burch and Andre S. Labarthe’s documentary Rome Burns: A Portrait of Shirley Clarke (1970). Throughout, she is never without two things: a cigarette between her lips, and a sincere humility. Seated on the floor of a Parisian apartment with friends and colleagues (including Jacques Rivette and Yoko Ono), the New York-native Clarke opens up about her revolutionary ideas about cinema, as well as her own misgivings about her earlier works. The three features she had shot at that point—The Connection (1962), The Cool World (1964), and Portrait of Jason (1967)—wrenched burgeoning cinema verite trends in new, groundbreaking directions. But for every liberating frame that passed through her camera, Clarke saw more work that needed to be done. To her, the then-current relationship between the audience and the movie was antiquated: “I don’t want them separated by the screen anymore.” In fusing experimental, documentary, and narrative film techniques, Clarke was a significant force in creating “modern” cinema in the 1960s.

Anthology Film Archives’ retrospective The Films of Shirley Clarke does more than pay tribute to her career as a filmmaker, which spanned from the 1950s through the 1980s: it also chronicles the larger evolution of independent filmmaking in America. From formalist shorts to naturalist features and Academy Award-winning docs to experimental video collaborations, Clarke pushed the boundaries of what it meant to be an independent filmmaker. Nor is Clarke’s “art” limited to just her movies—she was also co-founder of The Film-Makers’ Distribution Center; the Teepee Video Space Troupe (based out of her Chelsea Hotel home/studio); and The Film-Makers’ Cooperative, which continues to be a significant part of the film community after 40 years. As much as her films, these organizations constitute an undeniable part of her mission to forge a new symbiotic relationship between the audience and the movie.

Born in New York in 1919, Clarke first studied modern dance before turning to filmmaking in the early 1950s. Clarke’s earliest films show the influence of another pioneering female filmmaker, Maya Deren, who similarly had a background in dance. One can see traces of Deren’s A Study in Choreography for Camera (1945) and Meditation on Violence (1948) in Clarke’s Dance in the Sun (1953) and Moment in Love (1956), particularly in the use of fluid body movement across a cut that changes background but preserves the continuity of action on-screen. But whereas Deren’s films occupied psychological performance spaces, Clarke’s are far more rooted in reality: whether a naked rehearsal hall, a sandy beach, or even a reflection in a nearby stream, the physical reality of space is a clear concern. 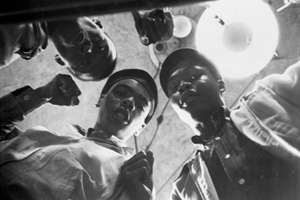 Around this time, Clarke began studying with famed avant-garde filmmaker Hans Richter, whose influence can be felt in the abstract, double-exposed cityscapes of Clarke’s Bridges-Go-Round (1958). Clarke commissioned two scores for the film—one an electronic piece by Louis and Bebe Barron, and the other a jazz score by famed composer/arranger Teo Macero (responsible for the marvelous orchestration on Miles Davis’ Sketches of Spain). This integration of modern music into Clarke’s cinematic world would become an essential part of her style, particularly in her next film, The Connection.

There was little hope that Bosley Crowther, the un-hip, curmudgeonly film critic of The New York Times from 1940-1967, would ever “get” The Connection. Upon its initial release he wrote, “There is little about it to warrant the clamorous interest of the average moviegoer or to distinguish it as a significant piece of cinematic art.” A relic of the past, Crowther’s taste for middle-of-the-road, unadventurous mediocrity is exactly what Clarke was fighting against. An adaptation of Jack Gelber’s stage play of the same name and originally produced by The Living Theater, The Connection watches as a group of junkies sit around an apartment waiting for their dealer to show up. Some play solitaire, some walk in circles, while others pick up instruments (such as jazz legend Jackie McLean) to pass the time. But to Clarke, more important than “who” is waiting is the “who” is watching. In this case, it is a “square” documentary filmmaker who is continually pulled into the shot by his subjects. They chide him for purporting to make a “factual” film about drug addiction without ever having experienced it himself.

Herein lies one of Clarke’s reoccurring concerns: how much truth can cinema verite, whether as a documentary approach or narrative stylization, convey? What are the limits of the lens? Innately skeptical of cinema, Clarke may be making a film about junkies, but she has no intention of “showing” her characters off to the audience like some sideshow attraction. Even the fictional director in The Connection was forced to confront this issue: “The minute I put a camera on you,” he tells his subjects, “you change!” Of her own style, Clarke has remarked, “The very thing that was trying to be hidden is now trying to be exposed.” By revealing the filmmaking process, she allows her characters to retain their dignity, as well as an element of mystery—the tantalizing suggestion that beyond the view of the camera there is something secret and sacred that cannot be broken down into shots and dialogue, something horrific that shouldn’t be made light of.

While Clarke has slighted The Connection for being too “slick” (“Unfortunately, the cameraman’s reputation was at stake,” she explained), her next film was an even deeper foray into realism. From first frame to last, The Cool World is an indictment against Hollywood make-believe. Fueled by Dizzy Gillespie and Yuseff Lateef’s jazz score, it is an unrelenting portrait of youths who battle against a world that offers neither pity nor possibility. Consider the scene in which a white professor leads a disorderly group of black teenagers on a bus tour through Manhattan, pointing out “landmarks” such as Bergdorf Goodman, The Plaza, and the Public Library—sterile, iconic images that “translate” as “New York City” in countless Hollywood productions. But in Clarke’s movie, there is no oohing and ahhhing—just a cacophony of disinterested teenagers to whom these locales are but a fantasyland. 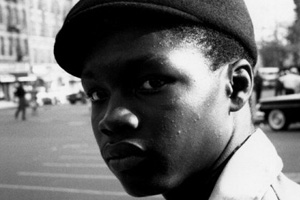 The Cool World is a Rebel Without a Cause (1955) for a new era. Instead of a violently sensitive Jim Stark (James Dean) confused by out-dated social mores, we have Duke (a ferocious Hampton Clanton, in one of his only film roles), a teenage drug dealer and warlord for his gang, The Pythons. And unlike Jim, Duke certainly does have a cause: he dreams of having his own gun, and having people say as he passes, “There goes Duke, he’s a real cold killer.” The first film shot on-location in Harlem, The Cool World has a special documentary value that lies beyond its fictional narrative (coincidentally, it was produced by a then-unknown Frederick Wiseman). Clarke has a real feeling for the natural movement of the human body, whether it is the unbridled ecstasy of a street preacher or a rumble between local gangs, or the quotidian gestures of passing pedestrians.

Once again, leave it to Bosley Crowther to say exactly the wrong thing (or, maybe it is the “right” thing for an old dinosaur like him to say): “The attitude in which [Clarke] functions as a recorder is that of the outsider looking in.” Looking back, The Cool World seems as unprecedented as John Cassavetes’ Shadows (1959), or even Roberto Rossellini’s Open City (1945). Three years before Katherine Houghton brought Sidney Poitier home in Stanley Kramer’s “topical” Guess Who’s Coming To Dinner (1967), Clarke gave us Duke—a modern incarnation of Richard Wright’s Bigger Thomas from Native Son (1940), who fights not on the anesthetized battle(play)ground of Hollywood, but in a harsh, unforgiving asphalt jungle. Completely lacking in moralizing or judgment, 45 years have not tamed the film one bit.

Clarke moved from the macro to the micro for her next film, Portrait of Jason (1967). Making full use of her understanding of bodily movement, theatricality, and non-judgmental observation, she recorded a 12-hour interview with a man whom it would be too simple to call just “a black, homosexual prostitute.” Edited down to 105 minutes, what expands on-screen is as much a study in personality as it is in cultural politics. Tom Sutpen at Bright Lights Film Journal has best described the indescribable nature of the film: “One possible explanation for the persistent unavailability…of a film so exceptional has been its unusual way of eluding all categorization. It isn’t a documentary, really; it isn’t even a ‘cinema verite’ exercise… If Portrait of Jason is anything we can give a name to, it is a record of a performance, a performance ably assisted by a filmmaker who most assuredly knew what, and who, she was filming.”

“If you critique what goes on in the world,” Clarke said, “you are also critiquing the media.” This goes back to how she didn’t want to use the screen to separate the audience from the movie. They exist in the same world—it’s not that one merely reflects the other, but that they exchange glances in a revolving circle. Shirley Clarke didn’t just tackle social relevant topics—she approached them in a way that was fittingly progressive. Each of her first three features focused on increasingly marginalized characters whose stories had either been misrepresented, overly simplified, or outright ignored by mainstream cinema. And her cinematic approach continued to grow out of her quest to redefine “realism” without distorting stylizations—first there was the meta-verite of The Connection, then the gritty naturalism of The Cool World, and finally the unabashed frankness of Portrait of Jason.Individually, they are all solid films that can stand on their own merits. Together, they form a trilogy that points the way for films like Killer of Sheep (1977) that were to come in the next decade. And in the context of Shirley Clarke’s own filmography (which includes such diverse films not discussed here as the Oscar-winning Robert Frost: A Lover’s Quarrel with the World [1963] and Ornette: Made in America [1985] which is as fittingly experimental as its subject, free jazz pioneer Ornette Coleman), they remind us that Shirley Clarke was more than just a visionary filmmaker. She was a rebel with a cause, one whose impact on filmmaking is still being felt 12 years after her passing in 1997, and will continue to resound loudly for many years to come.

FILM FESTIVALS
On the Festival Circuit
People We Love
SLIDESHOW

Day One of the TIFF Industry Conference