Fb. In. Tw. Be.
Documentary
On DVD

(Surfwise is now available on DVD. Buy it at Amazon

For some reason, my critical teeth are less sharp when it comes to watching documentaries. If a narrative film has great subject matter at its core but is poorly executed, poorness wins. On the other side of that viewfinder, if a documentary has great subject matter—or, more importantly, great content—but is executed with lazy imprecision, great subject matter wins. I’m not talking about flat-out bad films. I’m referring to those middle-of-the-road works that have the potential for greatness but are held back by being too technically or tonally or rhythmically off-the-mark. When that happens in a narrative film, I am almost always distracted into disappointment. When it happens in a documentary, I am less bothered. My critical bird’s eye view disappears and I forget about things like editing and cinematography and instead get lost in the moment.

Doug Pray’s Surfwise does not belong to the ‘lazy imprecision’ camp. Pray is an extremely talented filmmaker, and Surfwise confirms that with ninety minutes of dazzlingly well-woven, jam-packed storytelling. But I cannot deny that while watching it, I felt my inner narrative critic clearing his obnoxious, nagging throat. For the middle act of the story, aka “the downswing before the upswing,” ventured into some truly disturbing and complicated waters (pun intended, badda bing), and no bouncy music or clever animation or happy resolution could erase those negative feelings. From the dark turn midway through until the end, I felt like I was watching two different movies at once, and it bothered me. Which isn’t to say that I wouldn’t recommend Surfwise, for I am here to do just that. I just want to stress that this wasn’t an uplifting experience for me, contrary to what I had imagined it would be.

Surfwise tells the story of Dorian “Doc” Paskowitz, a proudly Jewish, defiant force of a man who abandoned a life of normalcy and doctorhood to take his wife and nine children on an endless surfing journey in a 24-foot long camper in the 1960s and 1970s. Along the way, he fed the children like monks, kept them isolated from the outside world, and didn’t give them any education outside of their ritualistic, simplified daily grind. We discover, through present day interviews with these ultimately well-adjusted children-turned-adults, that this upbringing left deep emotional scars. So much so that they haven’t seen their parents in years. In one chilling scene, David talks, then sings, his way through a hateful song he recorded about his controlling, demanding father. By the end, tears are streaming down his face, literal scars that show how damaged he truly is. 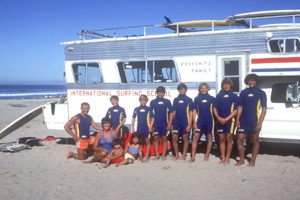 Eventually—was this change of heart inspired by Pray’s camera? does it matter if it was?—all nine children agree to return to Hawaii for a family reunion. When the last child, Izzy, arrives, he is met with hugs by his crying, shaken mother. And that’s when it hit me. What about the mother? What about Juliette? She’s interviewed, yes, and she speaks fondly enough of the life she and her husband chose (or should I say her husband chose), but that hug and those tears belie a much deeper, hidden pain. Her children haven’t been avoiding her; they’ve been avoiding him. He is the cause of their disconnection. He is the one that raised them so brutally (even he, this arrogant, stubborn man, admits that he was wrong). Yet Juliette has been forced to live without seeing her circle of hands completed. To her children’s credit, they appear to have adapted and adjusted to their adult lives, and even though Pray ends the film on a happy note and uses music throughout that is supposed to keep our spirits high, David’s song, venomously spat into the camera, and Juliette’s hug, loaded with so many years of separation, prevent me from feeling anything but disdain.

I didn’t see Surfwise at a festival or during its theatrical run, and while I also didn’t read much about it back then, my memory is that it was pitched as an ‘inspiring story!’ about a ‘truly original family!’ But having watched it in light of its recent DVD release, I became confused. Maybe I’d been mistaken and had simply made that up, for the film that I watched disturbed and angered me. To find out the truth, I went to the official website and perused many reviews. My memory was right. Everyone appears to have found Doc charming and his unflinching spirit admirable. To me, he was evil, cruel, stubborn, and unyielding, an authority figure at his most corrupt. It riles me up just to think about it. (I guess here is where I should also point out that I have the most loving and supportive father imaginable, so that explanation doesn’t fly.)

Surfwise struck a dark chord within me, and I’m surprised that my reaction hasn’t been corroborated elsewhere (maybe I didn’t do enough homework). In some ways, I think Pray’s general glaze of soft-coated optimism creates a more interesting final product, allowing for viewers to process it differently. But I can’t deny that the voice inside me, which usually takes documentaries such as these for what they are instead of what they’re not, would have preferred if Pray had shone the spotlight on Juliette, the woman who appears to be the true sufferer in this complicated family saga.