Documentary
Foreign
On Television
On the Festival Circuit
Short Film

When 55-year-old Salim Muhammad pushes his cart down the streets of Kolkata, India, children flock to it. But it isn’t just children. Everyone is mesmerized by Salim and his cart, as if he were an ice cream man handing out free frozen treats on a scorching summer day. Only this cart doesn’t contain food or candy. It holds something much more powerful than that behind its black drapes. It holds the magic of cinema.

Since the age of ten, Salim has devoted his life to bringing moving images and sounds to the people of his country. He inherited a hand-cranked film projector from his father, and to this day, that is the machine upon which he makes customers’ dreams come true. Pushing the cart through the streets with his own children by his side (who appear destined to continue the tradition once he retires), Salim is a cinematic pied piper, a figure whose mere presence causes people to forget their worries and escape from one reality into another, far more colorful and melodious one. 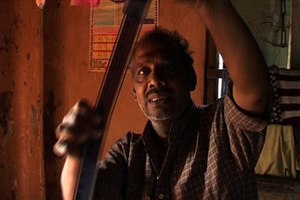 With Salim Baba, Tim Sternberg crystallizes what makes cinema such a paradoxically beautiful thing (and in only fourteen minutes, at that, adding to the film’s refreshment). For such an inarguably artificial craft—especially when considering its basic projection elements, which have more in common with a sewing machine or a lawnmower—the final result becomes even more glorious, a fully formed world that emerges on screen, against all likely odds. While every form of projection is mechanical in some way, Salim’s nearly archaic set-up—the hand-cranked projector, the converted lens that is usually used for palm reading—provides an even more jarring contrast between the nuts-and-bolts of the projector itself and the creative, magical life that very same projector ignites.

At first, it’s almost humorous to realize that Salim is projecting film scraps that he himself has edited together. But when one learns of the care taken in his unique juxtapositions of images and music, a new appreciation emerges. For Salim is not merely an exhibitor, he is a filmmaker in his own right. The way he talks about movies and their typical structures further establishes his knowledge of, and love for, his profession. There can be no denying that Salim Muhammad is a full-fledged cinephile. And while he may be a fan of older films, he recognizes that the world is changing. To compromise, he lets his son edit the newer reels so as not to get completely lost in the shuffle.

It’s no wonder that Salim Baba was nominated for a 2008 Academy Award for Best Documentary Short Subject. It is a beautifully composed work that is more than just a striking portrait of one man and his commitment to his lifelong calling. In showing Salim piecing together strips of film and pushing his makeshift cart into the streets, where children fight for space behind those hallowed black drapes as his son cranks the projector in order to bring that two-dimensional world to three-dimensional life, Sternberg and his collaborators have captured the essence of what makes cinema such an inexpressibly wondrous thing.

(Salim Baba was acquired by HBO Documentary Films. Visit the film’s official website for more details and for a link to its television screening schedule.)

FREEDOM FOR THE WOLF