(Objectified opens on Friday, May 8th, at the IFC Center. Visit the film’s official site to learn more, especially with regards to upcoming screenings.)

In the same way that Gary Hustwit’s Helvetica sounded like one of the more excruciatingly un-cinematic concepts for a feature-length documentary, so too does Hustwit’s follow-up Objectified. But for someone such as myself, whose mind was genuinely opened by Helvetica’s engaging exploration into the world of… yes, it’s true… fonts, the idea of Objectified actually becomes somewhat enticing. Two years after having seen Helvetica, it continues to influence the way I perceive the world (that is not, in fact, an overstatement). While it has only been two weeks since I’ve seen Objectified, I feel strongly that Hustwit’s companion piece is also going to leave a long-lasting mark on my brain. It’s become a cliché to say it, but in this case, it’s true: Objectified has made me see the world differently, through more widely opened eyes.

As the title implies, Hustwit’s latest film investigates the role that manufactured objects play in our daily lives. By “manufactured objects,” he means pretty much everything you’re looking at right now. To establish the imposing massiveness of that concept, Hustwit breaks down a typical morning routine (I am expanding on the film’s content ever so slightly): awakened by an alarm clock or cell phone; a visit to the bathroom sink to brush one’s teeth with a toothbrush and, if needed, insert contact lenses; then, into the kitchen to put coffee in a coffee pot and fry some eggs in a pan on a stove and put bread in a toaster; when it’s ready, it’s over to the kitchen table to eat that breakfast on plates with knives and forks; if a mess is made, a paper towel from the paper towel rack to wipe it up. Granted, if one were to look at the world in this hyper-perceptive way, there would be more car accidents and dazed bodies staring cryptically at objects and not very much would get done. But for those individuals who can’t help but see the world through this prism, there is a job that allows them to pursue their obsession. Lucky for them—and us. 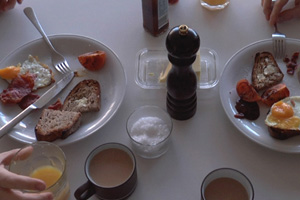 Hustwit travels the globe—from California to Minnesota to New York City to Germany to Holland to France to Japan—to interview some of the world’s most notable industrial designers (as I have no knowledge of this scene, I will have to take Hustwit’s word for it). And though I’m not trying to start a battle here, the typeface designers in Helvetica make the subjects in Objectified look like ultra-cool rock stars. Apple’s Jonathan Ive comes off like a brainy Jason Statham; his enthusiasm for his job is infectious, and it goes a long way to explaining the undeniable aesthetic appeal of Apple products. In Paris, brothers Ronan and Erwan Bourroullec have opposing personalities, yet they complement each other quite well. Australian ex-pat Mark Newson, who splits his time between London and Paris, might have a little too much rock star in him. Yet by showing us these individuals and many, many more, Hustwit isn’t out to simply “make design cool.” Each of them has something interesting and worthwhile to say about our relation to the objects that permeate our lives.

Hustwit takes the same precise care towards his visual and aural presentation as his subjects do with their jobs. This only reinforces the film’s content and enhances the overall effect. While he finds a steady groove and sticks to it—in many ways, Objectified plays like an accumulation of short films that add up to one unified whole—this seems like an appropriate enough way to play it. I like the idea of Hustwit churning out these documentaries every two years and combining them into one long film when he finally decides to call it quits, naming it HelveticaObjectifiedArchitecturaTransportableAndOnAndOnAndOn.

Personally, I am horrendously guilty of taking the objects in my life for granted, of not being as aware of my surroundings as I should be. Which is why Objectified provides such a pleasant wake-up jolt. Why can’t high school or college classes be this stimulating and fun? Gary Hustwit doesn’t make films to merely entertain, and he doesn’t make them to simply educate either. He’s here to ask questions about the world in which we live, and in turn inspire us to think more creatively and clearly. He’s found his very own special niche.