. Visit the WORK series website to see the film’s trailer.)

It’s hard enough getting by as a full-time musician in any genre these days, but try doing it when you’re an experimental, improvisational jazz artist. In many ways, Chicago’s Ken Vandermark is succeeding, but it isn’t easy. Touring small clubs and establishments two-thirds of the year, struggling to pay the bills, spending the rest of his free time writing and composing music even he admits is incredibly demanding, Vandermark’s life is a sobering lesson in commitment and dedication. For those out there who think being a musician is an exciting job, Daniel Kraus’s Musician is here to tell you otherwise.

The second installment in Kraus’s Frederick Wiseman-esque WORK Series is another matter-of-fact document of an American worker (the first was Sheriff) that shows, with subtle grace, the day-to-day realities of an individual trudging through their chosen vocation. Kraus is shooting each film in his series using a similar stripped-down approach (no voice-overs, no scores, nothing fancy), but when it comes to Vandermark, this style is especially appropriate. A recipient of the MacArthur Genius Grant in 1999, Vandermark lives his life with a work hard, work harder attitude that leaves him little time to relax. And when he’s relaxing, it’s clear that his brain is still occupied. For Vandermark, making music isn’t just a job. It’s everything. 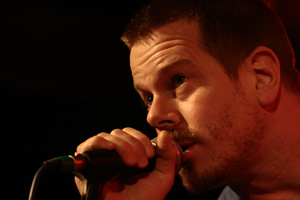 For many viewers, Kraus’s decision to give as much screen time to the mundane duties of Vandermark’s profession—answering phone calls, booking shows, transporting equipment—will feel like a letdown. But with the WORK series, Kraus isn’t out to make the broad, lazy point that all jobs suck. He simply wants to document each vocation as honestly as possible, without manipulating the footage to make things seem better or worse than they really are. To that end, in Musician, he shows us Vandermark in his element, performing his sonic assaults to appreciative viewers in various cities all across the world, and while the crowds are undoubtedly small, the response is passionate. He doesn’t show us too much on-stage footage, for that, too, would be dishonest. A day is twenty-four hours long. A set is only one or two.

Kraus ends Musician on an ambiguously high note, with Vandermark playing an electrifying saxophone solo. As if reflecting the solitude of this lonely artist, Kraus slowly zooms out his camera, until Vandermark has become smaller and smaller. But the performance remains electrifying, and when the last note is played, he awakens from his furious state and acknowledges his audience, who reward him with a standing ovation. This worker has done his job.

MILES DAVIS: BIRTH OF THE COOL