30 for 30
Documentary
On Television
Sports

(Part of its new 30 For 30 series, Muhammad and Larry premieres on ESPN tonight—Tuesday, October 27th, 2009—at 8pm, followed by more airings on various ESPN channels over the next few months. Go here for details.)

One thing struck me while watching Albert Maysles and Bradley Kaplan’s Muhammad and Larry: those names should have been switched around in the title. For while Muhammad Ali shares as much air time with Larry Holmes in this recounting of the 1980 fight between the former friends and sparring partners, and while the film depicts Ali’s tragically sad downfall from God to Man, it stands proudest as a sweet tribute to the oft-forgotten Holmes, one of the most successful heavyweight champs in history, yet whose quiet lifestyle and low-key demeanor has consistently relegated him to the margins. 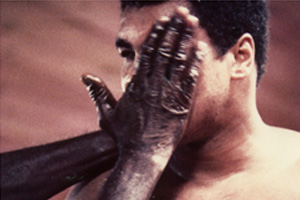 The film’s ace-in-the-hole is archival footage that the Maysles brothers shot (on 16mm, hooray!) in the weeks leading up to that showdown. In hindsight, that footage becomes even sadder, for everyone knows—and if you don’t, Maysles and Kaplan tell you at the very beginning of the hour-long film so I’m not spoiling anything here—Ali went down, and he went down hard (though the miracle is that, for all of the pounding that he took, he never actually went down). At the time of training, everyone around him had rising concerns, but all it took was one glance in the mirror and Ali’s confidence was restored; he was invincible. But the truth was that he simply wasn’t the same fighter that he used to be, and even if his age wasn’t a fate-sealing factor, when a doctor poorly diagnosed Ali with a thyroid condition and put him on medication that slowed him down even more, that did the trick. It was a prescription for disaster.

And it was a disaster. But for the boxer who was delivering the punishment, the subsequent demolition provided its own inner conflict. In interviews shot in Holmes’ hometown of Easton, Pennsylvania, where he trained for the fight, Holmes refuses to speak ill of Ali. He exudes an air of quiet humility that seems to contrast greatly with someone of his professional stature, but which makes him all the more endearing. Holmes doesn’t come off as a macho, arrogant brute. He reveals himself to be a committed husband and father with small-town charm and a gracious sense of humor. He also shows a measure of grace by not succumbing to his ego and bragging about the victory that he knows will be his. Yet, in one candid moment, he acknowledges that an aging Ali is still Ali, proving that the Ali mystique wasn’t dead just yet. Holmes was going to have to beat it out of him.

In order to provide better context, Maysles and Kaplan include updated interviews with experts who have the benefit of hindsight to confirm what the past footage implies: this was the beginning of the end for Ali. These reflections turn Muhammad and Larry into something richer than a typical sports documentary. What makes it so sad is that we know Ali is alive today but he’s nowhere to be found in the present-day footage, coupled with the somber realization that everyone is speaking about him as if he’s been gone from us for a long time now. But thankfully Holmes keeps the story afloat. He’s still living in Easton, disappointed in his seemingly forgotten status, but smiling and happy nonetheless. He’s the heart and soul of this little film.

For notable reasons—its length, the fight itself—Muhammad and Larry doesn’t have the epic grandeur of When We Were Kings, but it remains a valuable edition to the boxing cinema canon. None of us like to see our heroes fall from the sky, but in the case of Muhammad and Larry, Maysles and Kaplan remind us of another hero that is still floating up there with a quiet, noble pride.