(Meadowlark is screening at MoMA this weekend: Saturday at 8:15pm and Sunday at 3:45pm. Visit the film’s official website for more information.)

A stunning meditation on the central formative events in his young life, twenty-seven year old Taylor Greeson’s film memoir Meadowlark, a nominee for a 2008 “Best Film Not Playing at a Theater Near You” Gotham Award, is an evocative prairie nocturne, a beautiful retelling of horror and tragedy, a rewarding act of self-actualization rendered powerfully into cinema.

Greeson serenades us in gorgeous 16mm footage of the landscapes, churches and modest family homes of his childhood in Montana and Oklahoma, where he was shuttled between his divorced parents. Using a wealth of family photos, newspaper clippings, as well as the formidable powers of silence and sightlessness, he revisits the events of the summer of 1993. That was when the thirteen year old’s family was destroyed, in no small part by the murder of Greeson’s brother Charlie, who was stabbed to death by Frank Fuhrmann, a man Charlie had been sexually involved with. Taylor, who discovered his own homosexuality that summer by losing his virginity to an older boy, was ordained into the priesthood of the Mormon faith only weeks later, consumed with unreasonable guilt. 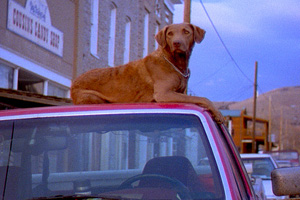 Greeson struggles to come to terms with all of this, as his camera shows us the unadorned tableaus where he discovered his sexuality, the path his brother walked before he was killed, the church in which he aspired to Christian brotherhood, and the irreconcilable paradoxes that these places have engendered within him. He revisits his childhood home and spends time with the family that currently resides there, capturing their tension as he probes them about their thoughts on his families’ troubles. He meditates on his mother, supportive, aging, equally scarred, and his angry ex-lover, who doesn’t want to be portrayed as a child molester in Taylor’s film. He searches for the scattered members of his own clan, while gearing up to interview Fuhrmann, talking to various police officials and the few firsthand witnesses of his brother’s demise.

He pays special attention to the aging infrastructure—the wheat fields, the abandoned buildings—that make up the outskirts of Billings, Montana. A powerful accumulation of the small and mundane moments that take place in the towns where Greeson grew up, the film is a virtual tour of spaces and people that American cinema largely ignores. The film’s making is right there on the surface, Greeson’s narration informing the sumptuous images and imbuing their beauty with unshakeable weight.

While it never attains the clinical police procedural quality of some of Errol Morris’ more investigative features, Greeson’s much more personalized work treads some of the same emotional ground as another infamous true crime tale, A Thin Blue Line; yet the film gains much of its power from his uncanny ability to seem at ease letting us into the most troubled regions of his personal history. His warm palette and use of dainty bluegrass tunes dulls the sharp edges of much of what we’re in store for, allowing us to appreciate the small miracle that Taylor Greeson turned out alright and that the pain he’s willing to share with us can bring some catharsis to those who didn’t.

GARRY WINOGRAND: ALL THINGS ARE PHOTOGRAPHABLE