(Marwencol is now available on DVD

or Blu-ray through Cinema Guild. It opened theatrically on October 8, 2010, at the IFC Center and world premiered at the 2010 South by Southwest Film Festival, where it won the Documentary Grand Jury Prize. Visit the film’s official website to learn more and check out some amazing photographs that will take your breath away.)

SXSW 2010, this is the place! I’d say that this is now the best film festival in America. It’s the perfect synchronicity between a young, open-minded audience and films which tend to lean toward the visionary, personal and iconoclastic. Though there are some, there are very few wannabe Little Miss Sunshine films and even less Hollywood industry voidoids and worthless starlets. It’s all about the films and this year they are stellar. Where once SXSW might have been the default festival for those rejected by Sundance and Tribeca, now we see several films that were courted by Tribeca and instead opted to premiere here. This year it’s clear SXSW has risen to a primary position in this new reconfigured future world of indie. It may in part be due to the confluence of the Interactive Festival that is also here or maybe it’s just that the programmers at SXSW are dialed in and have great taste, but this is for sure one festival not to miss.

I saw my first great film of the festival on the morning of day two. Marwencol is a documentary portrait of an eccentric artist who creates complicated Darger like narratives within a hyper detailed miniature village he calls Marwencol. 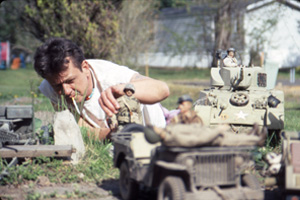 Mark Hogancamp describes himself as a former angry drunk. One night in his regular Kingston NY bar he gets stomped to near death by five young idiots who react violently to something he tells them. After nine days in a coma he is sewn back together but he has little to no memory of his former life. He has to start all over, learning the alphabet while learning to walk and move his hands. Then, his insurance runs out and his medical therapy stops and he is forced out of the hospital. Back at home, he emerses himself into a fictional world of his own creation. He crafts meticulously detailed WWII dolls in 1/16th scale and builds a town for them to act out Mark’s various fantasies and nightmares. He photographs the narratives in single still shots and then throws out the negatives and files the photos in shoe boxes, just as Henry Darger did with his paper roll depictions of the ordeals of his Vivian Girls. 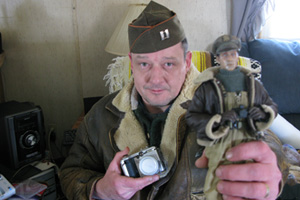 The doc mixes interviews with Mark about his own personal struggles with his detailed explanations of the dolls and their personalities and backgrounds. Many dolls are direct stand-ins for someone in Mark’s life. Love interests, best friends, co-workers and neighbors all have their own alter ego doll. Mark, of course, has his own alter ego and the trials that Mark puts him through reveals an inner life that in reality Mark was hesitant to face. As the film progresses, we become more and more curious about the strange sexual dynamics in Marwencol (the Barbie doll women are extremely aggressive, sexy and all have dazziling outfits as well as amazing knife and fighting skills). The hyper sexualized world of Marwencol eventually links to the reason why Mark was beaten that tragic night and moves us into an even more exciting third act wherein Mark decides to take his world and inner self public for an art exhibit in ‘bohemian Greenwich Village.’

Beyond being a hyper engaging narrative on several levels, the film really allows the key questions about art and reality to emerge. Can art/fiction be more ‘real’ than ‘reality”? Can art heal, both the creator and viewer? What role should the public/commerce play in the life of an artist? Marwencol has it all. It is an emotional, unsentimental tale that is both laugh out loud funny and intellectually engaging and at the same time it’s all TRUE! This will be the film to beat for awards. It will also be one of the most talked about docs of next season. (UPDATE: Marwencol did, in fact, win the Jury Award for Best Documentary Feature at the 2010 SXSW Film Festival.)