JOAN RIVERS: A PIECE OF WORK

(Joan Rivers: A Piece of Work is now available on DVD

and Blu-ray through IFC Films. It opened theatrically in New York City and Los Angeles on Friday, June 11, 2010, before spreading to more cities in the following weeks. Eventually, it will become available On Demand. Visit the film’s official website to learn more.)

No matter what you think of Joan Rivers—obnoxious, groundbreaking, hilarious, annoying, piercingly honest, grotesquely plastic—Ricki Stern and Annie Sundberg’s documentary is sure to make you see her in a different light. At the very least, you’ll never doubt her devotion to her profession ever again. While it might sound strange to compare Stern and Sundberg’s portrait of the tireless comedienne to Joe Berlinger and Bruce Sinofsky’s Metallica: Some Kind Of Monster, I had an oddly similar reaction watching both of these films. Stern and Sundberg pull off a feat similar to Berlinger and Sinofsky, in that they present sides of their subject that make you want to dismiss and judge Rivers, even as you find your admiration for her growing. 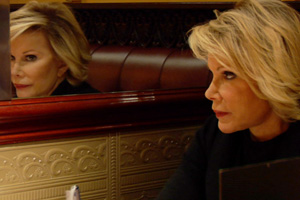 Before I continue, I must cut things short with a full disclosure: I am thanked in the closing credits of this film, as I watched a very early cut of it and gave feedback to the filmmakers. At the time, a good movie was already in there, yet there was still much work to be done. I trusted that Stern, Sundberg, and editor Penelope Falk would get it where it needed to be. When I finally saw the finished version recently, it was even better than I expected. However, lest you think I am overly biased and too closely connected to the material, and rather than risking an outright dismissal because of this admission—I had hoped to assign another writer to review it but that didn’t work out—I would instead like to point you in the direction of four outside reviewers who don’t carry my baggage, but who nonetheless share my enthusiasm. If you don’t believe me, believe them: