HOLD ME TIGHT, LET ME GO

(For those of you who haven’t seen Kim Longinotto’s Hold Me Tight, Let Me Go, you’re in for a real treat, as it makes its American television debut on Tuesday, July 28th, as part of PBS’ POV series. Visit the film’s page at the POV site, or buy a DVD for $29.95 through the film’s distributor, Women Make Movies. ***For a short time, watch it for free online right here!***)

Although Kim Longinotto is too respectful, patient, and kind a filmmaker to say it out loud, there is a glaring lesson to be learned from Hold Me Tight, Let Me Go. That lesson is, quite emphatically: PARENTS, IF YOU AREN’T GOING TO LOVE YOUR CHILDREN, THEN DON’T F-CKING MAKE THEM. Longinotto’s arrestingly powerful verite portrait of life at England’s Mulberry Bush School follows a group of devoted teachers who care for youngsters who have suffered extreme emotional traumas. Longinotto’s rare blessing as a filmmaker is on full display in Hold Me Tight, Let Me Go, as she inserts herself into another unspeakably difficult situation, films it with a hands-off level of remove, and yet still somehow manages to grace that footage with an overriding air of benevolence. When it comes to the art and craft of observational cinema, Kim Longinotto is just about peerless.

Very early on, we watch as two adults question an eight-year-old boy, Alex, who is distracting himself by playing in a coat closet like the child that he is. When they ask Alex what he did to another teacher earlier that morning, his accent and shuffling about make it difficult to discern his answer. For this innocent little boy surely couldn’t have said the c-word (as in, “I kicked her in the c-nt”). But that’s exactly what he said. Longinotto uses this moment to jar viewers to attention and make us realize what these brave teachers are up against—and what we’re in for.

It doesn’t seem possible, but this coarse language is the most inoffensive weapon these children have in their arsenals. Fists are wielded, weapons branded, and, when their limbs are held down, spit is hawked into the faces of their patient teachers who try to calm them down. The standard procedure at Mulberry Bush School, which was founded in 1948 by psychologist Barbara Dockar-Drysdale, is to simply hold the child until their fit subsides, reacting with as much patience and nonchalance as possible. While this is probably the safest measure to take, it only increases the child’s fury at the time. 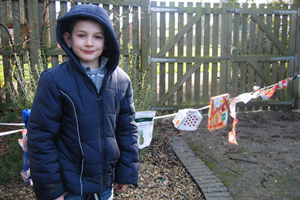 For this particular project, Longinotto followed a select group of children between the ages of eight and twelve over the course of one school year. This is a relatively long shoot for Longinotto, who prefers to work in shorter bursts, as the situations she finds herself in can be emotionally taxing (understatement of the year?). Here, we get to know a few of these kids as they go through their daily routines: twelve-year-old Michael is on the cusp of graduating, nine-year-old Charlie has just arrived, and eight-year-old best friends Alex and Ben play so hard that they make each other bleed. As the film unfolds, intermittent scenes of playful downtime shift from breezy moments of respite to genuine tension builders, as we realize it’s only a matter of time before it’s going to get messy once again.

One scene addresses the problem particularly—and painfully—well. An entire classroom has devolved into a full-scale riot. As all hell breaks loose, these children no longer appear to be children. They’re like short-circuiting monsters, reacting the only way they know how, by lashing out with aimless fury. Here is where the true gravity of their predicament emerges. Age-wise, they are closer to infants than adults; the behavior exhibited in this scene confirms that. But though these children are capable of speaking—and what foul things they know how to say—they are too young to understand where their deep inner pain is coming from, and they are too damaged to know what to do about it. Like a screaming baby with a fever, they only know that something is terribly, terribly wrong. As we see in scene after scene after scene, that something would be the absence of parental love and devotion.

For anyone who thinks children aren’t shaped by their surroundings to the point of blatant mimicry, Hold Me Tight, Let Me Go is exhibits A-Z and the absolute end of that discussion. Take Ben, who has just tried to stab a fellow student. Later, he has calmed down and is speaking to a male teacher, who asks him what he’s so upset about. At this point, he acknowledges his concern about the camera crew (one of the few times the camera/subject line is crossed). The teacher tells him that there might be a little boy or girl who watches this footage and will be helped by what Ben has to say. After a moment, he concedes, silently whispering, “Cuz my mum stabbed my dad.” End. Of. That. Discussion.

For being an English filmmaker, Longinotto has spent most of her time in other countries—Japan, Iran, South Africa—documenting, with an attentive, observational, yet remarkably warm eye, the plight of women who are fighting, pebble by pebble, to stand up for those who can’t stand up for themselves. In Hold Me Tight, Let Me Go, she returns to her native land to show a group of both men and women who are committed to making the world a better place. One hopes the parents—more pointedly, fathers—of these aggrieved children will see this film and wake up from their pathetic, irresponsible, shameful slumbers.