I was a precocious teenager. I look back over my own High School years, years spent worrying over my grades, joining as many clubs and activities as I could in order not to be bored silly, and I have to admit, I was a smart-ass kid who thought he knew everything there was to know. There is something about the desire for academic achievement that inspires young people, kids not yet blessed with enough life experience to know any better, to try the roles of adulthood on for size, to ape the activities of the adult world, often without the real-life consequences that plague adult decision-making. On one hand, the teenage years should be a fruitful, transitional preparation for adulthood. On the other, there is something a little bit haunting about watching teenagers apply the same gravity and self-seriousness to each new experience that adults tend to apply to their own problems. All of which is to say, if you’re looking for the place where disingenuousness leaps out of the starting gate, where striving politicians learn the rules of the game by feigning concern, you need not look any further than your local High School Student Government.

In Caroline Suh’s entertaining and thought-provoking documentary Frontrunners, the fundamental principals of the American democratic process are on full display. Suh follows the campaign for Student Council President at Stuyvesant High, one of the top schools for gifted students in New York City. You think your kid is smart? Try getting her into Stuyvesant; Only 3% of the 25,000 applicants to the school are accepted. In this competitive environment, it should come as no surprise that the candidates for President have gleaned the hard-won lessons of national political campaigns: the importance of grassroots campaigning, backroom deals, the endorsement of the local newspaper and, of course, of looking good on a televised debate. After a primary process leaves voters with the choice between two final candidates, the popular, hard-working actress Hannah Freiman and the hilarious, philosophical rapscallion George Zisiadis, the audience is left to the realization that, for us as for the students, it all comes down to that most primal of democratic questions: who are you voting for and why? 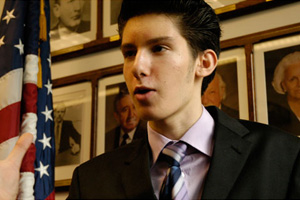 It is how Frontrunners lets us answer that question that provides the biggest surprise. The film operates on two important levels, both of which tell us all we need to know about the state of our democracy. First, the film presents us with a field of candidates, each of whom we implicitly support because we recognize that they are kids, that we would like to see each of them have the opportunity to succeed and reach their goal of becoming a leader. There is something inside of us that loves a leader, that is inspired by seeing someone seek the office. We don’t question the office, we merely judge those who seek it. Second, when we are left with the choice between Hannah and George, it’s surprising how both candidates tickle a different part of the American dream. Suh could have easily divided her audience into two camps, but instead, the impulse to root for both finalists becomes overwhelming. All of a sudden, we’re undecided, able to experience that rare feeling of being unsure who we prefer. One candidate, Hannah Freiman, sees the campaign as a way to satisfy her own ambitions and those of her parents, all of it an authentic response to her interest in public life. The other candidate is George Zisiadis, a walking thesaurus from Queens who spends his time in school by setting up a therapeutic space behind a bed sheet near his locker and his time outside of class winning bowling championships.

In a lot of ways, George’s pandering (free candy!), well-run campaign is an expression of the natural cynicism we all feel toward political life. While George works as hard as he can to overcome Hannah’s advantage as a popular member of the Cheerleading team and the Drama Club, handing out fliers and making promises to his peers that he will clearly never keep, the film conveys an unavoidable feeling that the con is on. At the same time, George’s insincerity and strategic choices are undermined by his hard work and dedication to his campaign. The conflict is perfectly captured as George spends yet another morning shaking hands and handing out fliers to a wildly apathetic student body while playing The Who’s “Baba O’Reilly” (“Teenage wasteland… They’re all wasted!”) on his boom box. It is an essential moment that connects the dots between our distrust and distaste for politicians and our unspoken understanding that their cynicism says as much about us as it does about them.

The timing for Frontrunners couldn’t be better; night after night, Americans are glued to the twenty-four hour news cycle as the nation looks to elect its next President. No corrective to the current political climate, Frontrunners instead provides a unique perspective on our shared political life, on the ways in which the tropes of our public experience can produce unexpected results when refracted through the lens of youth. It is a vital movie, funny and heartening, and one from which any citizen serious about the nature of American character can learn something. From the mouths of babes…

(Frontrunners is now screening in New York City at the Film Forum and will be expanding throughout the country in the coming weeks. Visit the film’s official website for more information.)