(Defamation has been picked up for distribution by First Run Features. It screens back-to-back at the Tribeca Film Festival and Hot Docs before moving onward. Visit the film’s official site for more information.)

Israeli filmmaker Yoav Shamir’s Defamation makes its debut here in the States at the Tribeca Film Festival close upon the heels of Yom HaShoah (Holocaust Remembrance Day). Before watching it at the Thessaloniki Documentary Film Festival, I spoke with one of the co-producers. The film is an Austrian/Danish/Israeli/American co-production and, according to her, they were not easy bedfellows some of the time because of the subject matter with which they were dealing. She wondered, with a bit of trepidation, how it might fare with an American Jewish audience. After having watched it, I understood why she would be concerned.

I had a bit of trepidation as well before seeing it, for reasons similar to the ones Shamir had about making it: namely, that as a secular Jew growing up in the shadow of Hollywood (which my “forefathers founded”), anti-Semitism had never really played any kind of significant role in my life; I knew it was there, of course, because with every Jewish education, or indoctrination, comes the revelation of persecution and hatred; but I had never experienced it on any profound level in my daily life.

Nor had Shamir, really, a man born and raised in Israel who read about anti-Semitism in the local papers nearly every day. The word defamation is generally defined as a false statement that injures a person’s reputation, exposing him or her to public contempt, hatred, ridicule, or condemnation. If the false statement is published in print or through broadcast media, it is called libel. If it is only spoken, it is called slander. Shamir’s film, interestingly enough, focuses more on the slander that Jews perpetrate on one another more than on defamation from the usual suspects. In fact, the genesis of this film was in response to the filmmaker being called an anti-Semite by a Jewish American journalist for expressing critical views on Israel’s policies toward the Palestinians in a previous film he made called Checkpoint. This issue comes full circle, as it must, in this film as well.

Unfortunately, the first part of Defamation is very shaky due to a propensity for hyper-self-conscious exposition (“Now I’m going here to talk to this person; now I’m going over here to shoot that, blah, blah, blah”) and the inclusion of dopey, derivative music, which made me clench my teeth. This beginning didn’t set a confident tone that I was about to see an exceedingly intelligent film—which is what Defamation is. For what ultimately transpires in the course of this mega-journey made the hairs on the back of my neck stand on end. As Shamir rockets around the planet talking to Israelis, Americans, Russians, and Poles—even making a stop at the Vatican—the film begins to propose that anti-Semitism is a conspiracy of the Jews and not against them, that anti-Semitism is, in fact, the “religion” of secular Jews, that there is an “agenda of being Jewish,” as one rabbi in Kiev states, when challenged about not rising to the bait of supposedly virulent Russian hatred toward his own people. All of this, needless to say, got my full attention. 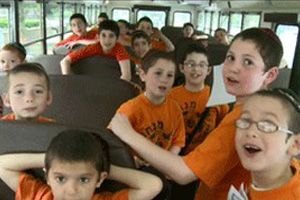 This subject matter deserves a rigorous and unflinching approach. As Arab-Israeli conflict scholar, Avi Shlaim, says, “Nations, like individuals, are capable of acting rationally after they have exhausted all other options,” and the nations of Israel and America happen to be the worst culprits of this particular irrationality. I will say that it made me feel, at times, anti-Semitic about my own people and, in all honesty, it hasn’t been the first time I’ve felt that way. A few times in my life, I’ve come to the conclusion, that someone who dedicates him- or herself pretty much full-time to fighting anti-Semitism, is a self-hating Jew. This film only reiterated that feeling. And made me question if I am one, too.

The worst culprits, to my mind, in this whole shebang, are the leaders who take Israeli high-schoolers on concentration camp “tours.” There is one scene, in particular, that made my blood run cold: they are all staying at a hotel in Poland near Auschwitz, partying and carrying on as teenagers are wont to do. Trying to control the mayhem, the adults that are supervising them tell them that there are anti-Semites right outside the hotel’s doors ready to do them harm, or physically attack them so they need to lock all the windows and doors and be quiet and stay inside, like the squealing three pigs hiding from the Big Bad Wolf.

And so another generation of “modern” Jew learns to be ashamed of her own bloodline. It’s abhorrent how these young people are, purposely, given a set of suppositions that don’t quite tell the whole story, while conveniently “differentiating” the current pogrom transpiring on their back doorstep from the ones perpetrated on their forebears. (These are kids who will be doing mandatory army service in a very short time, remember.) Nor are they given any means to discover nuance and complexity, nor an ability to step back from the “representation” of events to find deeper truths about who they are and where they stand in the world. Infuriating.

The second culprits are the American-Jewish leaders out of the Anti-Defamation League headquartered here in New York, the grand poobah, one Mr. Abe Foxman. The things that come out of his (and his minions’) mouths have to be heard to be believed. They personify the worst kind of hubristic ignorance. And they’re extremely well endowed, which means they’re powerful.

And then there is the pariah, played by the not-so-powerful Mr. Norman Finkelstein, raging man wandering in the desert, an outcast from his own community—fired from his post as assistant professor at DePaul University in Chicago after writing a book called The Holocaust Industry: Reflections on the Exploitation of Jewish Suffering. Finkelstein is also banned from Israel, literally not allowed inside the Jewish State, founded as a place where every Jew on the planet can find refuge, if need be! And, this is the man who makes the most sense, angry and vitriolic as he is. He and Shamir have the most riveting encounters and it is Finkelstein who challenges Shamir to divulge the real “agenda” of his own film.

Defamation is a fascinating, infuriating and, ultimately, depressing treatise on Judaism, politics and the multi-layered relationship that America has with Israel. It is also vital and timely. If you want to understand something about this relationship between modern middle-class American Jewry and the current (sorry) state of the Jewish Homeland, you should see this film. Take your children, and your children’s children, with you when you do.