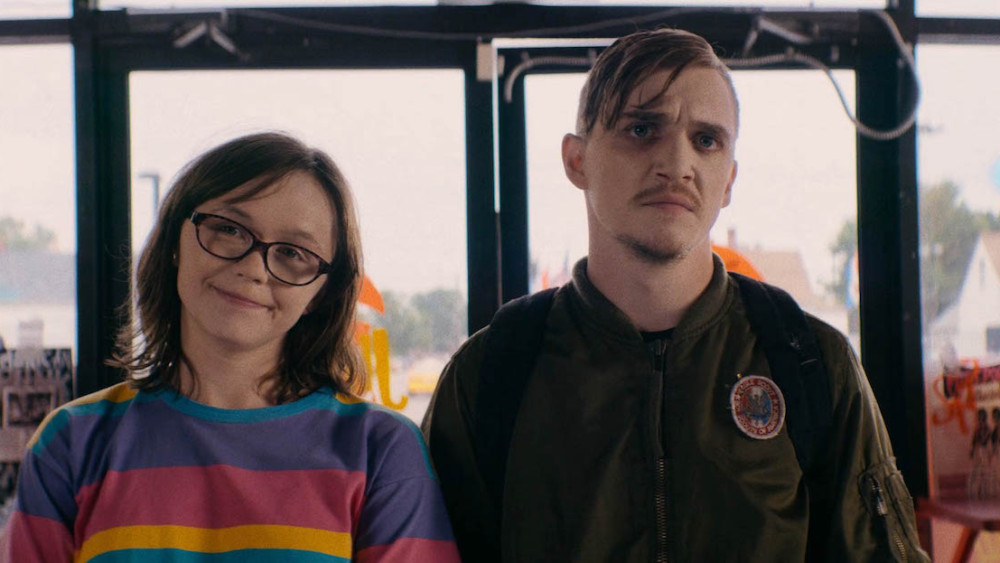 Punk is not dead, apparently. It lives on in Adam Carter Rehmeier’s gut-busting Dinner in America, a foul-mouthed, at times odious and odorous odyssey through thoroughly fucked-up suburbia. There’s both spit-spewing and saliva-swapping, dead cats, broken glass and multiple fires. But what elevates Dinner above its more pulpy elements is the sweetness of the leads. Kyle Gallner and Emily Skeggs have terrific chemistry and pull off the difficult task of making unstable weirdos likable. Gallner’s Simon is an equal-opportunity offender, and makes no effort to quell any bad situation, instead raising the tension with his temper and making things worse. This can take a little while to warm up to if you lack punk tendencies, but by the end it won’t matter because you’ll be so won over by Gallner’s performance that the obscenities become part of his charm.

After flunking out of an experimental drug test, Simon crashes a family dinner, makes out with the mom, Betty (Lea Thompson), and escapes the wrath of the husband and son by crashing through their dining room window and lighting the front yard on fire. It’s a fitting introduction to a character whose likability is intertwined with his abrasiveness. While on the run from the cops he spies Patty (Emily Skeggs), and decides to hole up with her and her family under the guise of a Christian missionary just returned from Tanzania.

The 2nd dinner in Dinner in America goes a little bit smoother, but it’s not long before he spills the beans to their adopted son (Griffin Gluck). Patty reveals to Simon that she has a crush on the masked lead singer of PsyOps, a local punk band she plans to see live later that week. It’s no surprise (to the audience at least) that Simon is that lead singer and Rehmeier gets a lot of mileage out of the dramatic irony of Patty not knowing. The chemistry of the leads is undeniable as they fight off bullies, make a song together, and attend a third dinner (more of a brunch really) with yet another family whose identity I won’t spoil here.

For Gallner this could be a breakout role. His intensity is amplified by fast pacing, sudden camera zooms, and a rollicking soundtrack. There’s no lack of energy, and the propulsive script is a highlight even if some of the more offensive language may make you wince. This is supposed to be punk rock, remember?! Definitely a hard R-rating. The supporting cast is terrific across the board, filling out the suburban tropes with game absurdity. Patty’s parents (Pat Healy and Mary Lynn Rajskub) provide a few catchphrases like, ‘Take it down a notch,’ that get bigger and bigger laughs the more they are repeated.

Comparisons have been made to Napoleon Dynamite, which seems fair given the fact they are both Sundance oddities with a distinct style. Like that film, Dinner in America is a true discovery bound for cult-classic status. Kudos to the producers for taking such a bold chance on this film. There’s not much else out there like it, and that will help it stand out amongst much of the middle-of-the-road dreck. It may not be for everyone, but I give it two middle fingers way up.