THE CURBSIDE CRITERION: DEFENDING YOUR LIFE 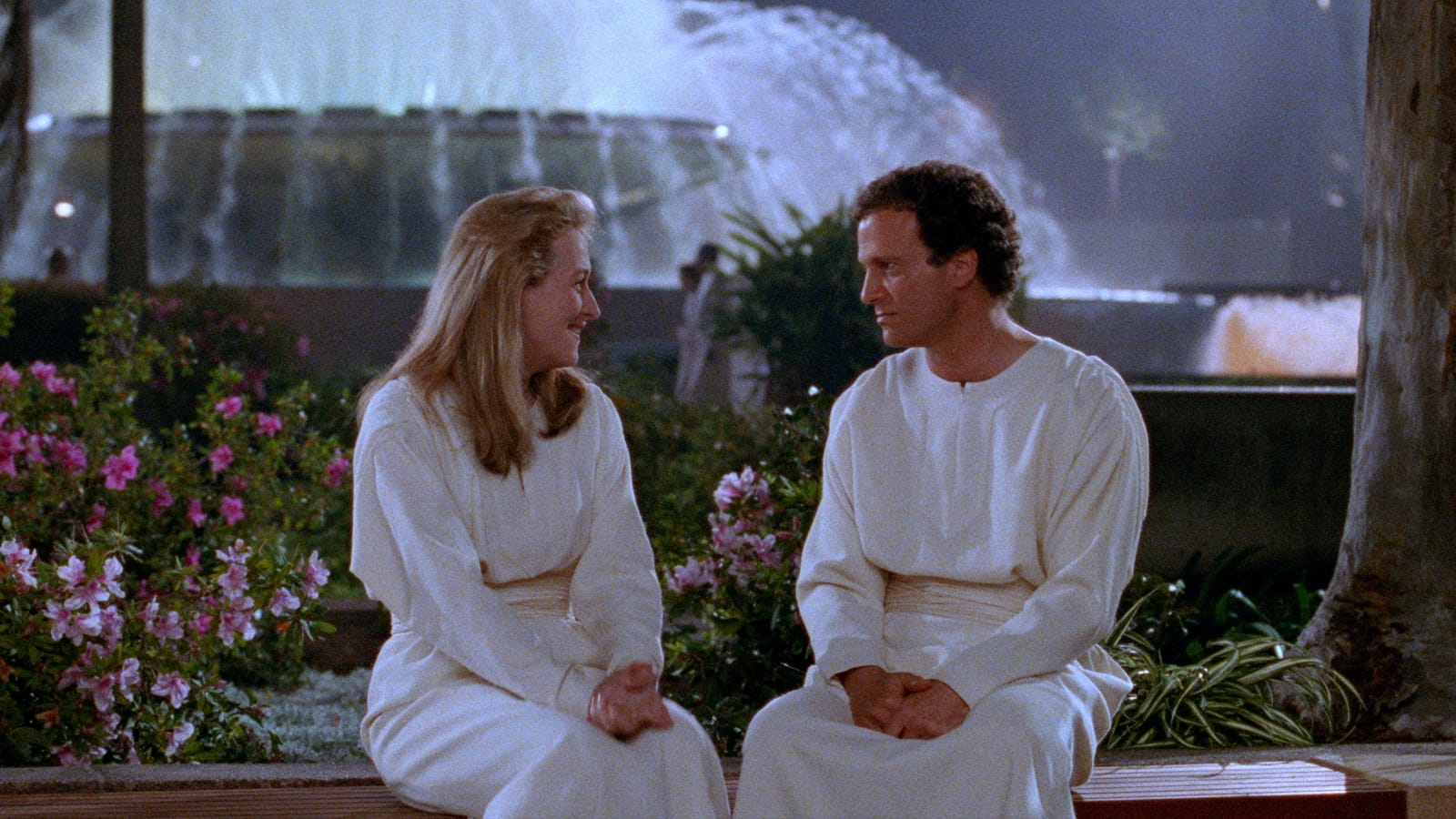 (Here at Hammer to Nail, we’re are all about true independent cinema. But we also have to tip our hat to the great films of yesteryear that continue to inspire filmmakers and cinephiles alike. This week , does Brad Cook believe in life after death after watching the Albert Brooks classic, Defending Your Life. Like what you see here on Hammer to Nail? Why not give just $1.00 per month via Patreon to help keep us going?)

Criterion’s second entry directed by Albert Brooks is Defending Your Life, a film that takes on the ancient question “Is there life after death?” and puts the comedian’s own wry spin on it. Brooks plays Daniel Miller, an advertising executive who leaves the office with a bunch of birthday presents only to take his eyes off the road and crash his new Mercedes head-on into a bus.

Daniel finds himself in Judgment City, where the newly dead must defend specific moments from their lives before two judges, with a prosecutor and a defense attorney on hand. If they’re successful, they either move on to the next place in the universe (this is never explained, which is fine) or are sent back to Earth to try again. If they need a do-over, their goal in the next life is to learn and increase their brain capacity to the point that they can successfully defend themselves next time.

While in the midst of his four-day trial, Daniel meets Julia, played by Meryl Streep with her usual aplomb. The two quickly fall in love, but Daniel discovers that Julia has led an exemplary life and will almost certainly be moving on to the next place, whereas the tone of his trial has led him to the conclusion that he’ll be going back to Earth.

As the middle act of the film unfolded, one thing that kept sticking out to me was that Daniel was being judged for a lack of bravery in his life, but the moments the prosecutor pointed to didn’t seem too damning: taking the blame for a friend’s misconduct but wilting under pressure with his father that evening, or getting stage fright before having to speak before a large crowd at an event.

And the film’s first act had done nothing to set that up. Daniel just seems like a regular guy before he gets hit by the bus. There’s no lack of bravery shown. Looking back at the first act, I would have preferred to see him truly show a lack of bravery, such as not standing up for a mistreated co-worker. In a similar vein, the moments he must defend feel like the kinds of things many of us have dealt with – it would have made more sense if those moments lacking bravery were bigger and bolder.

That said, Daniel’s actions during the film’s climax do feel earned, and I was glad there was a happy ending, but the lead-up to that moment was mostly pedestrian. In addition, I didn’t get a sense of much onscreen chemistry between the two leads, and there are a couple moments that made me cringe, such as when Daniel sees one of his past lives as a stereotypical African bushman running from a lion. Yeesh.

Criterion commissioned a new 4K digital restoration approved by Brooks for this Blu-ray release. The print has light grain, which is to be expected from a film that hit theaters in 1991, and overall it looks nice. At this point in home video history, you really have to nitpick most discs to find problems with image quality. I’m the type who feels that if nothing jumps out at me while watching, I’m good.

Moving on to the bonus features, Criterion included a fold-out with an essay by film historian and filmmaker Ari Aster, who clearly enjoyed Defending Your Life more than I did. The same can also be said of filmmaker (and Curb Your Enthusiasm producer) Robert Weide, who conducted a new, COVID-friendly remote interview with Brooks. It runs about 28 minutes and covers a wide range of subjects connected to the film, including the death of Brooks’ comedian father, who literally died onstage when Brooks was 11. Weide asks if that event inspired an in-film joke during a scene with a bad comedian, but Brooks says that wasn’t the case.

The other new bonus feature is a 21-minute discussion with theologian Donna Bowman, who examines the afterlife world created by Books. It’s an intriguing discussion that admittedly made me look at the film a bit differently afterward, although you shouldn’t have to watch a bonus feature to complete your thoughts on a movie. However, if you want to dig deep into the film’s themes, this is the place to do so.

The final bonus piece is 12 minutes of 1991 interviews conducted with Brooks and actors Lee Grant and Rip Torn for the show Crooks & Chase. There’s nothing major to uncover here, but they’re worthwhile discussions for fans. The film’s trailer rounds out the disc.