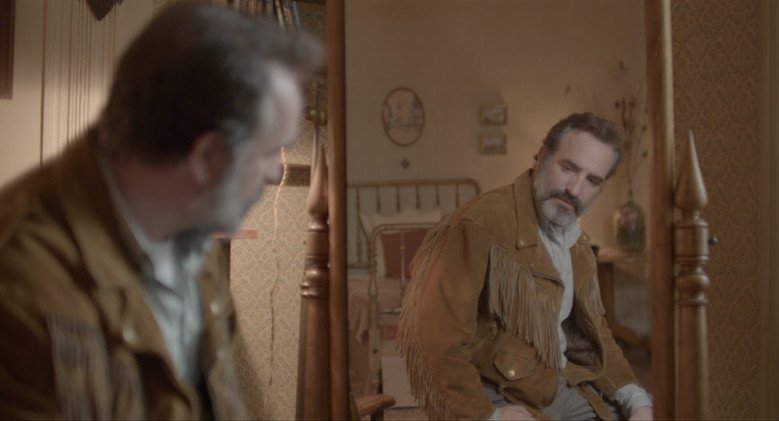 (Unlike many of the other films launching on VOD during the pandemic, Deerskin is being released today as part of Greenwich Entertainment’s virtual cinema partnership with theaters throughout the country. If you rent Deerskin 50% of the proceeds will benefit local cinemas. Like what you see here on Hammer to Nail? Why not pay just $1.00 per month via Patreon to help keep us going?)

Quentin Dupieux’s rambunctious, psychotic murder-comedy, Deerskin, marks the return of one of France’s most unique filmmakers working today. For those unfamiliar, Dupieux’s past work is largely defined by a surreal tongue in cheek attitude and his latest is no different. Deerskin details the disturbingly hilarious mental breakdown of an “aspiring filmmaker” as he becomes obsessed with a deerskin jacket. On a narrative level, the film plays like one big joke, yet it never disregards its audience or characters with a typical distancing cynicism seen in much of today’s avant-garde. Ironically, its obsessive commitment to its very wacky premise is what enables the film to rise above most experimental narrative cinema (although, at times it can feel gimmicky). Just as his film begins to fray at the seams, Dupieux is able to fasten it all back together. In fact, it is this very perception of the director’s faltering control and lack of focus that surprises us with some of this year’s most devilish gut punching hijinks dipped in morbid black comedy.

Deerskin follows a middle aged, creepy, naïve loner, Georges (Jean Dujardin), as he travails the countryside aimlessly, with his newly purchased deerskin jacket. He checks into a hotel he can’t afford using his wedding ring as collateral. Georges lies around, for what seems like hours and hours, having full-fledged existential conversations with his deerskin jacket. Their rapport and camaraderie parallels the character dynamics of Appatowian bromances. Hilarity, sadness and weirdness fill his room like heavy and musty dead air. Eventually, he breaks out into the night, ending up at the local bar where he meets the bartender, Denise (Adèle Haenel, Portrait of a Lady on Fire). Georges claims to be a filmmaker mid-production in order to impress her. Denise, intense and un-ironic, reveals she is a film editor in her spare time, and just like that another unlikely partnership forms. Soon, Georges adopts his retro camcorder as his eye. He starts filming chaotically silly and increasingly discomforting scenes with his co-director: his deerskin jacket. Haenel is tasked with editing and making sense of Georges random footage. Oddly enough, she decides to fund his bizarre film with her personal savings. Eventually, Georges’ brain embraces more evil urges. His deerskin partner convinces him to begin killing anyone he sees wearing a jacket.

Visually, Deerskin is a monochromatic vision of brownness. Dupeiux (who DP’ed, edited, wrote, and directed) captures landscapes, nothingness, and aimlessness through distant framing of his subjects; allowing the characters just enough space to breathe in this high-concept lark. For the most part, his camera remains static; dialing down cinematographic showiness in exchange for an idiosyncratic, creeping and textured tone basking in stillness. It’s a film that capitalizes on punchlines and tonal shifts by breaking up its eeriness with hilarity and absurdity. The acting is also a major highlight; Dujardin and Haenel give some of the most committed performances this year. Their unwavering seriousness provide the necessary stable core for this prickly odd-ball dark comedy to succeed.

Deerskin is clearly set to be a cult film. It ticks all of the boxes necessary to please fans of this space. Dupieux’s film is so marvelously deranged and comically strange that its repetitiveness is forgiven. Ultimately, Deerskin is a sinister piece of genre filmmaking that plays its one note concept to near exhaustion. But, luckily for us it’s a virtuoso performance.