(Dazed and Confused was released in 1993. It is now available on Blu-ray

—and still available on DVD

Not a lot happens in Dazed and Confused, but there’s a lot going on. To wit, the premise of Richard Linklater’s second film—a cross-section of high schoolers in 1976 Texas ring in the first day of summer vacation—is decidedly simple, yet it allows the filmmaker to go off on any number of tangents, all of which revolve around the central premise of killing time while you still can. These activities range from the mellow (sipping beers, driving around, listening to tunes) to the ridiculous (hazing freshman via the business end of a paddle, mailbox baseball, getting shot at), and ultimately serve as mere prelude to one massive party by the nameless town’s water tower. What the film quietly says along the way is so tapped in to the zeitgeist that it has become almost as notable an artifact of ’70s culture as the artifacts it affectionately plays off of. Dazed and Confused does more than just reference the music, TV, and politics of its day; it absorbs them, thereby becoming more than the sum of its parts.

Taking place on the eve of America’s bicentennial—the celebration of which, one teacher reminds her students, is championing “aristocratic, slave-owning white males who didn’t want to pay their taxes”—and featuring one character who has a sex dream involving a woman’s body attached to the head of Abraham Lincoln, the film may be thought of as a piece of countercultural Americana. Independence Day is only weeks away and some of the younger kids play baseball, but the implications of these red-white-and-blue diversions are never explicitly commented on. So it isn’t an absence of darker, more serious shades that defines the film, but rather the ability to look past them and focus on the good times. The hazing, for instance, is treated more as an extremely up-close-and-personal way of making friends rather than the archaic method of bullying it more often is; similarly, Linklater doesn’t skirt over the inherent awkwardness of this kind of party, instead treating it as another rite of passage to grin and bear. He funnels all the non-sequiturs and bizarre chatter of the meandering Slacker into a more streamlined take on the sly means teenagers employ to connect to one another when overt communication is too difficult. They drink, they joke, they fight. That Linklater is far more interested in the various ways people come together than how and when they drift apart is part of what makes the film so enjoyable, but it also identifies him as a humanist. He doesn’t trot his characters out as the butt of an in-hindsight joke; he sympathizes with them greatly. 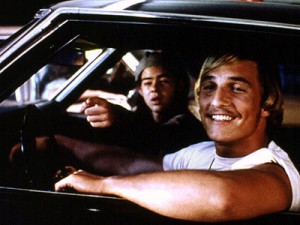 Wooderson (Matthew McConaughey), perhaps the film’s funniest character, is in a way also its saddest: he’s the only real insight we have into what awaits many of these young men and women once they graduate. Certainly some will move on to bigger and better things, but what about those who don’t? This is a small town with, we can assume, few real opportunities for young adults. The future looms large in Dazed and Confused—indeed, it’s one of the main topics of discussion for all involved—but, perhaps to the benefit of many of its characters and because the entire story takes place over a 24-hour period, never quite arrives. Linklater doesn’t have to spell it out for us to understand that several of these people are peaking early, granting a “last hurrah” feel to the otherwise joyous goings on. There’s an inherent irony to setting a film fifteen years prior to the time it’s made and then having its characters anticipate the future (the ’80s will be awesome, one girl argues, because every other decade is, and the ’70s “clearly sucked”), but Linklater doesn’t use this as a means of mocking his characters’ aspirations. He sees something worth recording and, if anything, admires this hopeful anticipation of what lies ahead. The film’s final image, of the open road stretching in front of a moving car, is Linklater’s most direct address on this point, but it’s preceded by countless others which, though less explicit, betray a similar optimism.

At the same time as he celebrates it, Linklater also anticipates the passing of these good times. This is, after all, a period piece, and there’s always a bittersweet vibe to even the most rose-tinted nostalgia. Hinted at throughout, this finds its clearest expression near the end of the film, when the party has died down and the attendees have once again split into groups. “I just want to look back and say that I did the best I could while I was stuck in this place,” one of them says. Dazed and Confused‘s main cast is interesting in that, while one half is just now entering high school, the other is approaching their final year. Linklater is thus able to tap into the wide-eyed naivete of his younger characters at the same time as he contrasts it with the cocksure knowingness of his older ones. And though it’s easy, as a viewer, to think of them all as being naïve, that’s part of the fun—they don’t know what tomorrow holds and, at least for one night, they don’t have to care, either. 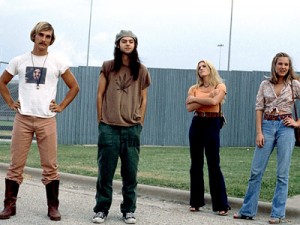 Blu-ray Audio/Visual: Through the haze of pot smoke and beer goggles, Dazed and Confused is actually quite nice to look at. Everything from the big blue Texas sky to the retro stylings is vividly rendered by this 1080p transfer, which lends a clarity to the sometimes fuzzy visuals. Colors pop without being garish, and detail comes through while still maintaining a natural look. The lossless DTS-HD Master Audio 5.1 track makes the film’s iconic soundtrack more sonorous than ever, and every single off-the-cuff remark—which, as in Slacker, are both crucial to building a particular mood and easy to miss—is similarly clear.

Supplements: There are hours upon hours of goodies here: a commentary track with Linklater, 17 deleted scenes, a 46-minute making-of documentary, audition tapes and other behind-the-scenes footage, interviews with Linklater and nearly every member of the cast, and an illustrated booklet complete with a mini poster. Lest you think quantity comes at the expense of quality, it bears mention that, if not always supremely insightful, the extras are further evidence that Dazed and Confused, while satisfying as a comedy, is also a unique time capsule of both the time it depicts and the time it was made.