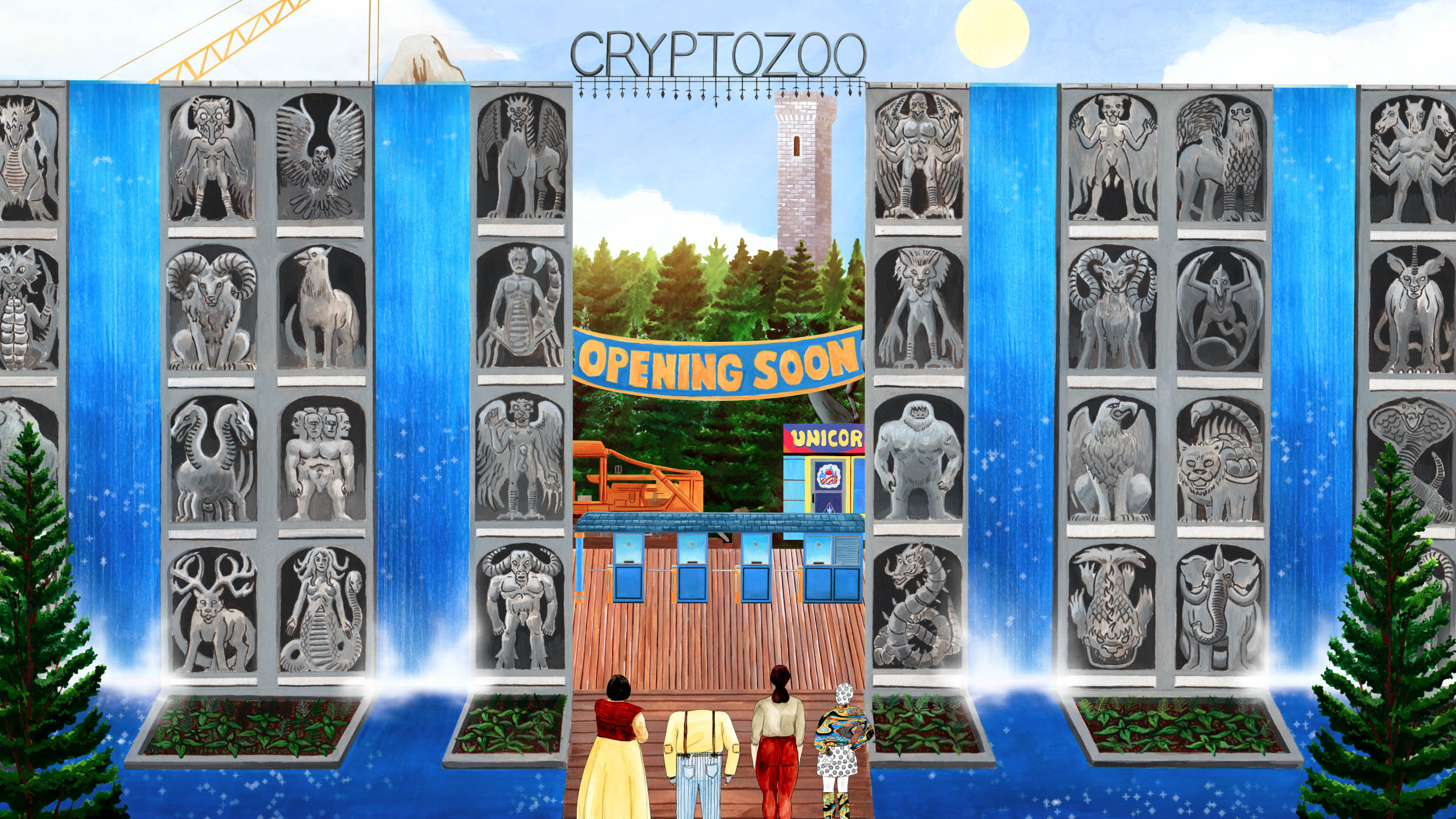 I’m a bit like David Duchovny in that “I want to believe.” ‘Ghosts, Ancient Aliens Lost Civilizations, ESP, telekinesis I believe it all. Do I believe in Unicorns? Or dragons? or Bigfoot or the yeti? Probably not, but that doesn’t change the fact that I would like to believe in them. I did schedule a whole day of my trip to Scotland to visit Loch Ness and search for the monster. These creatures, and countless other that different cultures have given us our Cryptid, mythological creatures for which no definitive proof has ever been found. They have served storytellers for years as a metaphor for the unattainable, for that which remains wild, for that which is beyond us.

In Dash Shaw‘s new film Cryptozoo, the Cryptids drive the plot of a film that’s really more about our need to dominate and control that which we regard as the “other.” The film opens with two lovers naked in the wilderness, free of the trappings of society. When they discover a 10-story barrier they are for some reason inclined to climb – without returning to put their clothes on – they come face-to-face with the unknown, a unicorn that’s being kept in this fenced-in sanctuary. Fascinated by the creature, they immediately go to him and attempt to pet it as if it was some sort of domesticated pet from their normal life. The Unicorn freaks out and drives its horn through the chest of the boyfriend, proving this is no Disney film, as if the naked people fucking didn’t tell that to us already. As the story progresses, we find out that the sanctuary is a project from a wealthy benefactor named Joan (Grace Zabriskie) who is attempting to open an amusement park-like destination so that normal people can interact with mythical creatures and begin the process of socializing them. It’s very easy to see that her goal is just a larger version of the attempt made by the lovers to treat the Unicorn as part of their world. Finally, we have our hero Lauren (Lake Bell) who is searching the world to bring Cryptids back to the zoo so they can live safely. Her deepest desire, however, is to find the Baku, a creature that ate her nightmares at a young age.

Dash Shaw fills the minutes of his film with so many ideas that one would be forgiven for closing their eyes and just listening to the philosophical arguments playing out. However, in doing so, you would miss the gorgeous hand-crafted animation that gives the Film It’s Unique Look And Heart. Like His Last Film My Entire High School Sinking Into The Sea, Shaw is telling complicated stories, ones that would take millions of dollars to film as traditional cinema. Instead, he can allow his creativity and that of Animation Director Jane Samborski to follow whatever fancy suits them – whether it’s filling the screen with kaleidoscopic imagery or a Michael-Bay-level Man vs Monster Explosions and Escape sequences. This is the kind of film that needs to be dissected upon repeat viewing yet still tickles the soul enough to draw you in to its Jurassic-Park-influence action Adventure storyline.

I can’t speak too much for the artist’s intent of the film as I can only experience it as I did from my particular viewpoint. The entire process of trying to take something beautiful and magical and conforming it to reach societal acceptance, essentially robbing it of its mystique, is not only misguided but also terribly harmful. The film weighs the advantages of acceptance against protection, raising, by the end of the film, the question of who needs protection from whom. This tale of otherness I could only understand through the lens of my own queerness. Sure, it might be easier if I learn to function the way society understands normalcy, but that robs me of my freedom, that robs me of me. Cryptozoo benefactor June, with all her best intentions to create safety, drains the creatures of what makes them special.

It’s a dense film that works on several different levels with great voice talent and a special score that supports the film by taking us to another place where anything is possible. The film is well-paced and always gives us something interesting to look at, soaking the screen in creativity in a way that a paint-by-number Pixar film can never hope to achieve. Although I don’t think the film lives up to Shaw’s debut, part of that may be having expectations as opposed to going in blind. Cryptozoo becomes the second entry in a genre of film that Dash Shaw seems to be inventing on his own. I just hope it doesn’t take him another five years to make the next one.