(We here at Hammer to Nail are all about true independent cinema. But we also have to tip our hat to the great films of yesteryear that continue to inspire filmmakers and cinephiles alike. This week, our “The Curbside Criterion” continues where HtN staff can trot out thoughts on the finest films ever made. Today Brad Cook shoots up the new Criterion Blu-Ray release of Alex Cox’s beloved Sid & Nancy. )

I’ve always been fascinated by people like Sid Vicious who seem to lack any self-preservation instinct. Where Johnny Rotten created a public persona that was an exaggerated version of his private self, what you saw was pretty much what you got with Vicious. He really did seem determined to live fast, die young, and leave a pretty corpse.

Of course, Vicious had help from Nancy Spungen, a hanger-on who helped accelerate his downward spiral by encouraging his drug use. The two became locked in a damaged relationship that was arguably a murder-suicide pact, and both of them died young. The Sex Pistols were a short-lived band that broke up before Vicious died, but they helped inspire a new generation of punks in the 80s and 90s.

That’s the backdrop for Sid & Nancy, Alex Cox’s second feature film after the success of his cult hit film Repo Man. Starring Gary Oldman and Chloe Webb in the title roles, it opens near the end, in October 1978, with Vicious being questioned by the police after he found Spungen dead in their room at the Chelsea Hotel.

Cox then jumps back in time to early 1977, when manager Malcolm McLaren brought Vicious in to replace bassist Glen Matlock, despite the newcomer’s inability to play his instrument well. McLaren, who owned a clothing store called Sex at the time, was more interested in shock value, and he found the perfect combo in Vicious and Rotten (played by Andrew Schofield).

Like many other movies about famous musicians, Sid & Nancy plays a bit like a greatest hits collection as it dramatizes the Sex Pistols’ rise and fall and Vicious’s brief solo career. Spungen arrives on the scene and finds a willing partner in her self-destruction in Vicious. Meanwhile, the Sex Pistols have gained a reputation as one of the most over-the-top punk bands of their era, and they embark on a tumultuous tour of North America that ends in January 1978 with Rotten dissolving the group.

Vicious and Rotten clash many times, but the main dysfunctional relationship in the movie is the one between the title characters. Vicious and Spungen clearly love each other, but it’s a love buried deep below their damaged personalities. Watching their relationship careen from one crisis to the next is like watching a slow-motion train wreck – you know that’s where it’s headed even if you try to pretend you don’t know how their relationship ends.

As someone raised by a mentally unstable mother, I had some understanding of what the two were going through, although I’ve thankfully found myself to be genetically incapable of engaging in self-destructive behavior. The real life Johnny Rotten (real name: John Lydon) has trashed the movie, of course, but every biopic must walk a fine line between staying true to some version of history and serving the dramatic needs of its story.

That concept is on full display during Spungen’s fatal last night with Vicious. There have been many theories over the years about what happened, with plenty of people fingered as the possible real killer, but Cox reduces the events to their simplest form, presenting those moments as the inevitable conclusion of a relationship that was destined to end in tragedy. 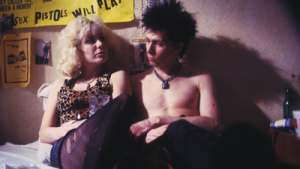 Sid & Nancy was previously part of Criterion’s library, first on laserdisc and later on DVD. MGM released a Blu-ray in 2011 – it featured two brief featurettes, neither of which are included here. This new Criterion Blu-ray features both old and new bonus features:

Criterion’s usual booklet rounds out this “film class in a box.” It includes archival photos of Sid and Nancy, an essay by writer Jon Savage from 1998, and a collection of material that Cox pulled together before working on the movie. That last part ends with a quote from Vicious, so I’ll let him have the last word in this review:

“I hate films. It’s pretense, it’s lies, it’s just shit. Like, if you filmed a day in the life of me, for instance … that is the most boring thing on earth. It makes me sick to think that people will act out parts and, you know, make it all seem larger than life, just so that some crud out there can get off on some fantasy: that life is wonderful and one day…”