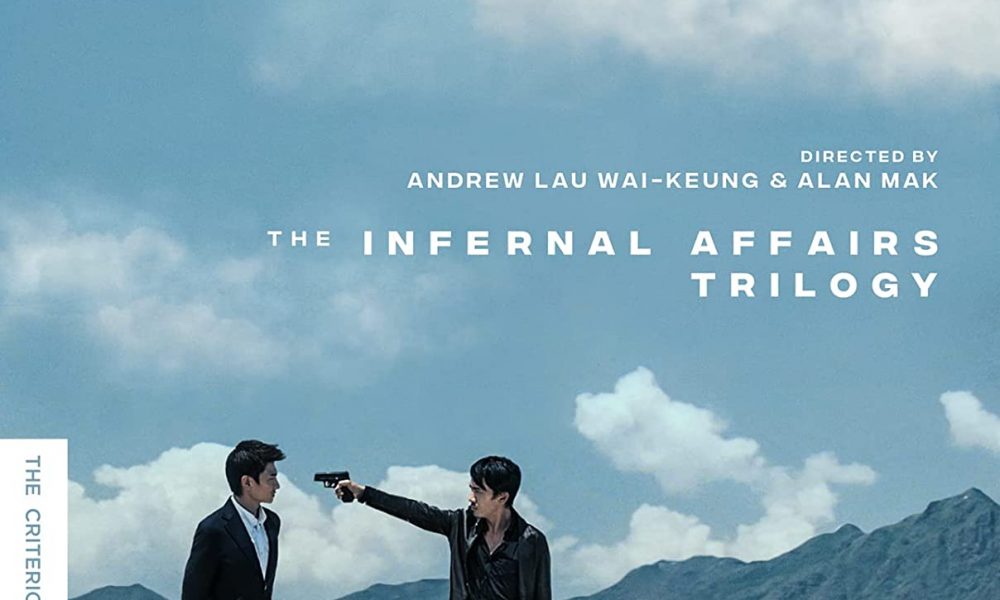 (Here at Hammer to Nail, we are all about true independent cinema. But we also have to tip our hat to the great films of yesteryear that continue to inspire filmmakers and cinephiles alike. This week, Brad Cook hits the streets of Hong Kong with the Criterion 4k Blu-Ray release of the Infernal Affairs trilogy.)

Pretty much everyone knows the influence of Japanese cinema, particularly the works of Akira Kurosawa, on American films, but Hong Kong cinema doesn’t get as much attention in the mainstream. And that’s interesting, given that the first film in the Infernal Affairs trilogy, released in 2002, was remade by Martin Scorsese as The Departed in 2006.

Infernal Affairs is a trilogy that explores the intersection of gangs and the police in Hong Kong, especially before and after China’s takeover of the former British colony. The first film stars two of Hong Kong’s top leading men, Tony Leung Chiu-wai and Andy Lau Tak-wah, as a police officer infiltrating a gang (Leung) and a gang member who joins the police force to spy on them for his boss (Lau). The plot is a twisty game of cat-and-mouse as each organization realizes it has a mole and tries to unmask him.

For Infernal Affairs II, directors Andrew Lau and Alan Mak created a prequel set shortly before England’s hand-over of Hong Kong to China in 1997. We encounter younger versions of many of the characters, including a previously unknown connection between two of them, but the story is less of a cat-and-mouse game and more of a character-driven examination of the idea of honor and living by a certain code, even if one is a gangster.

The trilogy concluded with Infernal Affairs III, which revisits the time period before the first film as well as what happened after it. Talking too much about the latter could spoil the ending of the first film, so I’ll just say that the lines between good and evil that seemed to exist in the first Infernal Affairs become smudgy blobs demonstrating that most people are not all good or all bad.

Criterion has issued the trilogy in a new Blu-ray set that boasts fresh 4K restorations of the films. I’ve read some complaints about the picture quality online, but having never seen this trilogy before, let alone taking it in on home video, I thought it looked really nice. I suppose your mileage may vary.

The extras are spread across the three platters, and Criterion included their usual booklet, which contains an overview of each film along with an essay by film critic Justin Chang.

The bonus features on the first disc lead off with an archival commentary track by the two directors, along with the pair of stars and other members of the cast. As you’d expect, they speak in Cantonese, with English subtitles. It’s a good discussion if you want to learn about the characters and the writing process, but not so much if you’re curious about the technical details of the making of the film.

Lau and Mak also sat down for a new 39-minute interview with Criterion. It’s a good overview of how they became friends, the early projects they worked on, and how they came to create the Infernal Affairs trilogy.

In addition, Mak, screenwriter Felix Chong, and Hong Kong International Film Festival director Peter Tsi appear in a 24-minute discussion from 2007, during which they dig into the socio-cultural environment in Hong Kong during the late 90s and early 2000s, as China took over.

Also included are a 15-minute making-of featurette, a nine-minute featurette with behind-the-scenes footage, outtakes, and a couple trailers. Finally, Criterion included a 20-minute alternate ending which was created to satisfy Chinese censors so the film could be shown in that country.

I’m not sure why so much footage was included, when only the very end of the film changed, but it’s still an interesting look at an alternate universe for the story. Of course, if it was actually the official ending, it would have upended what was done for the sequels, which is why it remains a curiosity.

Moving on to Infernal Affairs II, there’s a 22-minute making-of featurette that’s heavy on film footage and light on comments, along with another six-minute featurette containing behind-the-scenes footage. A commentary track with the directors and the screenwriter, three deleted scenes, and a trailer round out the platter.

Finally, Infernal Affairs III contains just a 13-minute making-of featurette  and 17 minutes of interviews with the cast and crew, along with the trailer. There’s no commentary track.