(You, The Living is now available on DVD through Tartan Films. Visit Andersson’s official website to learn more. You can also watch seven of Andersson’s award-winning commercials here.)

Swedish visionary Roy Andersson’s You, The Living might just be a masterpiece. Another years-in-the-making live-action cartoon opera—one shot took two months to stage, but more on that later—You, The Living finds Andersson grappling with life’s more serious issues: death, unrequited love, depression, financial woes, and even war. But unlike so many directors who confront modern European sorrow by burrowing further into bleakness and drama, Andersson subverts that exhausted pattern and delivers a strangely life-affirming comedy. You, The Living is surely unlike anything you’ve ever seen before—unless you’ve seen a previous Andersson film, that is.

With his latest feature-length opus, Andersson appears to have perfected his long gestating style, which I have come to term Andersson’s Law. Visually, he prefers to shoot in static, wide masters (if I recall correctly, his camera moves on only two or three occasions in this film). He rigidly adheres to a faded, drained color palette. But it’s in his novel approach to narrative—or lack thereof—where his work takes on a new dimension and feels more like classical music than traditional storytelling. In You, The Living, Andersson introduces a seemingly endless parade of emotionally teetering characters, though a few of these figures do return throughout to give some semblance of a story arc. Yet, even taking that into account, the effect is more of a multi-panel newspaper cartoon than a fictional narrative feature. This will undoubtedly test some viewers’ patience, but for those who are able to open up their stomachs in addition to their brains, You, The Living will soar.

As for those sorrowful, teetering characters, Andersson does his best to cover every Swedish type: a hopelessly depressed alcoholic biker chick and her befuddled boyfriend; the individual members of a Dixieland jazz band as they practice alone and together; a goth teenager who’s in love with a guitar player who causes her to daydream of a blissful marriage; a frustrated immigrant barber who shaves the head of a businessman; that now shaven-headed man in a meeting where his boss has a heart attack; a man so concerned with his finances that he thinks aloud about them while having sex with his wife; a man who dreams of flubbing the tablecloth trick at a dinner party (of Nazis???) and is executed for it; a well-respected father whose son can’t seem to get it together; a poor man trying to buy a train ticket who keeps choosing the wrong line; and that’s just the beginning. He even brings nature into the mix, in the form of a torrential downpour, which forces an already cranky bartender to unleash his disappointment on the bums who have found temporary shelter there.

Those aforementioned dream sequences add a measure of surreality to the proceedings, but the funny thing here is that, in the context of Andersson’s already surreal waking world, they don’t appear that far removed from one another. Rather than creating an ultra-obvious disparity between the two, this has the effect of making each universe—the conscious and unconscious—feel one in the same, adding a much-needed layer of genuine emotional grounding to both. 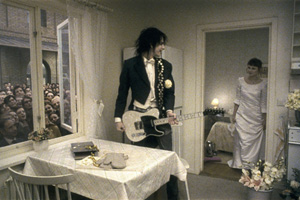 While You, The Living is filled with striking visual sequences (and when I say filled with I mean filled with), one towers above not just the rest, but over most of the epic one-takes that you can name. This is the shot that Andersson confesses took two months to execute, as he built a gargantuan set to allow for such a dreamlike miracle to unfurl. In it, the young goth girl and the man of her dreams have just been married. He sits in the kitchen, noodling away on his guitar, eventually soloing along to the film’s recurrent theme (which we hear throughout in both classical and Dixieland modes). She takes off her shoes in the bedroom behind him and opens a wedding gift. Gradually, one realizes that outside the left window, the world has begun to roll past. Their apartment is actually a moving train. For what feels like a very long time, they roll along, and as they pull into a station, an excited crowd surrounds them to cheer their union. The girl, who has lived her life feeling unloved and uncared for, is stunned by this outpouring of love. At this point, we know we’re watching a dream, but the sincerity with which Andersson executes it, not to mention the painful return to reality, creates an unexpected sense of sorrow. This sequence alone makes You, The Living an absolute must-see.

Another powerful dream bookends the film. At the very beginning, a man recounts, directly into the camera, a dream he had, in which bombers have appeared in the sky to start another war. Later, as the film winds to a close, those bombers do, in fact, arrive, leading one to wonder: was the previous 95 minutes all just a glorious dream? Or were the preceding situations real and this breathtaking vision was just Andersson’s delayed presentation of that dream? The truth is that the answer to that question is irrelevant. What matters is the emotion contained within those 95 minutes. Sadly, absurdly, sweetly, funnily, every single one of them is achingly real.

(I debated whether or not to embed the following clip, but watching it again on the small screen has only made me want to pay to see it on the big screen. I’m trusting that it will have the same impact on you.)