Best of
Comedy
Drama
On DVD

PLEASURE OF BEING ROBBED, THE

(Distributed by IFC Films, The Pleasure of Being Robbed is now available on DVD

The discovery of a fresh new directorial talent never fails to excite and inspire. After producing a staggering amount of stellar short film work over the past several years (most notably We’re Going to the Zoo and The Back of Her Head), Josh Safdie makes an assured feature film debut with The Pleasure of Being Robbed. From the opening scene, which follows starlet Eleonore Hendricks as she pulls a creative purse heist on a New York City street, it is immediately clear that The Pleasure of Being Robbed is the work of an individual who has grown up watching great movies and has incorporated those influences into his own unique vision. But most importantly, unlike so many other young filmmakers—and lesser filmmakers in general—Safdie never succumbs to his influences. The Pleasure of Being Robbed is a refreshing and original work, which manages to stay grounded in the emotions of the real world while somehow floating above reality with a magical and ethereal air.

Age shouldn’t have anything to do with the discussion, but it’s virtually impossible to dismiss the fact that Josh Safdie is only twenty-three years old. The Pleasure of Being Robbed was clearly made by someone with a boundless amount of youthful spirit and energy, but there’s an underlying maturity and assurance with regards to the filmmaking that makes his age such a revelation (one must also credit his equally youthful collaborative team, including cinematographer/co-editor/co-producer Brett Jutkiewicz and production designer/co-producer Samuel Lisenco). Combined with Safdie’s short films, it is apparent that The Pleasure of Being Robbed is no fluke. This is the work of an inspired talent who is expressing himself in his own unique way.

The story follows a young New York City woman who makes her way through the world stealing in a variety of ways. Is it a blatant case of kleptomania? Is she simply bored? Is she psychologically damaged? It’s tough to tell. One recognizes some level of dysfunction in her actions, but the roots of her behavior are never explored. For some, this might feel underdeveloped. I, on the other hand, appreciate this murky approach to character. It’s hard to feel empathy for someone who steals cars and throws kittens and plucks grapes from a fruit stand, but it’s easier to want to keep watching when that someone is such a compelling presence. This is certainly the case with Hendricks, whose look and demeanor recalls the alluring actresses of the French New Wave. Depending upon one’s appreciation of Hendricks and her performance, this could create a divide in viewers (certainly nothing as extreme as David Thewlis’s Johnny in Naked, but along those lines). But that is what makes Safdie’s approach so refreshing. It is obvious that he is smitten with his co-writer/muse (going so far as to dedicate the film to her in his director’s statement), and while this is reflected in the way that he and Jutkiewicz photograph her, perhaps it is the same reason why he makes her character so indecipherable and, in many ways, condemnable. He’s daring us to fall in love with her too. 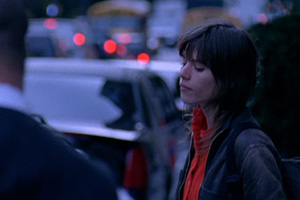 While The Pleasure of Being Robbed is short by most feature standards (just under seventy minutes), it nonetheless feels fully formed and complete. It also contains more dazzling invention than films twice its length. Safdie shoots ideas, both comical and dramatic, that would read as fantastical and outlandish on paper, on beautifully grainy super-16mm with a handheld, slapdash offhandedness, resulting in a world that exists in its own hyper-real universe (ala Michel Gondry and Spike Jonze). Like those directors (to varying degrees), Safdie is committed to the realism of his situations, first and foremost, shooting in actual convenience stores and ping-pong parlors and existing apartments to provide a gravity that keeps his film from floating into fantasyland.

Speaking of fantasyland, there is an unexpected dream sequence late in the film that is an absolute breath-stealer. At a time when most directors would turn on the quirkiness, Safdie chose to become extra immediate and intense, so much so that I questioned if what I was watching was, in fact, really happening, even though I knew it wasn’t possible. That’s an extreme example of his ability to ground the most impossible daydream, but he does this time and time again. Each new scene is alive in a way that most films are not.

Safdie is also a gifted actor, who carries none of the self-absorbed baggage that many low-budget actor/directors bring to their performances. His comic timing is impeccable, evidenced most hysterically in a scene where he tests out the cologne machine in a convenience store bathroom. There’s a humanity and warmth to his character that reflects his overriding spirit as a filmmaker. To Josh Safdie, life is funny, sad, realistic, and magical at the exact same time. Somehow, he has found a way to transfer that spirit to celluloid.

Whether or not Josh Safdie plans to graduate to films of much higher budgets remains to be seen. But in making this seamless, impressive leap from shorts to features, one thing is certain: whatever happens, it will be well worth watching.