Comedy
Horror
On DVD
On the Festival Circuit

(Murder Party screens on Sunday night, March 8th, at 11pm as the inaugural event in a brand new weekly screening series brought to you by Hammer to Nail and the Manhattan video store Cinema Nolita. The film will be followed by a Q&A with director Jeremy Saulnier and several members of the cast. Admission is $5. Cinema Nolita is located at 178 Mulberry St between Kenmare & Broome. Or, if you can’t make it to the screening, buy it at Amazon

Ironic horror is a tricky genre and one that is best left alone if you ask me. Although hordes of American horror movies try it every year, it’s tough to effectively both scare the shit out of an audience and provide enough ironic detachment via winking verbal cues and self-referential stylistic motifs to let them know it’s all meant to be laughed at. Most end up settling for one or the other (good recent example: Baghead, which is funny, but lacks the directorial style to be truly scary). Sure, from Val Lewton to Scream to Miike, filmmakers have been trying to do both, but few have been able to do it with the assured visual panache and joie de vivre of Jeremy Saulnier’s Slamdance Audience Award winning Murder Party.

It’s Halloween night in Williamsburg and a single black envelope is blowing down the street. A solitary nerd (Chris Sharp) comes upon it and discovers it’s an invitation to a Halloween Party. Dreading another night with his lazyboy and cat, he constructs a knight costume out of cardboard and ventures through the East Brooklyn night to an eerily empty warehouse, save half a dozen appropriately costumed hipsters. Either this is the lamest Halloween party in memory or something else entirely more sinister is going on. What our somewhat anonymous protag doesn’t yet know is that he’s walked into the Art Collective from Hell. I’d tell you more, but spoilers are for wimps. 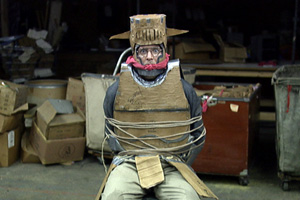 A chamber piece horror comedy that resembles The Breakfast Club more than Friday the 13th, Murder Party works very hard for the duration of its running time to never give you the comfort of knowing whether you should laugh or be genuinely disturbed. Skewering pretentious Williamsburg artists by giving them a proper bloodletting might seem sort of obvious, but proves to be delicious fun, especially when rendered by a cast and a director that are clearly having just as good a time. Saulnier’s mise en scene is effortlessly dynamic and made all the more impressive by the confined and not terribly expressive setting. Without dropping the M word, it is worth noting that while the filmmaking chops of working directors chronicling BoBo Brooklyn can sometimes lack luster (has anyone seen Alexander the Last yet?), with Murder Party, Saulnier reveals himself to be one of the more visually exciting indie finds of recent memory—someone who may, with more chances to direct, grow into a true stylist. His script is as filled with rocket-paced, witty banter as his standard def visuals (he shot the film himself, with props to ace steadicam op David Ellis) are laced with moments of ingenuous blocking and inventive use of long, moving takes. The cast, largely made up of talent Saulnier has been working with since grade school (they call themselves The Lab of Madness), are so deeply simpatico that Murder Party is one of the few genre films that I can’t imagine a single known face inhabiting.

The fact that the film has sailed far below the radar is a testament to the absurdity of the contemporary indie distribution landscape. Magnolia’s new specialty unit Magnet purchased the film after its festival run and released it straight to DVD; a pity since this film is smarter and more well observed than just about any horror movie Lions Gate or Dimension has dropped in the last few years. We’ll be sure to hear more from The Lab of Madness in the years ahead. Genre filmmaking sorely needs voices this fresh and uncompromising.