With Momma’s Man, Azazel Jacobs has shattered the promise of his wildly impressive The GoodTimesKid and delivered a statement of personal artistic expression so profound and moving that I am still holding back tears days after having seen it. While Jacobs’ film addresses many different issues and themes, for me what makes it so tear jerking is that it is the most beautiful and touching love letter to one’s parents (and, in turn, one’s childhood home) that I have ever watched, heard, or read. Momma’s Man is more than just a transcendent, extraordinary achievement in low-budget filmmaking. It is a work of rare, true artistry. I came to the 2008 Sundance Film Festival hoping to walk away with a film that I could champion. While I discovered a small handful of superior, exhilarating work, Momma’s Man is the type of experience that I wouldn’t have dreamed was imaginable. I have never been so affected by a motion picture in my life. I don’t want to merely champion this film. I want to order every single person I know to see it. I want to scream at every single distributor to buy it. I want to watch it again right now. Until then, I will replay it in my mind and let new tears stream down my awed, thankful face.

Much like The GoodTimesKid, to describe Momma’s Man is to sell it short. We’ve seen this story before far too many times (particularly at Sundance): An ambivalent thirty-something returns to his childhood home, sparking a crisis of paralysis that threatens to dissolve his marriage and send him into a state of eternal depression and confusion. But what makes Momma’s Man so different is that Jacobs’ initial purpose in making the film was to preserve and document the downtown loft space where he grew up, and where his parents continue to live. This means that the point of the movie has nothing to do with genre or story. It is to capture the inexpressible—dare I say unconquerable—feelings connected to one’s childhood and relationship with one’s parents, how we get older every year, but when it comes to our mommy, we will always be her sweet little boy.

Almost everyone I know who saw Momma’s Man considers it to be by far the best film they saw at the festival, but it’s interesting to discover that the only other people I know who shed tears over it were males. A further revelation is that most of the males who liked it but didn’t cry were from broken homes. Those of us who did cry have a loving mother and father who continue to live together in the childhood locations where we grew up. While I am convinced that one need not share a similar family structure with the one presented in Momma’s Man, I cannot deny that this film pierced me to my core and spoke to me in an eerily personal way. 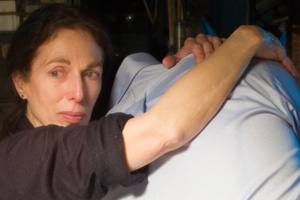 During pre-production, Jacobs became convinced that he had to cast his parents in the lead roles. To bring other actors into their home would feel forced and false. While his parents are devoted artists—his father Ken is a noted experimental filmmaker, his mother Flo a painter—they had never done any acting, and needed much goading from their (self-confessed) spoiled child to get them to commit. Thankfully, they did. They both deliver achingly honest performances that simply could not have been fabricated. For the entire second half of the film, any time they appeared on screen tears began to stream down my face. All I have to do is think of the line Mikey’s father says to him at the dinner table (“Son, when have we ever lied to you?”) and I will start crying again right now (you might not believe me, but I mean it—in fact, I am crying right now!). There is another shot of Ken and Flo sitting side-by-side at a table, manipulating the dimmer of an overhead lamp, which stole my breath and left me quivering. This moment is not just an example of American independent filmmaking at its finest. This moment is Ingmar Bergman. Not to mention the scene when Mikey’s mother forces him sit on her lap. As he collapses into her arms, her mind replays the childhood scene when he fell asleep at the dinner table on his plate of spaghetti (this is actually super-8 childhood footage of Azazel, taken from Ken’s acclaimed Star Spangled to Death). Any other director on Earth would have laid soft, pretty, sad music over this imagery. Jacobs, on the other hand, removes all sound at this climactic moment, a brave decision that adds even more sincerity and weight to the moment.

I’m such a fan of the charismatic Jacobs that I was disappointed to realize he wasn’t acting in the film alongside his parents. But it didn’t take me long to understand that he couldn’t have played the lead role. That would have been the worst decision of all (something a lesser artist would not have been able to understand). There had to be a level of remove. And so Jacobs created a character unlike himself in many ways, an uncreative, uninspired type who has an ordinary job and wife and child. He cast his friend, Matt Boren, to play the ultra-normal Mikey. Boren’s portrayal is deceptively accomplished and provides a much more interesting contrast to Jacobs’ artistic parents than Jacobs himself would have. In establishing this remove, Jacobs has done nothing to remove his personal connection to the material. If anything, he has simply made it more universal. Azazel Jacobs’ face doesn’t need to be on screen for us to see and feel his presence. His heart and soul are throbbing in every single frame of this heartbreakingly personal achievement.

Like Ronald Bronstein, whose Frownland was the film that I championed most in 2007 (and will continue to champion for years to come), Jacobs shares a commitment and dedication to an earlier era of independent filmmaking, where movies are shot on film (in the case of Frownland and Momma’s Man, super-16mm). Both of these supremely talented visionaries distance themselves from the other talented independent American directors out there by going that extra length. While digital video has come a long way, there is a difference in watching Momma’s Man and Frownland and a film shot on mini-DV, 24p, or HD. I consider Azazel Jacobs and Ronald Bronstein to be the best genuinely independent directors working in America today and I hope that their genius will influence aspiring filmmakers all over the world.

From the way I’ve been writing about Momma’s Man, one might think it’s a serious, sappy drama all the way through. It isn’t. It has, without a doubt, the funniest scene of recent memory (you’ll never listen to the Indigo Girls the same way again). The entire film is laced with a refreshing dose of naturalistic humor. For me, that is what makes Azazel Jacobs’ vision so exciting and extraordinary. He recognizes that life is a blend of humor and sadness, often at the very same time. While I consider Momma’s Man to be an achievement of a lifetime, I nonetheless believe that Jacobs will continue to make personal, profound, and moving work that incorporates elements of the avant-garde and independent cinema from every generation to tell universal stories and present profound universal emotions as honestly and directly as possible. To Jacobs, Momma’s Man is a home movie he can watch when his parents, and the loft, are gone. To me, it might very well be the finest American independent film of the decade.