I SELL THE DEAD

(I Sell the Dead is now available on DVD

and Blu-ray through MPI Home Video. It opened theatrically in New York City on August 7th, 2009, and Los Angeles on August 14th, 2009. It premiered On Demand via IFCInTheaters on August 12th, 2009. Visit the film’s official website for more detailed information. Note: This review was first published in January, 2009.)

I Sell the Dead was the opening night selection of the 15th Slamdance Film Festival. It’s the first film by writer/director/editor Glenn McQuaid, an established visual effects artist and cohort of prolific director/actor/producer Larry Fessenden (McQuaid coordinated the visual effects for Fessenden’s The Last Winter). I Sell the Dead is a cinematic marvel that is both an homage to classic horror films, as well as an innovative mash-up of several different horror tropes from subsequent generations. It’s all held together by the filmmaker’s true love of these genres, as well as his staggeringly impressive ability to direct tone, actors and special effects toward a singularly unique and innovative genre perspective.

The film stars Ron Perlman (Hellboy 2 and The Last Winter), Dominic Monaghan (Lost), Fessenden, and horror icon Angus Scrimm. Fessenden plays professional grave robber Willie Grimes, while Monaghan is his young trusty partner-in-crime, Arthur Blake. Set in a dark, Olde Dickensian turn-of-the-century England, the film follows this duo as they take to the misty moors to perpetuate their dark deeds after imbibing a few mugs of brew in the cave-like taverns on the city’s edge. Each night they earn their keep by digging up graves and wheeling the remains to the lab of a sinister mad doctor (played by Scrimm).

The pre-credit sequence opens with Willie Grimes being dragged to the gallows in the public square. Right up to the end he jokes and cajoles the crowd as the wood clamps down on his neck. He then stares into the bloody basket and the masked executioner lets the blade drop. Grimes’ decapitated head falls into the basket and stares back at the camera as the image turns to animation, music rises, and a fantastic animated credit sequence sets the tone for the Hammer-era film homage to come.

Monaghan’s character Arthur Blake is next visited in prison by the massive Father Duffy (Perlman) and urged to confess before he too is led to the gallows. Arthur begins the story of the infamous grave robbing duo and we travel with them both as they pass through a strange series of encounters with the undead. 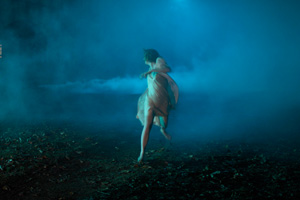 The film moves effortlessly through horror genres—from the beautiful, dark-haired, gossamer nightgown wearing vampires of early Mario Bava, to fog-drenched graveyard ghost hunters in the washed out color films from the mid-1960s, to the evocative bold 1980s Zombie genre circa Evil Dead 2. There is even a hilarious encounter with an undead Spielberg-esque ET! Each sequence employs lighting, camera placement and music that pitch perfectly captures the production value tendencies of that particular horror period. But this is far more than a mere genre mash-up collage; it is all held together by the hilarious buddy banter between a spot-on Fessenden and Monaghan. Not to mention a narrative velocity tied to the initiating story set-up that has Monaghan telling his Death March confession to Perlman like some sort of Dickensian Schezerade. The film moves with a darting confidence and it literally soars via the evocative and aggressive score by Jeff Grace. Cinematographer Richard Lopez expertly allows the Old England yellow-brown patina of the candle-lit village interiors to meld with icy blue fog-drenched moors at night. There are also some wide shot night exterior composites that are truly beautiful in that they are evocative and deliberately period artificial but not wink-wink smarmy fake. This a horror film lover’s wet dream, made by a team of genre lovers who worship this stuff. Unlike films like Black Dynamite, a blaxploitation mock-comedy in the midnight section of Sundance, I Sell the Dead recreates the genre past with respect and fanboy awe.

What is most amazing is that I Sell the Dead was all shot on a micro-budget in actual locations on Staten Island. The basic technical virtuosity of this endeavor, on this budget, is simply astounding. The Hammer-era narrative framework is bulging with McQuaid’s energy, talent and ambition, and where most genre films would rest on the laurels of fantastic evocative monsters and special effects, I Sell the Dead soars because there is a narrative skill that is not often seen in this genre. It’s not just mere recreation that has inspired these filmmakers; it’s the desire to weave a yarn that captures your imagination and leads you down a fog-drenched path into a moor of buried fears and unknown shadows. This narrative impulse is what most clearly distinguishes McQuaid as a major new talent to watch. I Sell the Dead delivers the goods. Let’s hope it gets picked up and finds the mainstream audience that it deserves.